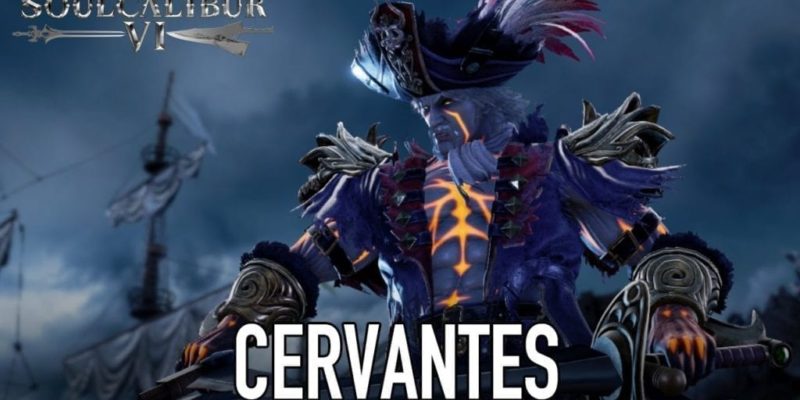 The time has come. Or should I say, Cervantes’ time has come. At last, after months of speculation and embarrassing complaining, Namco Bandai reveals the dread pirate is heading to Soulcalibur VI.

Of course, we already knew he was on the way. An art piece depicting the pirate was seen during an early game reveal. Oh, and then there was that whole leak we had earlier this month. Gameplay of both Cervantes and Raphael was recorded at an event in Melbourne. Nonetheless, it feels good to finally see our favorite angry swashbuckler make the cut.

Armed with his two blades, Acheron and Nirvana, Cervantes officially enters the arena. Of course, his inclusion was only natural. The pirate lord has been with the series since the very beginning, starting as the antagonist of 1995’s Soul Edge. Since his defeat and resurrection, he has cut a swath through enemies, all to make the dark blade his once more.

In Soulcalibur VI, Cervantes slices and dices opponents his opponents with a long sword and a dagger with a pistol in the hilt. With the two weapons combined, he slashes and stabs, and occasionally knocks his foe into the air and juggles using the flintlock pistol. He has a particularly nasty set of skills, belonging to a furious fighting style that has seen some evolution since his days in the original Soulcalibur.

From the video excerpt:

Consumed by the influence of the cursed sword, Cervantes once brought a reign of carnage around him. He now wields Acheron and Nirvana, a pirate’s longsword and a dagger hiding a pistol in its hilt, but thirsts for the power of Soul Edge…

Soulcalibur VI launches on October 19, 2018. It hits on the PlayStation 4, Xbox One, and has a digital-only release on PC. For more about the game, visit the official page.