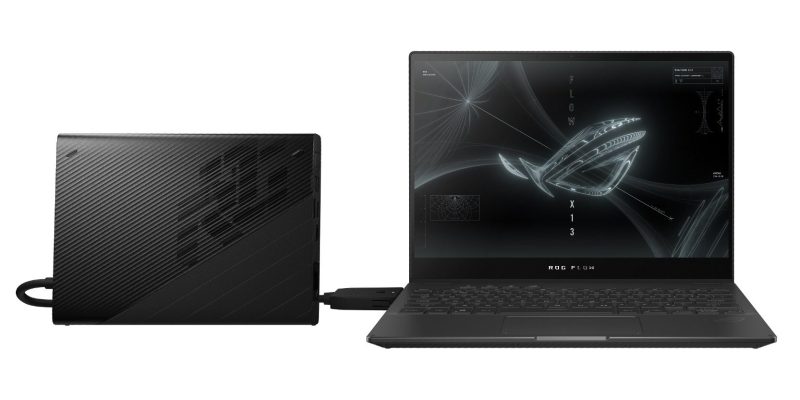 During its CES 2021 presentation on Tuesday, Asus unveiled what can only be viewed as one of the most unique gaming machines in quite some time with the announcement of the Asus ROG Flow X13. A slim notebook designed for both gaming and creative users, the ROG Flow X13 is a convertible 2-in-1 laptop with an added twist in the form of the XG Mobile eGPU.

Before getting into the eGPU, let’s talk about the computer itself. Releasing in Q1 2021, The ROG Flow X13 will support up to the AMD Ryzen 9 5980HS mobile CPU and have an internal Nvidia GeForce GTX 1650 graphics card. From a size standpoint, the ROG Flow X13 comes in at just .59-inches thick with a weight of just 2.87 lbs.

The notebook can be used in three configurations — standard, tent, and tablet — and includes a batter that allows up to 10 hours of video playback. There is also a newly designed cooling system that allows the ROG Flow X13 to have the maximum amount of airflow possible while reducing the amount of noise produced. Eighty-four fans with variable thickness allow more air movement with limited turbulence. The new cooling system, Asus says, will see drops of up to 7 degrees Celsius on the CPU and eight degrees on the GPU.

From a display standpoint, the laptop offers 1080p resolution with a 120 Hz refresh rate. Upping to 4K will see the refresh rate drop to 60 Hz. But that’s just the internal capabilities of the ROG Flow X13. The power of the laptop goes much higher when you add in the secret weapon ASUS dropped during its presentation.

The Asus XG Mobile eGPU is a 2.2-lb. piece of hardware that works as an external graphics card, power brick, and dock for the ROG Flow X13. The XG Mobile includes up to a mobile GeForce RTX 3080 graphics card, four USB 3.2 Type-A ports, a SD card reader, a Gigabit Ethernet port, and a separate USB 3.2 Gen 2 connection that allows speeds up to 10 Gbps. According to Asus, the custom-built connection interface will allow PCIe 3.0 speeds of up to 63Gbps, which is faster than competing Thunderbolt 4 eGPUs. 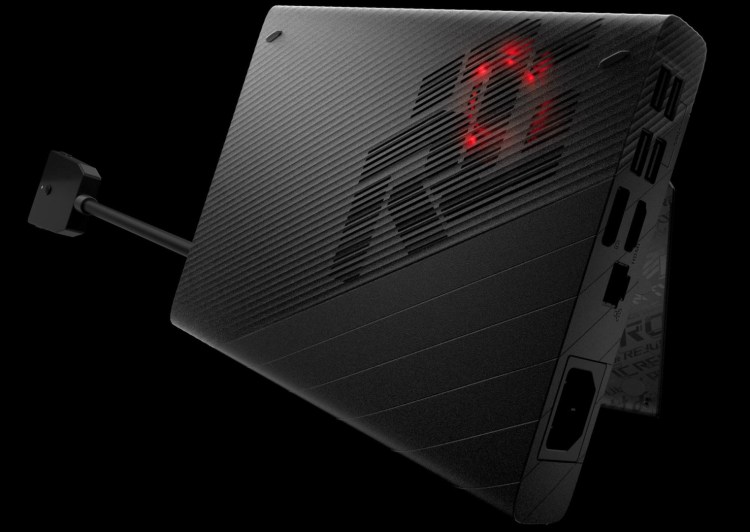 When docked, users can connect up to four displays with either DisplayPort 1.4 or HDMI 2.0a outputs. All of this is powered by a 280W adapter to make sure the performance is on par with other high-end machines.

As of now, the XG Mobile eGPU will only work with the ROG Flow X13, though it should be expected that other laptops will support it in the future. Prices of both the Asus ROG Flow X13 and XG Mobile eGPU weren’t announced during the reveal at CES 2021, but that information should come out over the new few weeks.