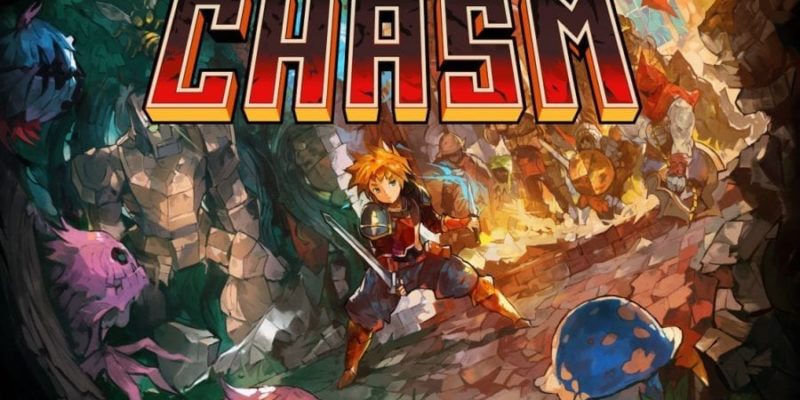 Chasm has been in development for the PC over the last five years. The initial Kickstarter was fulfilled, having exceeded the game’s initial goal by $41,000 thanks to nearly 7,000 backers. You can only guess, if the initial backers were anything like me, they were probably drawn to the 16-bit aesthetic visible in the development assets.

It takes quite a bit of endurance to hustle through a roguelike, procedural Metroidvania type game. Caverns start to sprawl like veins, opening one chamber to another and another. Chasm takes those queues from the genre, delivering an expansive exploration experience. The map allows you to drop breadcrumbs, so to speak, and mark areas that you might think are important later in the game. There’s no doubt that you will backtrack, backtrack, and backtrack through some more in its cavernous layout.

Even though Chasm does outfit its map with the ability to drop pins in rooms where you have been, you cannot, unfortunately, change the colors of those pins. Although this might seem like a great idea for someone like me that needs organization, it starts to become confusing as what you might have dropped the pin for in a certain room or area. Although this isn’t as important as the rest of the game, it’s one of a few instances where I felt the game could have improved in order to deliver a truly perfected Metroidvania experience. 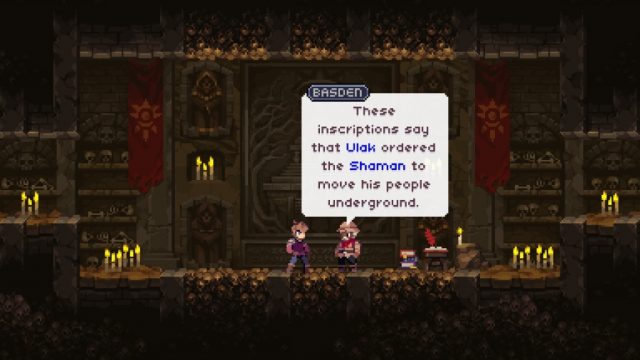 Chasm offers an extremely diverse assembly of enemies. Once you kill a specific enemy more than a few times they will become documented in your bestiary to be viewed later. Each has a unique attack pattern and ability to dodge in order to land a damaging hit. While the screen may not be flooded with enemies, any given room that has two or three can prove challenging. And in that sense, there is little to no hand-holding in terms of ramping up the game’s difficulty.

Even early on, your wits, skills, and ability to learn the game’s DNA are laid out in front of you. With the variations in enemies, and new ones introduced frequently, it’s crucial to start becoming well-acquainted with your move set and abilities, not to mention the various reading material that presents itself on your travels. Most of these documents discovered bring the narrative into focus, sometimes helping you solve puzzles with what has been transcribed.

Although the combat is fitting for the genre, I couldn’t help but feel it was a bit stiff in maneuverability. Jumping and striking feels akin to something like the NES Castlevania games. This leaves you locked in the same animation when jump and attacking. I felt as though the ability to turn and strike could have benefitted the sometimes annoying enemies who are far agiler than your character.

As new moves are learned, you will be able to jump, double-jump flip, and even cling to walls. Down the road, vaulting from walls also becomes a learned ability. But, the more I played the more I felt as though Chasm could have really survived without this addition. 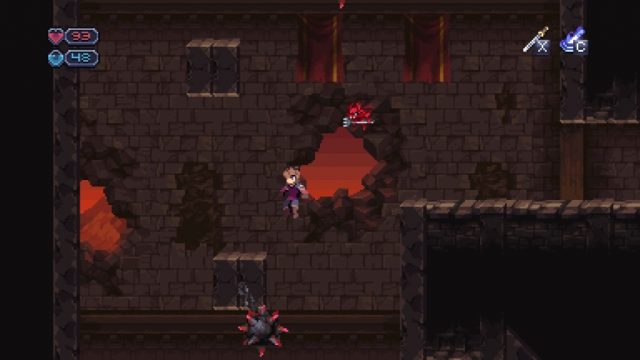 Unwanted leaps become troublesome and clumsy as enemies pursue you mid-air. Taking damage in the air will leave you falling back to the ground. If ledges are nearby, the probability of vaulting instead of simply latching on to a corner becomes higher when the move is introduced. You’ll often find yourself with sweaty palms as you leap from slivers of rocks. Platforming becomes risky in some areas, particularly if you haven’t saved in a while and can’t afford to take any more damage.

In Chasm, you’ll encounter a variety of different materials, armor, and weaponry. Each piece of armor, clothing, or accessory that you equip has varying levels of stat increases or decreases. Although you may be grinding to level up your character (I named my hero Scooter) you can also increase your attack power with the right armor, helmet, and sword combination. You’ll undoubtedly be swapping these throughout the game as you might need more defense-type material in some cases, or even need a stronger secondary attack for areas plagued by smaller enemies with heavy attack power.

Much of the focus of Chasm is on your skillset. You can choose new weapon modifications for secondary attacks and upgrade them in town. This also calls for you to return to the main hub of Karthas. You can forge new weapons in here, find them in hidden chests throughout levels, or acquire them randomly from defeated enemies. Things like a bone whip, mace, and even a trident are at your disposal. Although it may sound like there is a nice mix of weapons, I never really found there was something that I absolutely loved using. Sure the bone whip is cool to use early on. But, the lack of power soon makes it disposable. 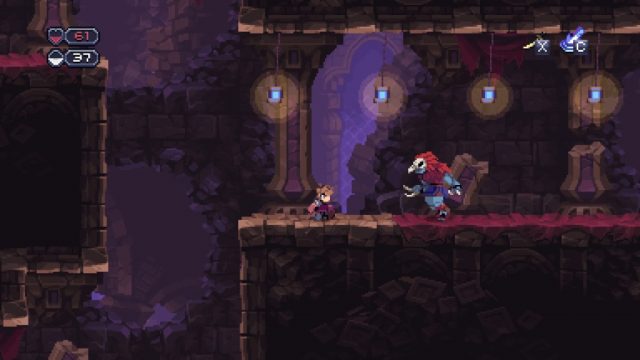 The weapons never really settle in or give that feeling of, “Aha, this is the one!” This might not sound like a bad thing considering the light RPG elements of the genre, but I do feel like it works against itself when you’re constantly wondering and searching for a weapon that feels like the end of the line, or the one that delivers contentment when heading into the final stages of the game.

The majority of your time spent in Chasm will be figuring out what comes next. A ledge appears in a new room you’ve discovered, but it’s just out of reach. Soon enough you will start to build out the powerups to get you to those previously unreachable areas. And then, before you know it, sometimes abruptly, you’re off to a boss battle.

Many standard Metroidvania games create a sense of epicness when it comes to boss encounter. You now have the thing to do the thing, and then it’s just enough to put your skills to the test for something that is 10 times your sprite’s size. The boss battles in Chasm don’t exactly deliver a feeling of triumph once completed. There isn’t a moment where you can stick your sword in their dead carcass, look back at your shrunken health bar, and really relish at the moment. Instead, boss battles are forgettable, nothing really being as challenging as the rest of the game. 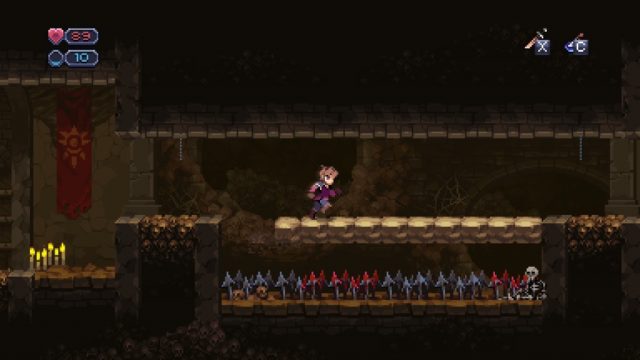 There are multiple characters to seek out and find as you continue your journey through the game’s levels. The Mines, Gardens, and Catacombs are just some of the different environments that you will explore. Although each area has its own set of secrets, areas to unlock, and hidden rooms to discover, much like the combat, Chasm never really finds its stride. Sure, there’s a lot to marvel at in terms of presentation, visuals, and art assets. The game brings with it one of the most nostalgic, 16-bit, SNES attitudes I’ve encountered in a long time. But, it also doesn’t deliver that special sense of achievement when everything’s said and done.

The majority in your time spent with Chasm will be exploring new caverns, caves, and marveling in the variety of enemies you’ve encountered. Although the game does an excellent job of reliving the 16-bit era glory days, it never really hits its stride in terms of player satisfaction.

You might find frustrations in the combat system, or never really finding that weapon that makes you think, “Yep, this is it. This is the one.”

There are a number of different armor pieces to discover and weapons to stockpile in your arsenal. New tonics and potions can also be carried with you on your journey in saving Karthas from the evil that lurks below. The evil isn’t necessarily in the boss battles that you encounter on your journeys. But rather, they are found in your lack of preparation and patience if you blow through each area without caution.

Chasm delivers a sense of nostalgia and polish with its visuals and design. Although these alone could set the stage for the rest of the game to showcase a fun experience, I never really found a great deal of satisfaction in completing it. Instead of it being a rollercoaster of difficulty that eventually evens out, it instead climbs and climbs, only to plateau and coast into the game’s ending.

Chasm is a retro-infused, Metroidvania style roguelike. Although it brings back many nostalgic feelings with its art style, there is much more to be desired and no real sense of accomplishment once you've completed the game.

‘Wizard of Legend’ sells half a million copies