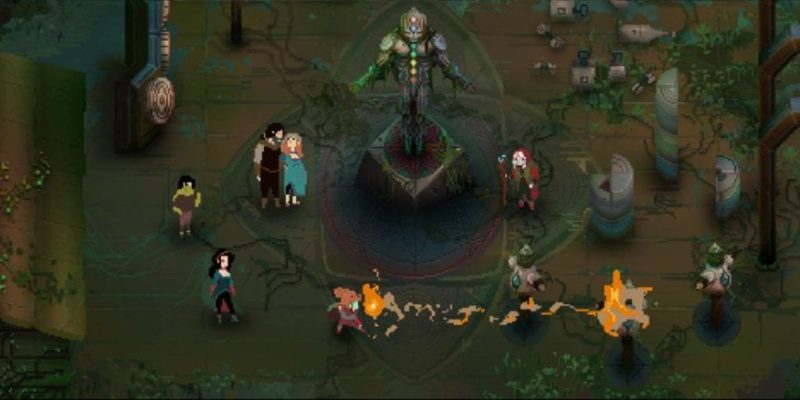 You can infer a lot about Children of Morta just from glancing at its screenshots. It’s a fantasy-themed twin-stick game with roguelite elements, yes. And it certainly has some of the most sumptuous pixel graphics I’ve seen in quite some time. What you can’t really tell is just how heavily it focuses on story and familial trials.

The children of Morta 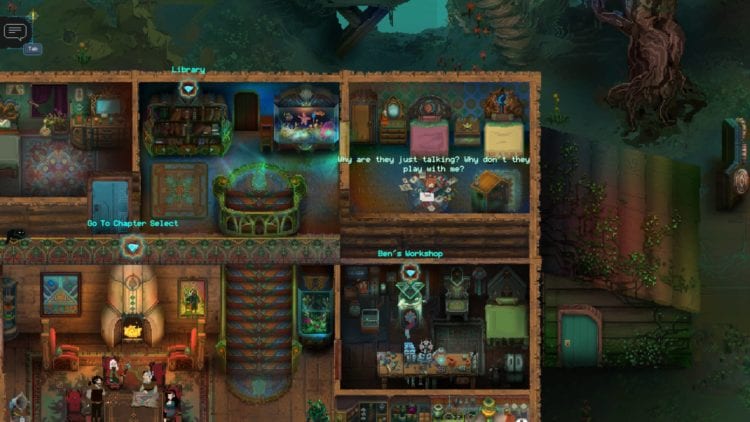 Between runs, you can pan around the house and click on members of the family to hear their thoughts – or just marvel at the art.

The Bergson family may be venturing into hellish dungeons, but they’re still a family. Their relationship dynamic is what gives Children of Morta a lot of its unique and heartfelt flavour.

The Bergsons are, specifically, a family of warriors. They’re the guardians of Mount Morta, charged with defending the world from the Corruption that periodically spews out of it. In true videogame fashion, the latest cycle has just begun: the Corruption is spreading, and the family is called to arms.

At the beginning, though, only two characters are actually called to arms: the father of the family, and the eldest daughter. The mother is heavily pregnant. The eldest son has left. The youngest son and daughter are both considered untrained. The uncle is wounded, and can’t directly fight. And grandma? Well, she’s a little old for the front lines.

At home with the Bergsons 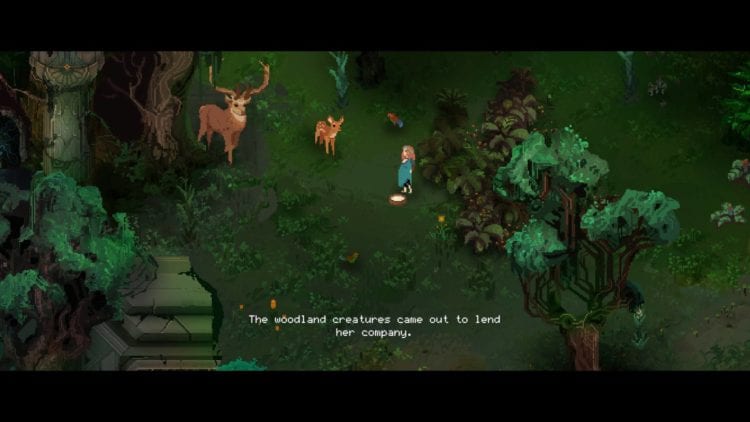 Not all of the scenes you’ll see are predicated upon success. Things change and time passes, even when you fail.

After every dungeon run – successful or otherwise – you’re back at the Bergson’s home, and you’ll likely have at least one cutscene waiting for you. It turns out that being forced into battling the forces of darkness can be quite hard on a family, but while the gameplay is in the dungeons, the heart is here. Whether it’s arguments and disagreements, worry over what’s coming, or joy at an unexpected boon, there are regular and continual updates on the Bergson family life.

These little scenes don’t have much impact on gameplay (unless they unlock a new character or mechanic, at least) but so many of them are heartfelt and touching, and they’re often related to your combat exploits. In the first area, you have a chance to rescue an orphaned wolf cub. Do so – and find the herbs required to heal it – and you’re greeted with a scene of the family welcoming the newest arrival. It’s… lovely, frankly. The actual plotting is a little muddled, but there’s so much heart in these scenes that it’s hard to mind.

Halls of the Mountain God 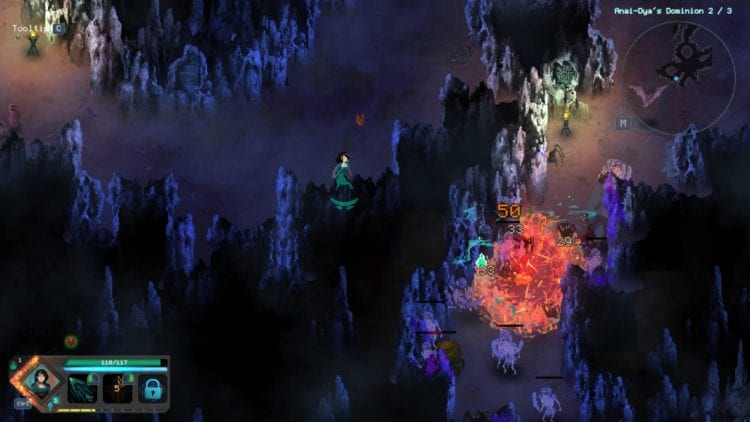 Linda’s Explosive Crescendo can hit anywhere on the screen, making it a useful means of dealing with foes around corners.

Strictly speaking, though, that’s all just context for your adventure. As I said, the meat of Children of Morta is in the dungeons. The Bergsons are trying to free three spirits from the Corruption and this means venturing forth into randomly-generated twisting paths, slaying enemies, battling bosses, and occasionally playing Pong.

The moment-to-moment gameplay will be familiar if you’ve played pretty much any recent twin-stick shooter. You run around, aim with the mouse, and have an Evade key to help you slip away from trouble. It’s all done competently; there are a few minor issues which we’ll get to, but it’s swift, responsive, and “feels” good – as nebulous as that statement is. It’s nothing particularly new or spectacular, but that’s not a bad thing.

Things pick up when it comes to the characters, though. You’ll eventually recruit six playable Bergsons, all of whom vary wildly in the execution of their executions. 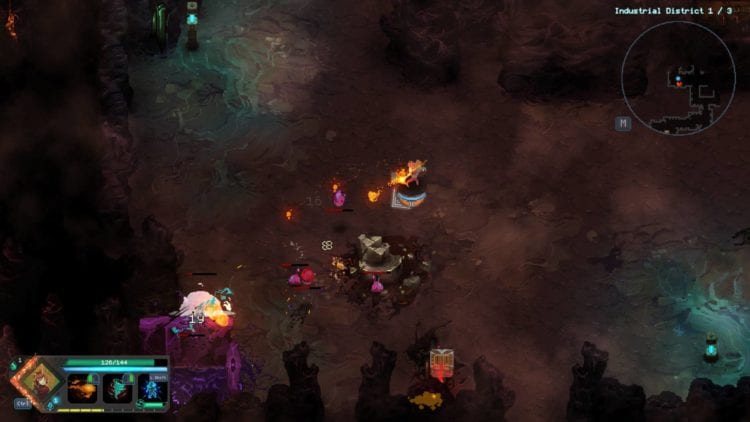 Lucy is weak, but if she can stand her ground then her damage output is monstrous.

Each of the Bergsons has three unique attacks and a unique “Rage” mode, which builds up over time. These are unlocked piecemeal as you play Children of Morta; leveling up drip-feeds you skill points for you to use in building your Bergson. Each mostly fits a class archetype: warrior, archer, mage, monk, and so on. But not necessarily in the way you might expect.

Let’s take Lucy as an example. Dangerously fragile and flinging fire from her hands, she’s the mage of the group. She’s also a Gatling gun. The longer she stays in place firing, the faster her attacks fly out and the greater chance of “sidewinders” – secondary balls of flame that whirl in the general direction of her target. Her “stamina” pool is mana, used for her secondary abilities: a decoy that attracts enemies away from her, and a cyclone that gathers them up in one place. Given the right talent tree upgrades, she can even become completely immune to a few hits no matter their strength. 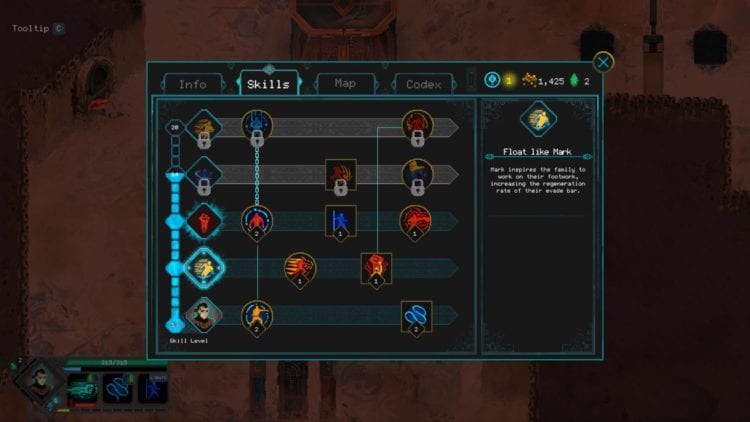 Every additional level in a skill requires more points, so you can spend one point to unlock a new ability or hoard them to upgrade previous ones.

Now let’s compare to Mark, the monk. Unlike every other melee character, his attacks lock on to opponents and let him dash towards them. His stamina bar starts at empty and fills as he punches things. That’s because his stamina bar isn’t stamina, per se, but armor: the more he attacks, the less damage he takes.

Children of Morta isn’t Diablo 2 and you’re not likely to see wildly different builds, but you can respec and you can hold onto points for strengthening earlier skills in lieu of getting new ones. Regardless: every Bergson plays completely differently. You’re actively encouraged to try out different ones, too, and not just because each is better suited to particular challenges. Hitting level thresholds grants bonuses to every Bergson, be it a bonus to armor or having Lucy summon a decoy should you evade at the last moment. 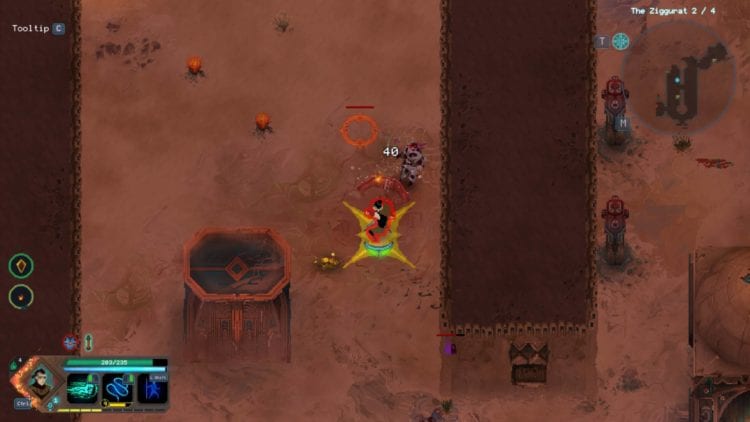 Considering the beautiful art I do wish the environments looked more varied, but the drabness fits with the spreading Corruption, I suppose.

Not everything in Children of Morta is done quite so well, unfortunately. There are niggling issues – the narrator, usually pretty good, sometimes can’t decide on his pronunciation of particular words. Flurries of cutscenes can happen in quick succession if a dungeon run goes well (or badly). Luck inevitably plays a part in your runs, and balance is occasionally wonky. And on at least one occasion a cutscene happened and the plot progressed, only for the plot to then… not have progressed. I think that one’s simply down to my beating a dungeon too quickly and causing one cutscene to play before expected, but still.

More importantly for a game like this, the hit detection is weird. At times, you expect environmental objects to shield you from projectiles, but the enemy blasts pass right through. At other times, you think a shot will hit you and it travels directly through your sprite’s head. This goes for your own ranged attacks, too. I’ve shot arrows they have traveled through the dungeon walls only to stop at an arbitrary point much farther along, and others be blocked from their target by a tiny pixel of cave.

Another sizeable problem — which I sincerely hope is soon patched — is that there’s only one save slot and no way to restart the game from scratch. I may simply be a blind idiot and I’m missing the option, but having now finished the game I’m baffled by the fact that I have to continue with my completed data and can’t start the adventure over. 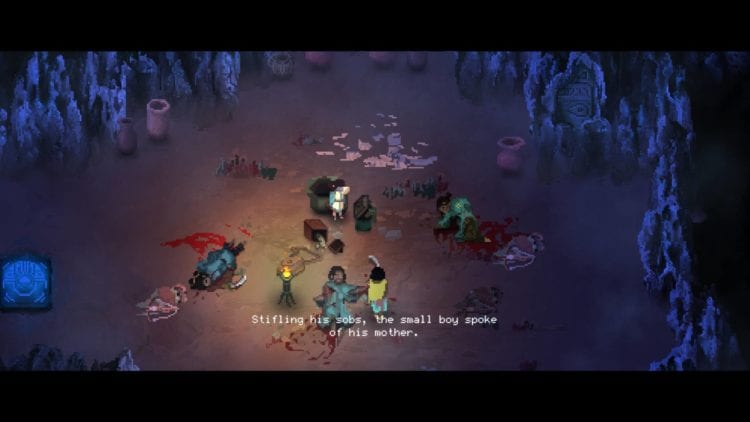 You can’t save everyone, and coming across lives ruined by the Corruption adds some emotional weight to Children of Morta.

For the most part, those are niggling issues. I didn’t encounter Death By Hit Detection much during the 12 hours it took me to finish Children of Morta, so it’s not something to be overly concerned about. The save thing is a bigger issue, but one I can’t imagine will be left standing. (Or again, I’m a blind idiot.)

Indeed, I have no hesitation in recommending this to any roguelite fans: it’s one of the best I’ve played in quite some time. Colossally different characters, breathtaking pixel art, and a surprising amount of heart help this solidly-built twin-stick roguelite stand out from the pack.

Children of Morta is a solidly built action roguelite, but it's the family struggles and heart within that elevate it above the crowd.

By Joshua Chu19 hours ago
Reviews