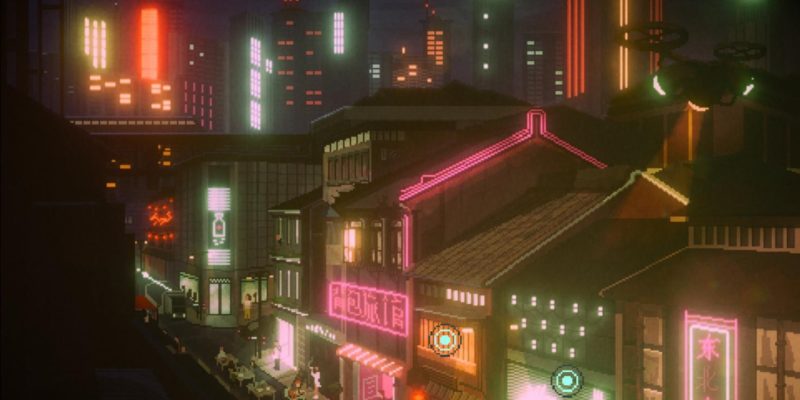 Chinatown Detective Agency is not, I think, a reaction to Cyberpunk 2077. I’ve seen a lot of supposition that the wave of cyberpunk games we’ve seen lately is an attempt to hitch up to the bandwagon of CD Projekt RED’s latest. But the truth is that cyberpunk has never really gone away. Shadowrun, Hard Reset, Deus Ex, Observer – even the venerable (and not on PC) Shin Megami Tensei series has a heavy cyberpunk bent in a number of games. It’s always been here.

On the flipside, Carmen Sandiego has been missing in action since the mid-90s. Some half-hearted attempts to bring her back, sure, but nothing has come close to Where in the World Is Carmen Sandiego. She’s not the name she once was. Sorry, Netflix.

Chinatown Detective Agency may just remedy this. It pilfers some mechanics in a way that’d make the carmine-clad thief proud, while updating things for a more adult audience; the sort of people who played Carmen Sandiego 25 years ago. People like me, and perhaps you.

When in time is Chinatown Detective Agency? 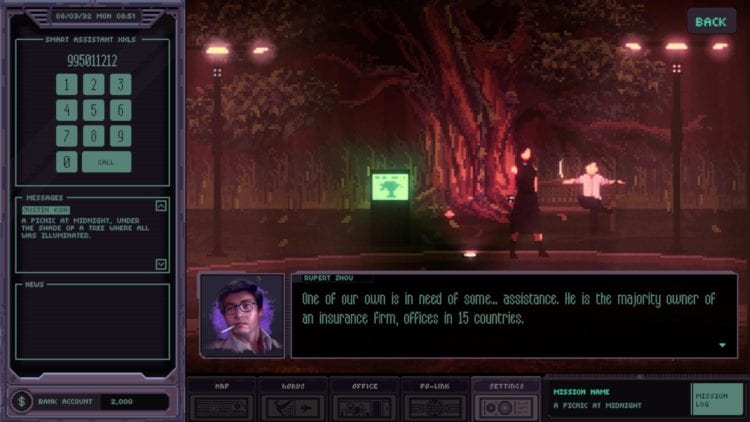 I’ll admit: I’m a sucker for anything which involves clandestine meetings with a smoking man, in a closed park.

Set in a neon-drenched Singapore roughly 12 years in the future, Chinatown Detective Agency puts you in control of Amira Darma. As the game opens, she’s just moved from working for the police to opening up her own detective agency. In Chinatown. You can probably see where the game’s name comes from.

Amira is quickly offered her first case – to track down an accountant who’s absconded with a large sum of money. But her client seems to be part of a very wealthy cabal, and there are hints that not everything is as it seems. Your investigations will lead you around the world, solving clues and cracking cases.

So far, that description probably sounds like a pixel-art adventure game, especially when you combine it with the gorgeous screenshots adorning this page. But there’s a fair bit of a Carmen Sandiego influence in here too.

Where in this game is the Carmen Sandiego influence? 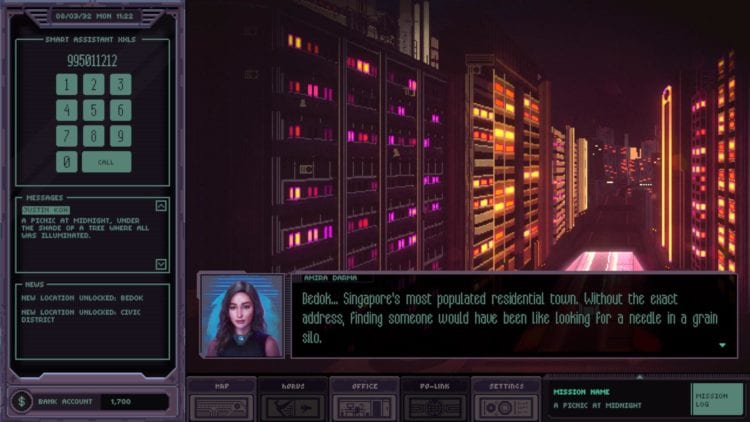 See? Education! While this may not be the best example, it’s one of the prettiest.

While the cases Amira goes on aren’t randomly generated and the overarching plot will presumably remain the same, there are similarities.

First – despite the neon, the noir, themes, and more radical elements like bombings and gunfights – this actually appears to be somewhat educational, without smacking you over the head with a blunt stick made of facts. On visiting Singapore’s Botanical Gardens to meet the client, Amira comments on their origins. Another clue points towards Londonium: the old Roman settlement where London now stands (which I reckon you could’ve guessed). Nothing ground-breaking, but nice little notes that might teach a thing or two.

Chinatown Detective Agency also tests your real-world knowledge, and outright suggests looking online for further info. The preview build offers up a quote, and then demands you search online to find out who said it to get your next lead. Of course, if you’re a smartypants you’ll know who said it, but that’s besides the point. It’s not quite Carmen Sandiego‘s testing of your knowledge (which may not work in the age of the internet) but regardless, I’ve always liked The Black Watchmen-style puzzles that require some internet searching.

Not everything’s cribbed from Carmen’s book, though. Aside from searching online for relevant info, you’ll be solving logic puzzles, from figuring out a book cipher to doing a simple memory-matching exercise. There’s even a spot of point-and-click gun fighting, which looks like it can play out in multiple ways, possibly changing coming events.

What in the world is coming next? 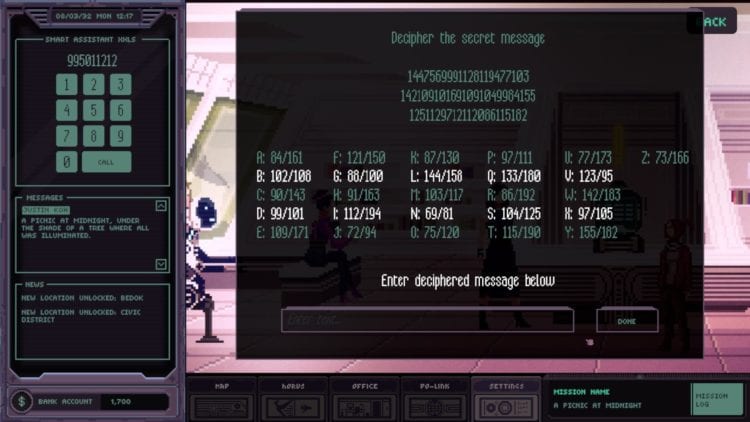 Not the most complex of puzzles, but this is a tutorial mission.

That said: what I’ve played is the demo mission, which you yourself should be able to hop into right now if you like. It’s deliberately simple, short, and tutorial-heavy. The full game promises more complex problems and situations, which I’m frankly eager to sink my teeth into. But there’s a lot I can only guess at.

There are a lot of systems in the demo that are visible but not currently impactful. Time is a finite resource, as in Carmen Sandiego. Hopping on the subway or taking a flight eats up valuable hours. Money looks like it’ll matter too, with informants and bills draining your cash. Considering the way this demo ends, I do wonder if there are ways to earn more or less depending on how “successful” you are with a case.

Intriguingly, you’ll also have the opportunity to build up your agency. In the future we’re promised the ability to expand the office, assemble a team, and effectively run a… well, a Chinatown Detective Agency. It appears you’ll need to manage health and potentially other stats, too. I’m genuinely curious to see how all of this will shake out and impact the core gameplay.

How on earth is this, right now? 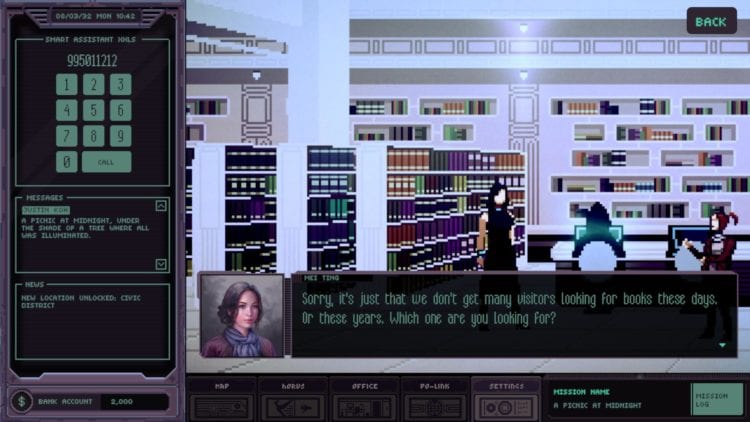 While it might look like a point-and-click adventure, I’ve seen no indication of inventory puzzles or anything of the sort in Chinatown Detective Agency. Just investigation – in-game and online – and logic puzzles.

I’ve got a lot of uncertainty about where a lot of this will actually go and how it will impact things. I don’t know how your expanding agency will impact the gameplay, nor do I know what the penalties for failure will be. Will you get paid less, or have to restart the case? Will there be a point of outright failure if you don’t earn enough or should you spend frivolously? I’m not sure. But I do love a lot of the little ideas, like choosing between a return flight with a definite date and time or a one-way ticket. It’s a minor thing, but I can already see my brain balancing cheaper flights with the chance I’ll need to spend more or less time in my destination than I’d guess.

As a proof-of-concept, what I’ve played of Chinatown Detective Agency is really rather good. Here’s hoping that the full version expands on these concepts and succeeds in making me feels like a noir detective. A cyberpunk noir detective.

Chinatown Detective Agency is on Kickstarter now. If you want to check out the preview build for yourself, it should be available on the Kickstarter page.

By Logan Broadley10 hours ago
Previews