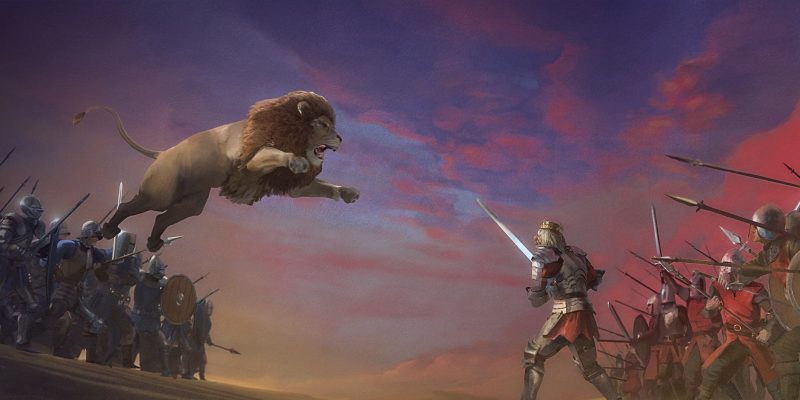 The first time you play Chivalry 2 you’ll be put straight into the game’s tutorial. It’s fairly straightforward, showing you how to swing your sword, perform counters, and ripostes. Eventually, you get to try out your moves on an computer-controlled character. During this practice fight, I decapitated the poor schmuck. Then I noticed his head rolling around on the ground — and that I could actually pick it up. I did so and chucked it at the next NPC I was supposed to train against before cutting them down too. That short interaction set the tone of Chivalry 2 for me, and was a good introduction to its beta.

I have a decent amount of experience with medieval combat games, having played a good portion of both Mordhau and the original Chivalry. In my first few moments with it, the sequel clearly demonstrated that it wanted to carve its own space out in this niche genre. Yes, it has some similarities with the other medieval combat games I’ve played, but that’s unavoidable. Those similarities are the necessary ones, like how Call of Duty and Battlefield games are similar in that guns play a large role in both. Chivalry 2’s differences set it apart though. Those discrepancies should open it up to a whole swathe of players who are turned off by the more realistic — and, in some cases, competitive — aspects of other medieval combat games.

Go medieval on them

At its core, Chivalry 2 is still a medieval combat game. Fighting off any other player requires you to approach bouts with some thought and not just go in swinging their giant maul. However, once you get a grip on all the options you have in combat, fighting other players almost becomes a puzzle, with the solution being knocking your opponent’s block off. You get to that result with a combination of swipes, slashes, and stabs. However, in between each attack, you’ll likely have to defend, and this is where Chivalry 2 begins to set itself apart.

Combat in Chivalry 2 isn’t nearly as prohibitive as that in Mordhau for instance. It’s much more forgiving and straightforward. Counterattacks, for example, are easy to perform, just requiring some quick reaction times. To counter an enemy’s attack, you have to perform the same kind of attack as them from a block. Doing so makes you impervious to all attacks of that type for a moment, letting you swing away with a little more courage. Of course, if you’re countering a slash and someone else comes in with an overhead attack, you’re in some trouble. Battles in Chivalry 2 are still winner takes all.

What you can do though is attack that second enemy with your counter as well. Chivalry 2 continues to use a control system where your movement buttons control your character’s legs, and the mouse their hips. In simpler terms, you can drag your attacks, hitting multiple enemies as you swing your weapon. This isn’t a new system to medieval combat titles, but it’s implemented well here. On multiple occasions, I was faced with several enemies but kept them at by swinging my weapon wide, letting the hitbox do its work. This system still takes some getting used to, but once you’ve got it down, combat in Chivalry 2 opens itself up.

In all, there’s some learning that goes into playing Chivalry 2. You need to figure out the game’s combat mechanics and use them creatively to give yourself an edge in battle. However, these systems aren’t so complex that they should turn you away. If anything, they’re simple and fun to learn. If you choose to figure Chivalry 2 out, the results are spectacular. You become a medieval meat grinder, pummeling enemies to death with a massive maul or disarming (literally) them with a single swing of your sword.

Have fun with it

I feel like I’ve made Chivalry 2 sound serious, but trust me when I say it’s not. Sure, the game modes are objective-based and maps are gorgeous, detailed castles and battlefields, but these depictions betray the goofier side of the game.

Where Mordhau had its lute players and peasant builds, Chivalry 2 has environmental options and roleplaying. You’ll be charging into a line of enemies to push a siege tower and look to your left only to see a member of your team hauling a massive bell to chuck at an enemy. Chivalry 2 is much more arcadey than your average medieval combat game — it doesn’t take itself too seriously.

Use whatever you can as a weapon.

In combat, for instance, you can disrespect your enemies with a yo’ momma joke. Around the game’s massive, detailed maps you can find random, unconventional weapons lying around. You can chuck giant rocks at enemies, or even poultry that you find running around. If you come across a well, reach in and you’ll be armed with a fish that you can chuck at your foes. And trust me, there’s nothing better than killing a man with seafood.

Looking around to see these unconventional fighting methods, or better yet employing them yourself, are great reminders that you’re still playing a game. They take away some of the seriousness that medieval combat games tend to wrap themselves up in. In a way, this approach is refreshing. The game is still immersive, and you can always get lost in its moment-to-moment combat. But if you want to play outside of the norm, that option is totally open to you. Chivalry 2 is a game, not a sim, and it’s proud of that fact.

A castle worth besieging

Even though the experience offered in Chivalry 2’s beta is quite limited, every moment I’ve experienced in it has been thoroughly impressive. Developer Torn Banner Studios has outdone itself, delivering a game that has already set itself apart from other games in its unique genre. With its simplified combat and tendencies towards fun before realism, Chivalry 2 feels easy to recommend to someone just dipping their toes into the medieval combat genre.

I can easily say that I’ll be picking up Chivalry 2 when it eventually releases. The scant amount of content I’ve experienced so far has left me wanting more. I’m excited to see how far Torn Banner pushes this title, which has the potential to be one of my most-played multiplayer games this year.