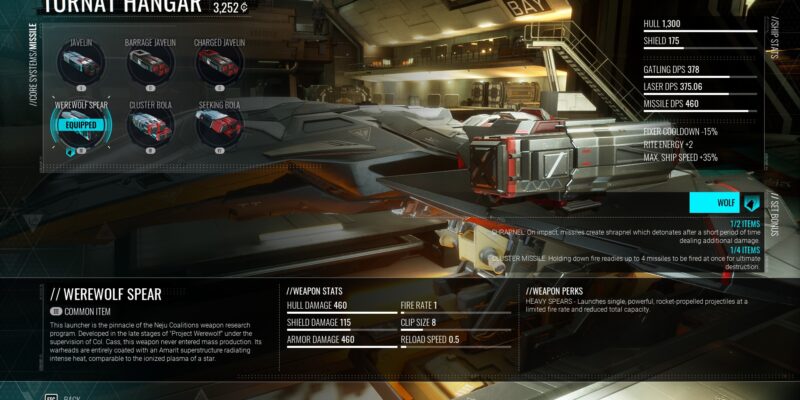 The dream of owning a space fighter is close to the dream of owning a car: unrealistic and unaffordable. However, let’s focus on two aspects of the dream: fighting and being able to outfit the ship to fight better. Here’s an overview of the guns and their modifications in Chorus.

A lot of other space fighter games would have you hop from ship to ship, unlocking new spots and new capabilities. That isn’t the case in Chorus, where the Forsaken doesn’t change much, save for getting upgrades for Nara’s power. You start being able to carry three weapons, a Gatling, a laser, and a missile pod, and you finish with those three weapons. Now, off to the guide!

Hangars are essentially the stores of the game. They have two unique functions: to sell you guns and modifications, and to sell you HP and shield upgrades. Yes, I split this into two things to make hangars feel better about themselves.

Hangars are, notably, entirely unnecessary if you want to swap your kit. You can literally do it on the fly. 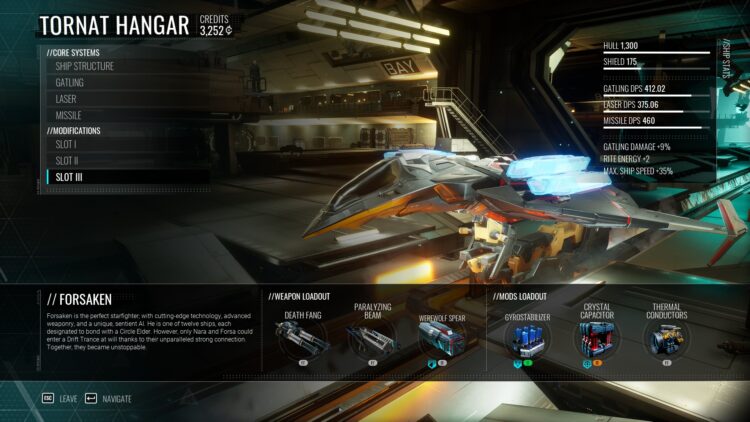 This is your workhorse, somehow made of both meat and potatoes, as well as bread and butter. The Gatling is best against HP, and less-than-great against shields and armor. The range might be short, but Rite of the Hunt takes care of that issue more often than not. Brrrt the pain away! 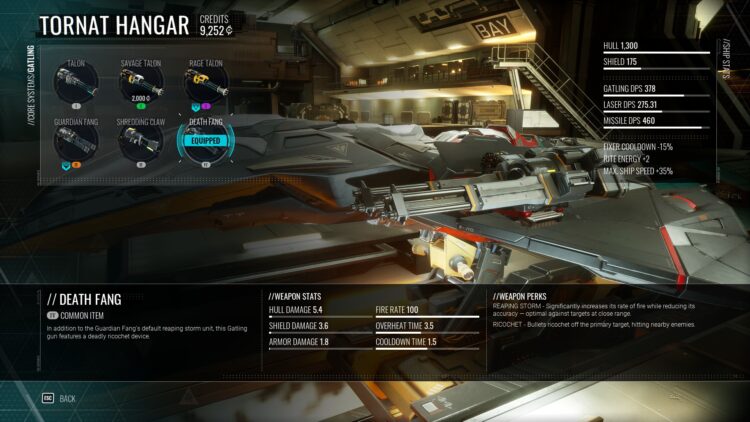 Things to consider: More ROF is always better. That’s why the only Gatling not worth using is the one that uses burst fire. You might as well be using a laser.

Tactics: Ignore any fluff text about accuracy, this isn’t a scalpel. As long as your close (thanks, Rite of the Hunt), you’re accurate enough.

The laser is for shield-popping and precision work — so essentially, just for shield popping. Unlike the Gatlings, which overheat (rarely), lasers deplete their charge (rapidly) and have slow ROF.

Things to consider: I never really felt the difference between the lasers I used, so the newest one will probably always be better.

Missiles are there to kill slow armored targets, and maybe stationary turrets. Technically, you can hit moving targets like Crows with them. Practically, you can do the same without meticulous aiming or accounting for flight times with the Gatlings.

Things to consider: With the exception of the Werewolf, newer missiles are better missiles. Bolas and Seeking Bolas are the best. They do a sort of splash-shrapnel damage, which is great when fighting against stationary targets like radiators, as well as cheesing some of the renewal seal challengers via AOE damage. Werewolf is weird, as it needs the four Werewolf items to really shine, the launcher and the modifications that empower missiles, and is mostly an aesthetic choice otherwise, as it’s a slow-firing, powerful launcher compared to the usual MLRS approach.

Anything that’s not a gun is a modification. I split them into roughly into three categories:

Some guns and modifications will have tags like “Guardian” and such. They don’t do anything by themselves. However, each set gets two bonuses: one is activated if you have two items out of four, the other comes online if you have all four.

I never bothered, as having my preferred combo of items for a task at hand was more important than the paltry benefits sets bring. The Werewolf set is the worst, as it only benefits the least useful version (Werewolf) of a not-very-useful weapon (missiles). 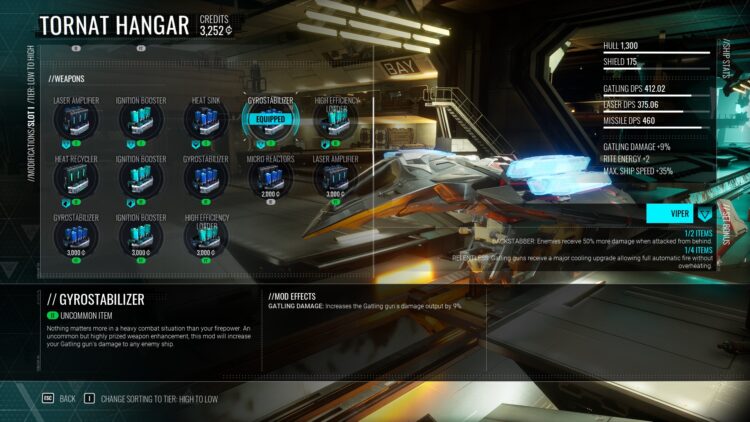 Remember, you can change your kit on the fly. This means that there’s no shame to completely swap out your kit if you feel like a mission is beating your ass. Once it’s done, you can swap the stuff back out and be on your merry way.

Chorus guide: The enemies you’ll fight and how to beat them