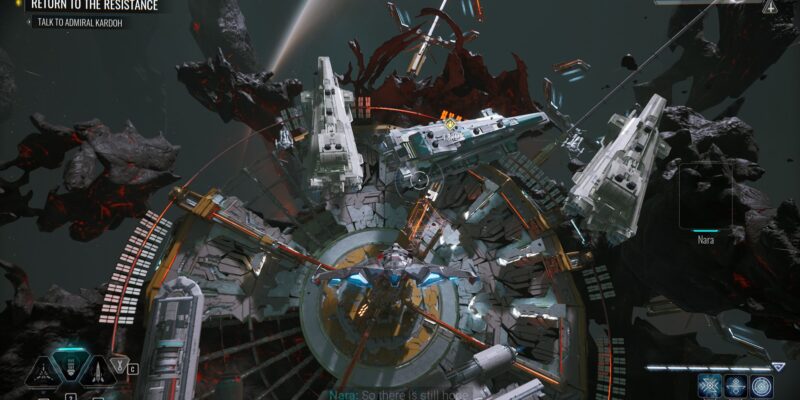 Enemies justify the “fighter” part of the “space fighter” game genre, so it’s extremely logical that there would be quite a few of those in Chorus as well. Here’s a brief rundown of what you’ll face — and how to face them.

Now, the split of enemies in the game is between human ones and the Faceless, creatures that the Circle worships. About 90% of who you fight will fall into the former category, but the Faceless will make their mark by having the single most annoying unit in the game. Good thing you’re playing Magical Space Girl Lilya Litvyak, then!

The basic run of the mill enemy fighter that comes in the Circle and Pirate variety. They’re only ever dangerous if there’s too many of them to dodge, but if things have gotten to that point somehow, you can only blame yourself. 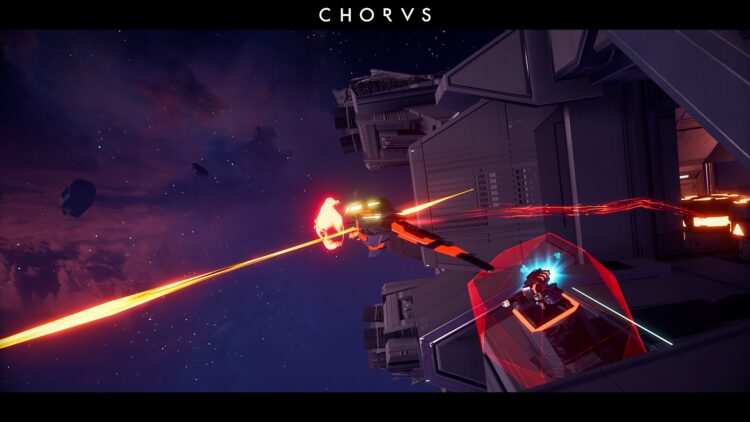 The fighter+ that also comes in Circle and Pirate versions. It’s main advantage over the Crow is the shield, which is only there to justify the existence of the laser gun. Later on, the Circle will roll our more powerful varieties, though they are rare. 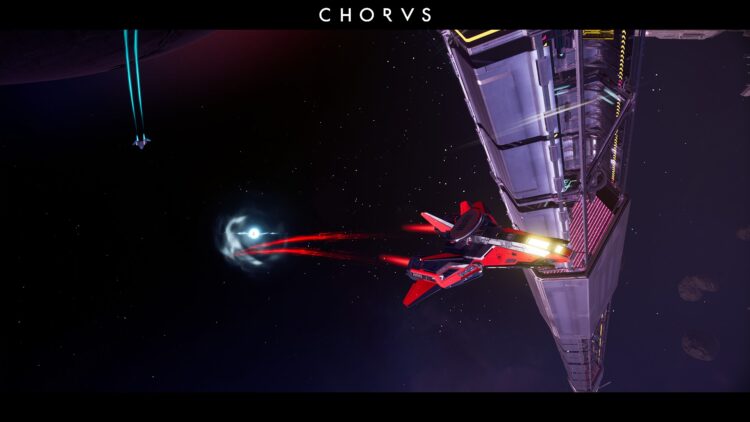 Tactic 1: Switch to the laser, teleport behind them, blast them twice, and finish with the Gatling. If you’re feeling cocky, the laser can finish them off, but the Gatling doesn’t require you to aim that much, or care about charges.

Tactic 2: The advanced varieties can be annoying, sporting charge lasers and, for the elites, not appearing on sensors. Luckily for you, by then you have access to Rite of the Storm. Whack them with it, do a 180 drift and Gatling them to death as they tumble along.

Vultures make up the big chungus of the small craft world and are the reason why missiles exist. They come in several annoying varieties, such as mine layers and charge laser bearers. All of them have armor instead of health. All of them can become a pain by stopping, getting possibly invulnerable directional shields, and then shooting at you. 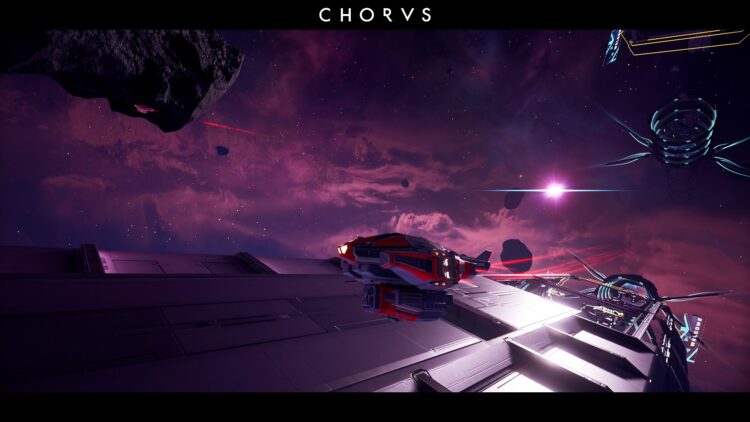 Technically an enemy capital ship, Shades are just there to make you feel good about your drift capabilities. The biggest danger comes from their ability to endlessly spawn Crows.

Tactic: Fly up from below and either drift, or just strafe the exposed radiators.

No free lunch here like it was with Shades. These have turrets and components that need to be taken out before you can access the inside, take out more components, and then destroy the core. 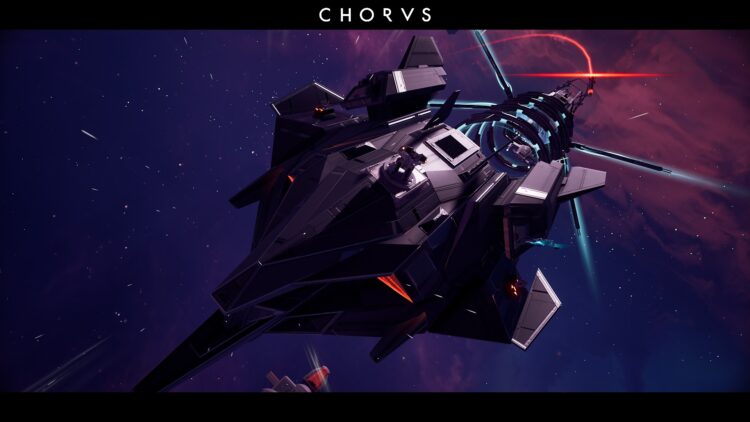 Tactic 1: Use Rite of Senses to highlight all the interactive (read: shootable) pieces. Prioritize engines and radiators over turrets, some of which may even be shielded.

Tactic 2: It will probably take you two passes to destroy all the internal components before the core shield drops. Just drift 180 as you fly out of the ship and fly back in.

Tactic 3: Destroying the core sends the ship into an explosive meltdown. Get the hell out of there and fly until there’s no red shading on the Forsaken. That will indicate that you’ve left the explosive radius.

Picture the Crows reimagined by modern art, but with shields and a charge attack. 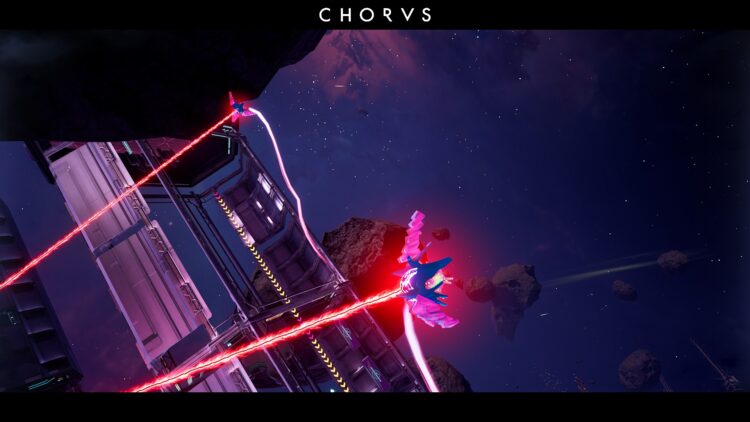 Tactic 1: They essentially have one HP, so if you drop shields, the next Gatling round will finish them.

Tactic 2: Rite of the Storm them head on, and shoot them once.

Tactic 1: unlike Vultures, they don’t get invulnerable shields, so chase them, zip past mines, drop shields and explode them.

Tactic 2: They empower Emergents with shields or something. I didn’t notice any real difference, but it exists, I guess.

The worst enemy in the game outside of bosses, with charge attacks AND the ability to attach to your plane and kill it.

Tactic 1: If the blister weak spot is visible, dump Gatling.

Tactic 2: If you’re facing the boss version with four pillars, don’t bother shooting, just use Rite of Star on it as much as you can until it’s dead.

Turrets live on the hulls of capitals and stations. Since they’re immobile, they’re an easy target, even for missiles.

Tactic 1: Most can be brrrt’d with the Gatling easily.

Tactic 2: If you’re feeling fancy, or have the Werewolf missiles, use missiles on them as they can’t dodge.

Tactic 3: Prioritize taking down charge laser ones above all others. 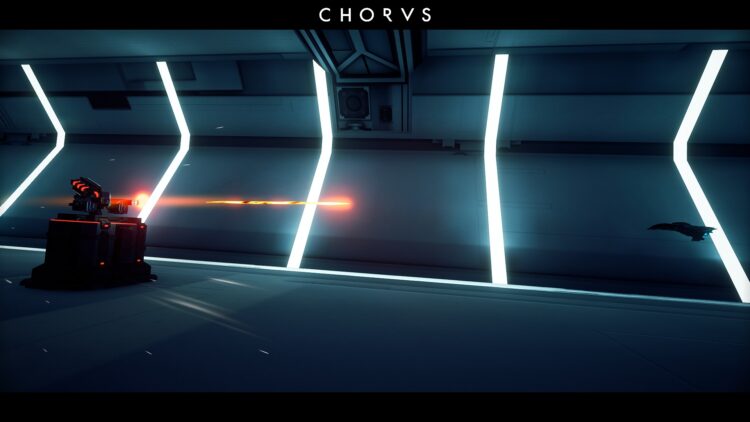 Technically not an enemy, but hangars make your life difficult by endlessly spawning Crows. Yes, I am also enamored with the fact that game developers only ever inflict non-endless hangars when it’s not the player who benefits from them.

Tactic: Each hangar has two extremely conspicuous fuel tanks/energy batteries. If you’re close, some Gatling fire will take care of them. If you’re far off, unleash missiles and forget about it. What is it gonna do, dodge?