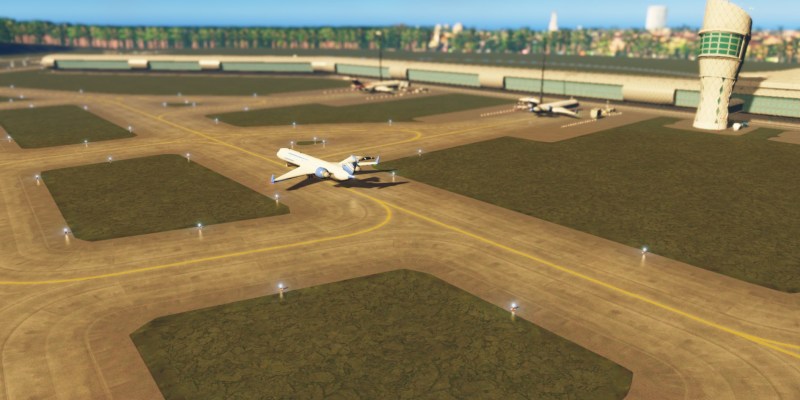 Air transport is nothing truly new to the Cities experience. But, now several years since the city building simulator launched, Colossal Order has decided to revisit this major transportation system to give it a full-on revamp with the Cities: Skylines – Airports expansion.

With Airports, virtual city planners can now fully integrate the system into their city’s overall transportation network with a deeper level of flexibility and customization. This is similar to how last year’s Sunset Harbor expansion amplified the depth and complexity of many of the sim’s core transportation systems. But, the question is: does this more complex experience justify the added time and effort?

Naturally, those who are interested in picking up this expansion must have already had a deep desire for aviation, thus moving them to want to flesh out the way airports worked in Cities. That’s because you really have to put in the effort to get these more advanced playsets to be truly fleshed in terms of not just profitability, but also functionality. Here’s the breakdown.

From the sky to soil

First off, instead of just plopping an airport down like before, with Cities: Skylines – Airports you now have to create a special district; so far, the first and only of its kind for a form of transportation. Creating this district will also terraform the surrounding area, resulting in it flattened and vegetation getting removed. Depending on the topography of your map, this can either be a minor inconvenience or a tedious process right from the jump, so be sure to keep that in mind. During this first phase of building, soil is collected and accounted for by means of a bar.

You can buy and/or dump soil in chunks depending on what you need to complete building the district. Since district building is an essential part of the process, finding a suitable spot on your map doesn’t just depend on its topography, but also how well it fits with the rest of your city. 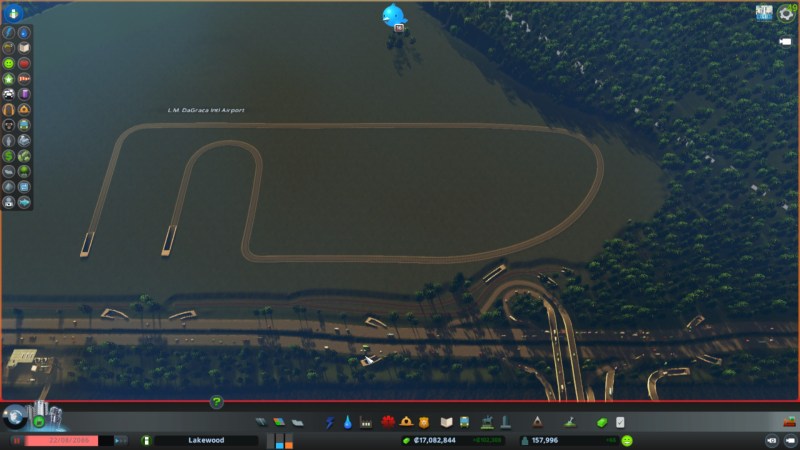 The new complex airports require their own districts, which means you’ll need a good chunk of space.

Many major airports in the real world are built away from a city’s heart, but features direct connections to population hubs. The same rule of thumb should be applied to your virtual airport planning as much as possible. So, just from these initial phases alone, you can see that a lot really goes into this new building process: finding suitable land, terraforming/landscaping it, and then connecting it to major transportation lines. Getting these key elements correct will make or break your airport’s level of efficiency. They’re expensive to build and maintain, so turning a profit is, of course, very necessary.

Once the groundwork is laid, then comes time to actually put together the airport itself. This includes building a terminal and concourse, placing airplane stands (parking gates), and then assembling the surprisingly complicated network that is the runway and taxiway system. I quickly realized that accounting for all of these different cogs in the machine is way more of a process than I initially thought.

Seeing that space will more often than not be limited, you have to really think in your head what kind of airport you’re considering to build; not just right there in the moment, but in the future. Do you anticipate it turning into a major hub, or would you rather keep it more along modest side of things? Having this idea before you start placing concourse tiles and taxiways will ultimately help you to make better sense of your airport’s layout before it even begins. While you can rip up objects that you place if necessary, that does come at a cost. And, trying to reconfigure the remaining tiles to be compatible with the adjusted layout isn’t exactly what I would call straightforward. This primarily has to do with how the runway/taxiway system works, as alluded to earlier.

Here in Cities: Skylines, runways and taxiways are treated as entirely one-way thoroughfares. You need to create your airport’s ground network to basically function like one big, flowing circuit. Unlike in real life where taxiways and aprons run in all different directions, Cities has its layout to be strictly one way when it comes to aircraft movement.

This balancing act becomes even more crucial when connecting taxiways to the parking gates. I quickly learned that you always need to leave room to the left or right to allow the taxiway to loop back in the opposite direction and link up with a stretch that will allow the plane to taxi back to the runway for departure. Honestly, I feel confused even typing this, so it’s better to just show you how I ended up laying my airport out. 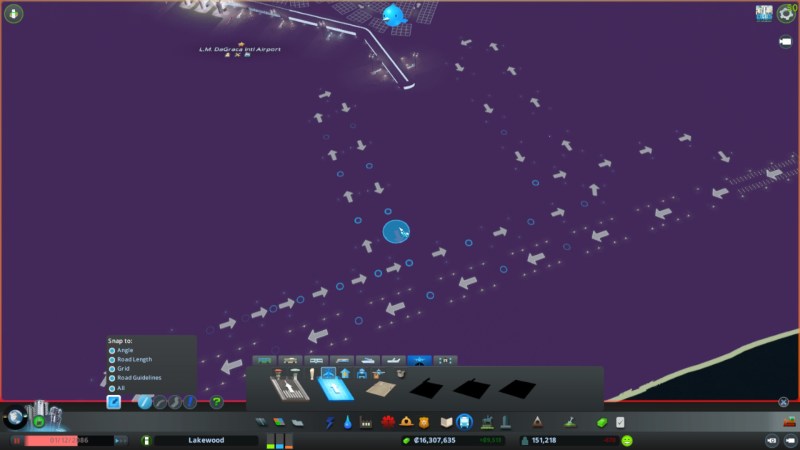 As you can see by the arrows, there are “loops” everywhere, all to compensate for the forced one-way movement. If you don’t do this, then the aircraft that land at the airport will simply disappear as soon as they park at your gates, resulting in no passengers deplaning or being boarded.

Considering how essential having such a layout is, it’s extremely perplexing that there’s no feedback whatsoever from the sim that tells you your taxiway circuit is essentially incomplete. I only figured out it wasn’t working when I carefully observed the aforementioned disappearing aircraft phenomenon. I just so happened to have (essentially, accidentally) created the correct looping circuit for just one of my gates. Once I saw that, I made the corrections to the remaining gates. Thus, again, it is important to map out your airport’s layout as best you can beforehand.

I also found this to be pretty much necessary for when compensating for even minor expansions. You start with only being able to host small passenger aircraft, but as your airport levels up, you’ll gradually unlock the ability to house larger jumbo jets, which call for larger parking stands. 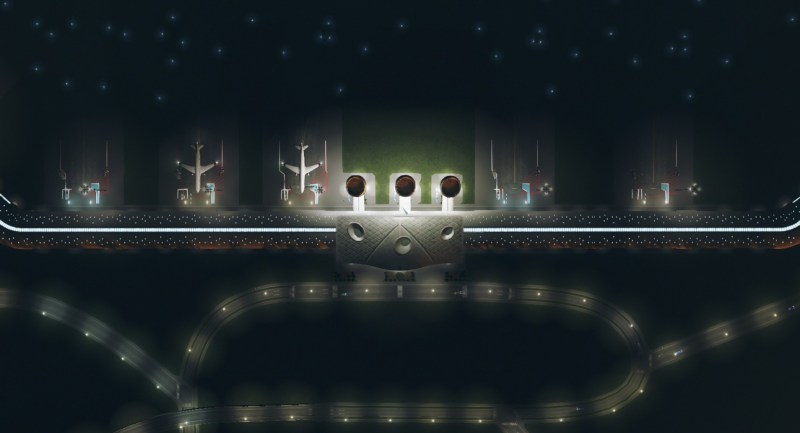 Having a good idea of your airport’s shape and size before building will certainly help the planning process.

The thing is, depending on your layout, adding a new chunk of the concourse and the subsequent gates may not necessarily be easy, especially when it comes to retooling the taxiway and how they connect to said gates. Considering that each airport will level up individually, you can’t build a small airport and then a separate larger one. So keep this in mind as your airport grows and demand increases.

Up, up and away… if you dare

Considering all of the moving parts that are involved in this new expansion (literally), it’s certainly not for those who want to just drop an airport in for the sake of having one. While the classic sets are still there for that more plug-and-play approach, these more complex options are definitely targeting the folks who want to put their engineering caps on and tackle yet another hands-on project to really help flesh out their city.

I barely even touched on the even larger layer that involves growing your airport to handling cargo operations in addition to passenger movement. This involves some serious route planning in order to properly plot out an efficient network that allows a continuous flow of ground-based traffic to and from the airport. In the essence of time, I didn’t explore this aspect of the expansion, but just trying to get my airport properly hooked up to my city’s road network on a basic level was enough to cause me to break a sweat. This expansion is certainly worth it for those looking for a building challenge.

Indeed, this expansion is not to be taken lightly; if it’s a challenge you want, it’s a challenge you’ll get. With that being the case, it definitely accomplishes its primary goal of providing dozens upon dozens of more hours to the gameplay experience. Considering Cities: Skylines advanced age, seasoned players in particular should definitely enjoy having something fresh to sink their teeth into.

By Dani Maddox5 days ago
Previews