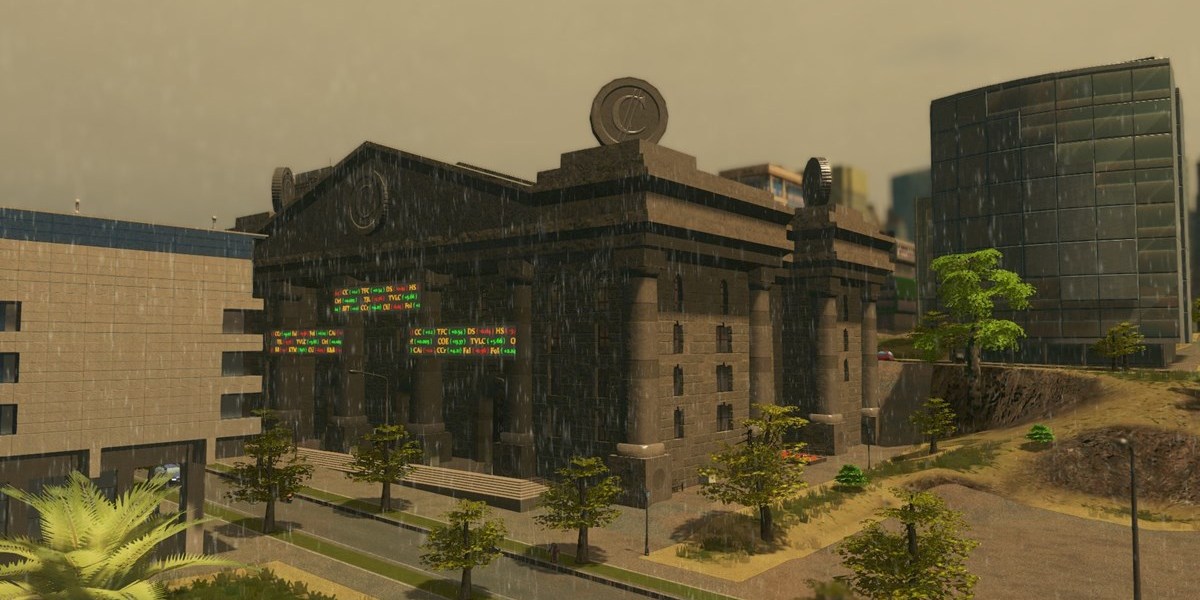 As if Cities: Skylines didn’t already have a healthy variety of different avenues for profit generation, the new Financial Districts DLC expansion adds yet another cog into the machine for you to manage. With this new expansion, players are tasks with learning the ins-and-outs of the stock exchange as an investor.

“Buy low, sell high,” as they say. But, just how difficult is it to really jump into the “Wall Street” of Cities: Skylines?

Allow me to say that I’m really the last person you should be asking anything about finances; I’ll recount the cash in my wallet about two or three times to make sure I did it right. Thus, approaching the feature set of this expansion was a bit daunting to me. Yet, after some tinkering around for a bit, it didn’t take very long to understand the basic concepts.

Once your building is placed, it unlocks a new section of the Economy menu: the Investments tab. The health of your investments are linked to the overall financial health of your entire city. So, a well-functioning city with a variety of different revenue streams will grant you the ability to play with a healthier set of stocks. There are a variety of pre-determined companies that will be selling shares, such as a gas company, airline company, healthcare service company, and more. Before you invest, you can view the current value of a single share, as well as its current change rate. Just like the real-life stock market, there’s a continuous flux in prices; sometimes there are steady rises, and other times there are very steep declines. Thus, the strategy is to buy enough shares to turn a profit, but not sink yourself in the process.

It goes without saying then that you’ll already need a healthy amount of money in your city’s treasury in order to properly finance your new investments. While you can get away with a few hundred thousand dollars to get you started off, at least $1 million or more will give you a much wider safety net. You can buy as little as one share, or several hundred; the choice is up to you. Whatever you choose to invest, the endgame is not to put in your entire fund. It’s also to keep consistent track of the Investment menu, so you know when’s a good time to buy, sell, or leave your shares alone. When you sell shares in a company that’s doing well, which is what will allow you to gain, then that will bump up the value of a single share. So, if you choose to reinvest in that same company, you’ll usually end up paying a higher price than how much your last set of shares cost.

For myself, going through the motions of buying, selling and holding became an interesting new game within of itself. Which, I have to imagine, is the crux of Financial Districts in the first place.

Having a thriving, healthy, virtual settlement has always been the backbone of Cities: Skylines. So, with Financial Districts, your actions feel more deliberate than ever. Some companies aren’t even open for purchasing shares unless you have the proper infrastructure. For example, there’s a forestry company that requires you to have a functioning forestry industry of a certain size before you can invest. Thus, your actions within the expansion of your city have a more direct impact on the financial world in which it’s participating.

Seeing that this is a bit of a strategy-oriented sim at the end of the day, the Financial Districts expansion for Cities: Skylines makes it so that those who want to have an even more dynamic financial journey can now dig a little deeper into ensuring their city is thriving as much as possible. 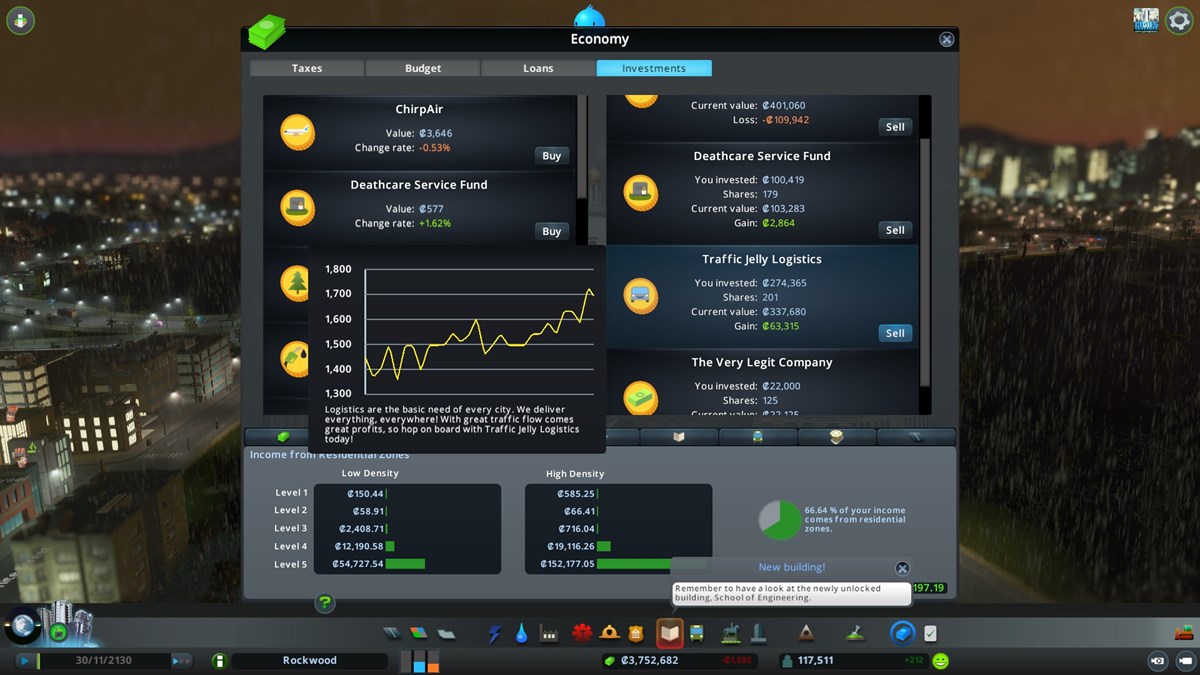 Building out the proper networks to ensure that commerce and community remain in a consistent state of flow is now better reflected by the health of your stock exchange. As you continue to buy and sell, eventually the city’s Stock Exchange building will level up, granting you access to other new buildings like a bank with armored transport vehicles, and an upgrade to a larger complex for the Stock Exchange itself.

By the third and final level, you’ll have access to a greater number of stock opportunities. In other words, your city’s financial opportunities will grow with you as long as you play the right numbers.

Despite the fact that I’m not the biggest fan of numbers (hence is why I write), I was surprised to be even amused by this expansion. Cities: Skylines is already engaging within of itself, so having yet another facet of responsibility to consistently check into was intimidating at first. But as I said in the onset of this piece, tinkering around with it enough eventually led to me learning the basics of its operations.

There are some official tutorials to further help maximize your potential with this expansion, but it mostly boils down to exactly how you manage your burgeoning city in the first place. 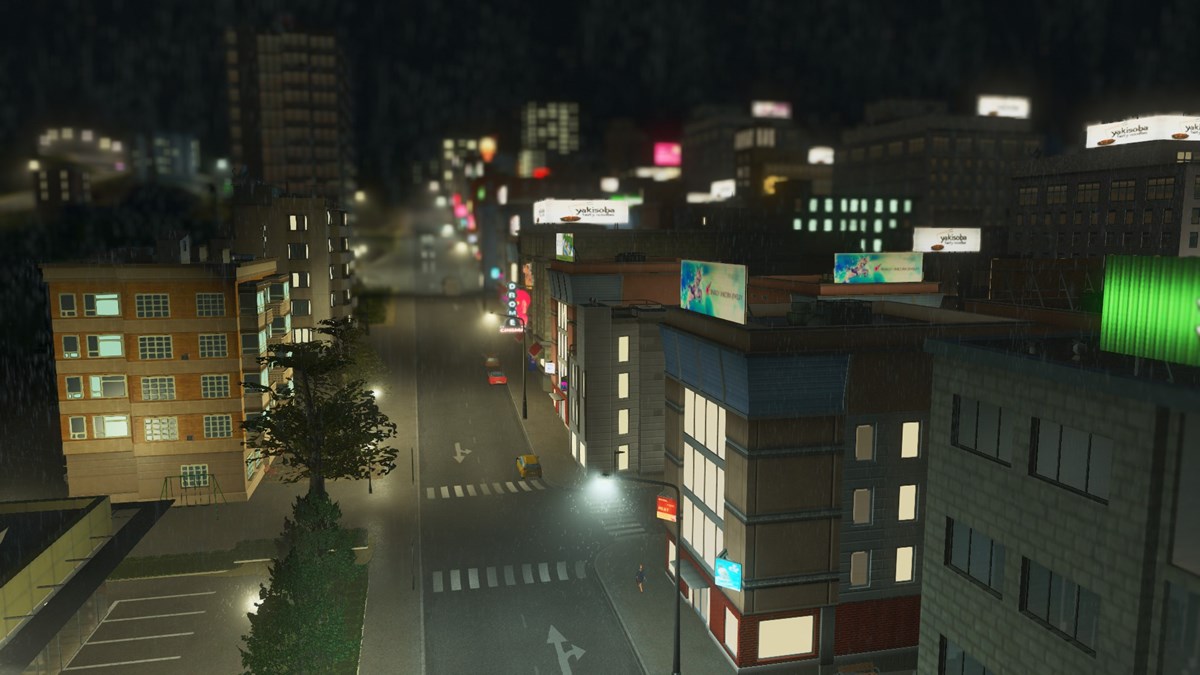 In my case, I used a starter map from the Steam Workshop that already had a healthy population and large treasury, so I did take the “easy way out,” admittedly. But, it still requires consistent management on your part to ensure your city and stocks remain healthy, regardless of whether or not it’s a city brought up by your own hands or a prebuilt one of which you’ve been handed the reigns.

This is a relatively simple addition, all things considered; it doesn’t alter the flow of the city or add much in terms of even visual variety in the way that other expansions like Sunset Harbor and Plazas & Promenades. But, for the number buffs out there, or for those who want an extra challenge, the Financial Districts expansion for Cities: Skylines has its charm.