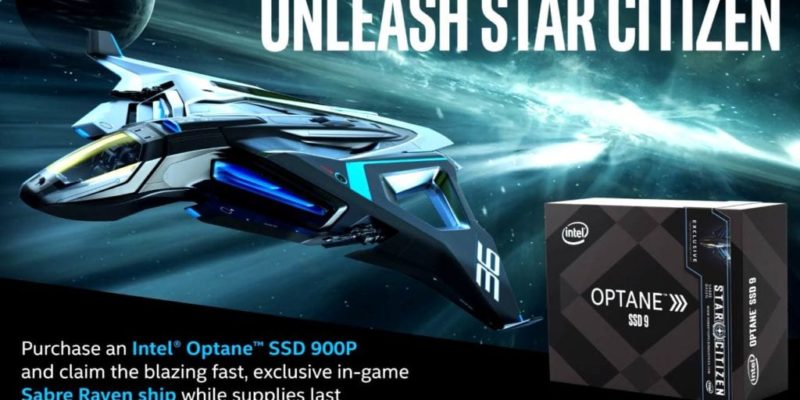 Star Citizen’s annual Star Citizen CitizenCon event is now underway in Frankfurt the live stream is now active. However, note that today’s schedule has been pushed back by one hour due to how long it took folk to enter the venue.

A few weeks ago Intel’s release pipeline was leaked and it included a reveal at CitizenCon for their Intel Optane SSDs. Today the event kicked off with Intel taking the stage to reveal the Intel Optane SSD 900P. This tie-in with CIG means that anyone who picks up and Intel Optane 900P will also be given a new ship, the Sabre Raven.

The Optane tech is non-volatile SSD with high speeds and has 20 times endurance over a normal SSD. Intel expects to see this tech used more in game development and it’s what CIG has been developing on. Roberts says that 3.0 is “enabled” for Optane.

The trailer for the new ship can be seen in the video below at around 40 minutes in. The video below is also the introduction to today’s event.

According to Roberts, who was also on the stage for this part of the show, he explained that this new version of the Sabre is a prototype based odd the original with heavy modifications which makes it their fastest dedicated dogfighter. It comes with twin EMPs and a couple of heavy duty laser cannons. It will be exclusively sold with the new Intel 900Ps.

The ship will be payable in 3.0 when it eventually releases. Intel has obviously identified that Star Citizen fans like to throw money at this incomplete game which makes them an easy target for new high-end hardware that you probably don’t need.

CitizenCon runs throughout the day and the following highlights can be watched. Note that everything is now running one hour behind.