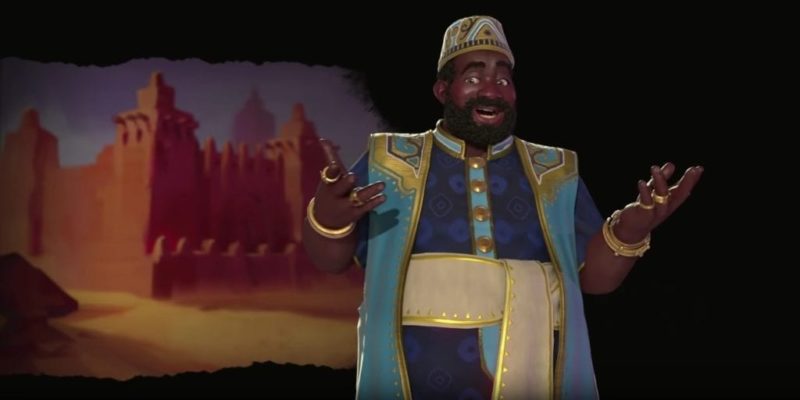 For those unfamiliar with Philippine television, there was a gag show called “Wow Mali.” The title translates to “Wow, what a mistake” or “Wow, what a blooper” given that it’s a hidden camera show with slapstick comedy. You can see a clip of it below. But what does this have to do with Civilization VI: Gathering Storm? Well, that’s because we’re taking a look at Mali, a long-forgotten civilization that once ruled western and central Africa. The desert empire was vibrant owing to its dynamic traditions and coffers filled with gold. Its ruler, Mansa Musa, was once the richest man in the world.

In Civilization VI: Gathering Storm, Mali’s quirks all have synergy when it comes to gold and faith generation. I considered Mali an “A-Tier Civ” in our previous tier list since Mansa Musa’s unique traits are sure to make you go “Wow! Mali is a great civ!” However, just like the Filipino show “Wow Mali” you could end up committing mistakes or bloopers along the way.

All of these uniques will have you swimming in gold if you play your cards right, but it will be challenging. Mali has one of the slowest and trickiest starts in the game due to their desert start bias and the need to settle on these inhospitable locations. Thanks to Songs of the Jeli, you can still gradually grow your cities, albeit not as optimal as having farms on grasslands or flood plains around you. Another downside is that production from mines has a malus. Instead of the usual strategy of spending turns training units, you’re more than likely to buy them.

For this playthrough, I chose the following settings: 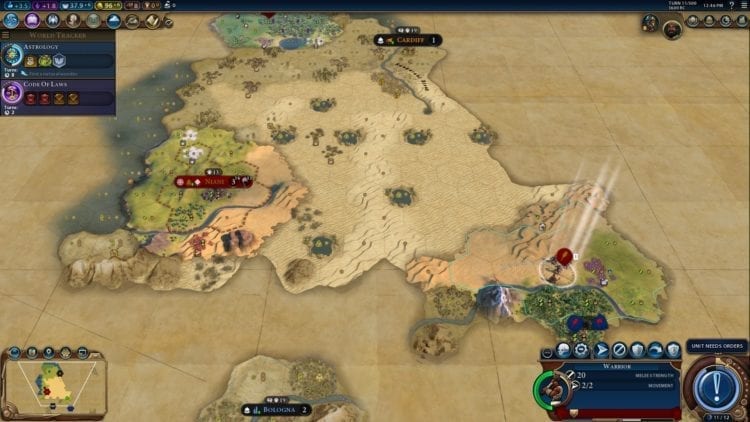 My starting area. The first two tribal villages provided a relic and a scout. Norway’s trying to settle a city but I’m ready to pounce. To the north, you’ll see the Pantanal natural wonder.

Thankfully, I was lucky with the starting area as you can see above. Even better, my first tribal village netted me a relic. The faith boost from desert tiles and the relic ensured I had a pantheon before Turn 10. Naturally, I chose Desert Folklore — Holy Sites gain +1 faith for each adjacent desert tile.

The AI will gain numerous benefits when playing on Deity difficulty as well, which means you’ll have to catch up. Although your first few techs/research choices will depend on surrounding resources, you’ll almost always go for Mining. Then, eventually, it’s Currency (to build the Suguba), and Mathematics (to build the Petra wonder).

As for your civics? Foreign Trade is a must-have. I started a few tiles next to another continent which led to an inspiration, cutting down the number of turns. Get State Workforce, Early Empire, and Political Philosophy to upgrade your government type.

You’ll want to focus on the following policies:

Since our focus is on gold and faith generation, Economic policy cards were necessary. I switched my government to a Classical Republic, and then a Merchant Republic eventually for those cards and gold benefits. 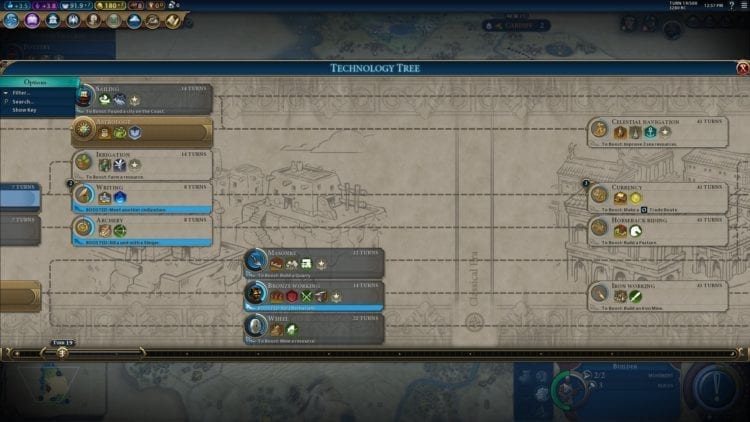 Beelining Currency to get your Sugubas up and working is integral to success. Don’t forget Mathematics for the Petra.

Norway was the first AI civ I encountered and I knew it’d be aggressive. I countered that by going on the offensive. Seeing Norway’s settler accompanied by a lone warrior, I declared a surprise war, grabbing a free settler early. Turns passed and Norway wasn’t advancing. Strangely enough, Harald eventually asked for peace, likely turning his eyes towards city-states.

Around this time, I also recruited a Governor. Your main choice should always be Reyna because of her gold-providing perks. Alternatively, you can choose Magnus, and I did just that. One of Magnus’ promotions lets you churn out settlers without losing population, and this is extremely important as Mali since your city growth will be lagging behind later on.

I missed out on getting the Hanging Gardens wonder which would have improved city growth, but that’s fine. Losing Petra, however, would be devastating. I hurried to build Petra in one of my desert cities. Oh, and remember that settler we captured? I settled right beside the Pantanal natural wonder. It’s not an optimal spot since there weren’t any desert tiles, but we can use the extra era score and culture points. 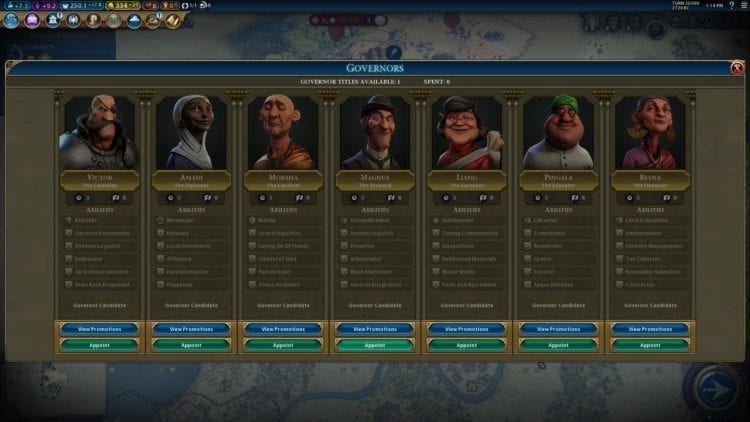 Reyna will be your moneymaking Governor, but Magnus can help if you need to churn out settlers without losing the all-important city population.

Why Can’t We Be Friends?

After the short war with Norway, I played more defensively. I’m meeting more city-states and avoiding conflict. Mali requires a peaceful mid-game, at least with your neighbors. You need those international trade routes for the cash inflow.

During the Classical Era, each trade route I had netted +12 to 14 gold, depending on the number of flat desert tiles. Once I entered the Medieval Era and the borders of my desert cities expanded and I acquired new policy cards or buildings, gold generation skyrocketed. Around this time, international trade routes provided +20 to 28 gold.

I also took care to hit Golden Ages just so I could have the extra trade route capacity. Most of my trade routes going to city-states or Norway (now my good buddy) came from the capital Niani or from Gao (which was surrounded on all sides by the desert). I also settled a couple of extra cities in the middle of the sea of sand. I focused on building Holy Sites and Sugubas. 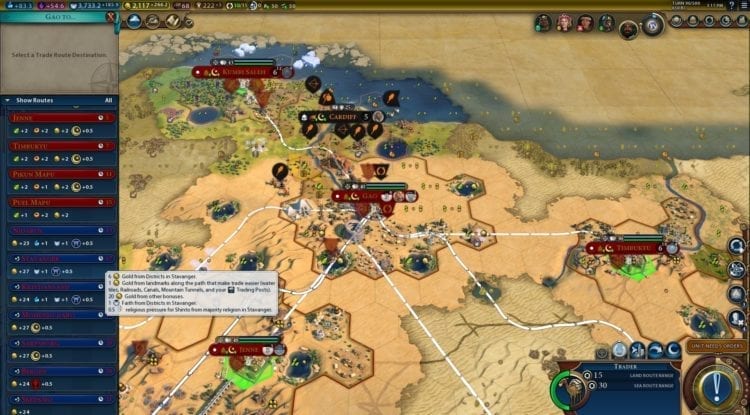 Later in the game, your international trade routes will provide sacks of gold as your borders expand to include more flat desert tiles.

I was the first civ to found a religion, and I obviously chose Islam. Mansa Musa himself went on hajj, a pilgrimage to the holy city of Mecca. It was said that while the king stayed for a time in Cairo, he spent gold so lavishly that it caused mass inflation.

Being the first to obtain a pantheon and a religion in Civilization VI: Gathering Storm is no joke. It allows your empire-building strategy to go according to plan. I already had Desert Folklore as a pantheon so these were my additional beliefs:

The above beliefs are integral to the growth of my cities as well as keeping up the tech race. After all, all the gold in the world is useless if you’re using slingers against musketmen. 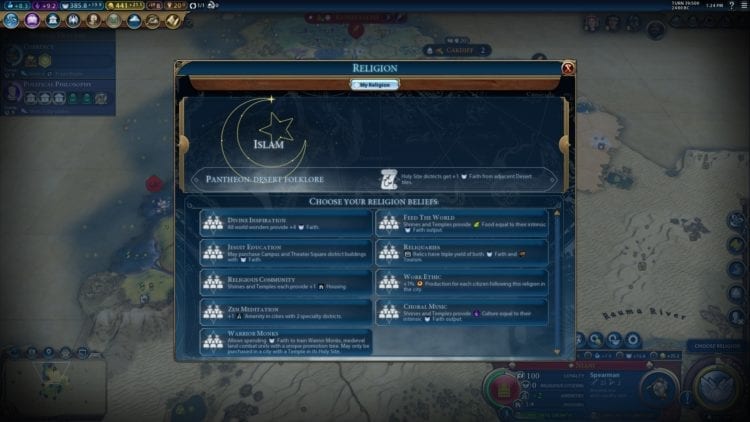 You Are Gold! Gold!

Before the Medieval Era began, Lautaro of the Mapuche decided to become aggressive. He sent his warriors my way not knowing that I had the gold to defend my territory.

I started producing units in preparation and buying additional ones to beef up my defense. Likewise, since I’m the suzerain of several city-states already, I amassed an army of levied units. Regular levying from city-states isn’t as powerful as Hungary’s ability which we’ve talked about before, but still, you can’t say no to cannon fodder.

Lautaro’s invasion ground to a halt in the deserts, and I counter-attacked. Soon, I was capturing Mapuche territory. This is my Deity game by Turn 100: 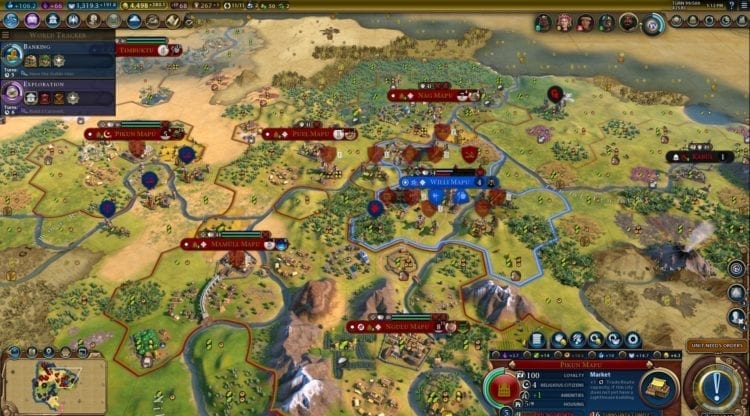 I could’ve taken out Lautaro a few turns earlier. I just waited a bit for the dramatic effect.

Money Makes The World Go Round

A couple of Golden Ages and Great Merchants, as well as several Sugubas and markets, led to 11 trade routes. I have over 1,300 faith, generating 188 faith per turn. My religious beliefs are complete, and my missionaries and apostles are spreading across the continent. Even though I lost some theological battles, I gained several relics to boost my faith and tourism output.

I have almost 4,500 gold, generating 382 gold per turn, and this was after buying some additional units and districts. Cardiff, Akkad, and Bologna are under my banner, and I can easily make the payments to levy their units. My trade routes to city-states and to Norway paid off in dividends. Now, Norway looks like it’ll declare war but I can easily swoop in.

Later in the game, your trade routes can provide +50-60 gold. Also, don’t forget to build the Big Ben wonder as that’ll not only add an extra Economic policy slot, it’ll also add an extra 50% from your treasury. Imagine having 2,000 gold per turn, 30,000 gold, and then getting an additional 15,000? You’ll laugh all the way to the bank!

Without levying units, I still have the largest and most advanced army in the world. Majority of my units were purchased. Once I meet Ngazargamu (city-state), I’d even get more discounts for unit purchases. Did you know you can get advanced units for free when all the stars align?

Yes, you can obtain tanks, advanced infantry units, and even giant death robots at zero cost. Check out the image below from Reddit user Gorshin07: 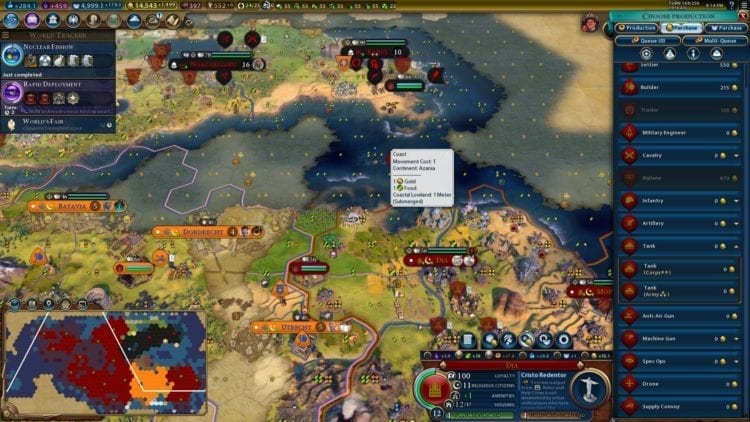 Getting freebies in the late-game would be hilarious.

I retired from this game at Turn 100 just to check out the graphs. I still had a few more leaders to meet, but this was turning into a runaway Deity victory for me. 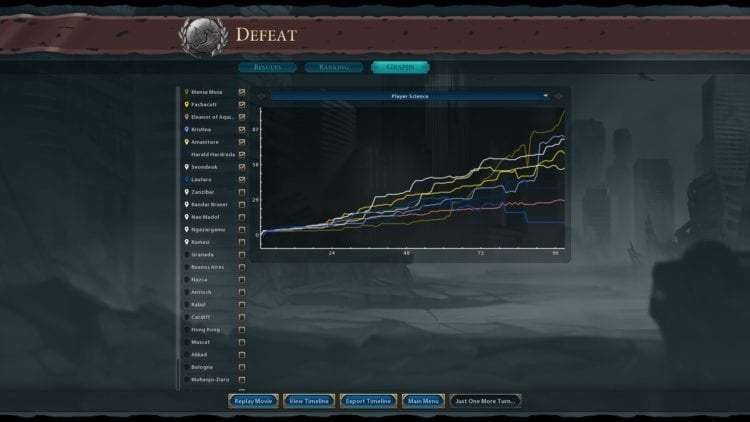 Mali was slightly ahead in the science race thanks to my religious beliefs (oh, the irony in that sentence). Korea/Seondeok was also in the game and yet I was coming out on top. 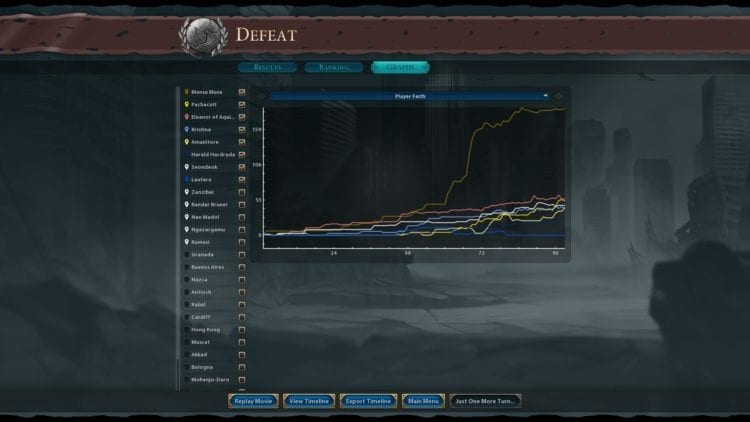 Faith generation was no contest at all. I do think only Russia could match up if it was in the game. As for gold generation? It’s about as lopsided as you can imagine.

We hope this feature and guide will help you on the road to riches with Mansa Musa in Civilization VI: Gathering Storm. You’d definitely be “wowed” by Mali, leading to easy victories on Deity difficulty. Your faith and gold generation will snowball after a slow start, and you’ll be swimming in wealth soon enough. Sadly, if you stumble and can’t catch up, it’d be a “Wow Mali” moment instead.

Week In PC Game Releases: Assassin’s Creed III Is Back!