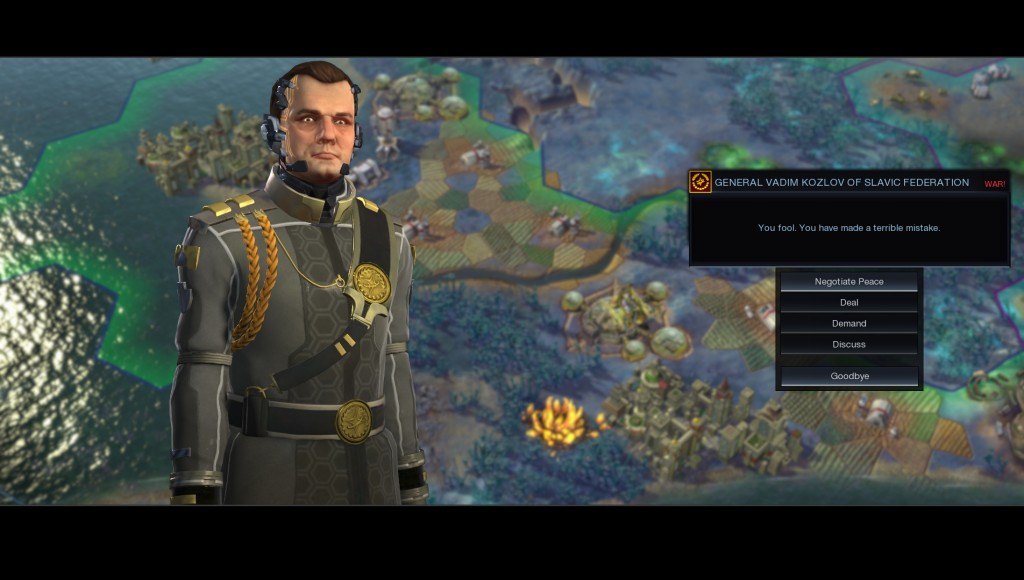 As far as I could tell nobody asked about this guy’s penetrating stare.

Today saw Civilization: Beyond Earth developers David McDonough and Will Miller answering questions about the upcoming game on Reddit. The best way to see absolutely everything they said is probably to follow this link and work through their answers (click ‘context’ to see what each post was in reply to.)

Here though, is a summary of some of the more interesting things mentioned.

On the subject of modding Civilization: Beyond Earth, the devs stated that “modding tools are on their way, and we’re getting them ready as fast as we can, though no date has been announced yet.” While people wait for those, it will be possible to mod the game’s scripts and XML files. Documentation for modding tools will be coming in the future too.

At the moment “no mods” will work in multiplayer games, but the team is “working hard on ways to make that work.” They also say that netcode has been tweaked and stabilized since Civ V, so will hopefully work a bit better.

While on the topic of multiplayer, Beyond Earth is confirmed to have a hotseat mode. Or, as the developers dubbed it, “the way we liked to play Civ IV in college.”

Somebody asked about the main differences between Civilization: Beyond Earth and Civ V, and the response seemed like something I should quote in full, so here it is:

I love the change from the tech tree to the tech web first — it really changes how the game plays and feels. The affinities as the engine of military progress, along with the unit customization that occurs, makes your army feel very personal and really lets you invest in a fighting force that expresses your playstyle. And the addition of Favors to diplomacy totally changes the meaning of even small diplomatic exchanges.

The early game was also described as being “very different” from classic Civ. “Figuring out how to deal with the aliens, either through peaceful or military means, while at the same time establishing a foothold in a strange environment takes you probably to turn 50-70.”

AI is always subject to considerable scrutiny in strategy games, especially regarding any benefits it may get at higher difficulty levels. In Beyond Earth, the AI will get “mechanical benefits similar to the higher levels in Civ 5, including accelerated resource gain.” It will also get “uneasy” as you approach a victory and “may very well” declare war in order to stop you.

Finally, it was confirmed that there will be “a turn-locked demo” available on launch day (24 October.)