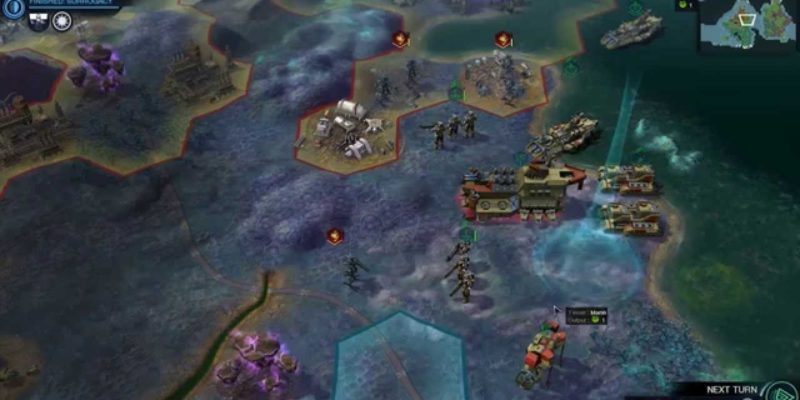 That’s going to provoke quite the diplomatic incident.

A new Civilization: Beyond Earth video, shown during this weekend’s PAX event, features more gameplay from the upcoming Firaxis strategy title. Narrative duties on the trailer are performed by female AI ‘Master Control,’ who talks viewers through various features.

Affinity (how each given culture opts to adapt to life on the planet) is touched upon, as the faction central to the video believes that terraforming and avoiding harmful cybernetics are the way forward for sustaining planetary life. This ‘Purity’ path focuses on maximising resource yields from within their own territories. We’re also shown the selection of a tech-tree-like Virtue, which in this case adds additional scientific research each turn.

Later, this faction brushes up against the Slavic Federation who (for the purposes of this trailer at least,) follow the ‘Superiority’ path of affinity, meaning they’re quite happy to dabble in radical augmentations.

Before that happens, though, there’s the tricky problem of an indigenous Civilization: Beyond Earth life form showing up in the harbour. This Kraken poses a threat to nearby cities and trade, so the humanity-loving Purity faction decide to blow it up. A combined naval and orbital fighter force manage to sink the aquatic beast, but it takes a fair amount of effort to finish it off.

Meanwhile, as diplomacy with the Slavic chaps fails, Master Control decides to declare war and begin orbital bombardments. Maybe leaving a semi-sentient AI to make all the important decisions wasn’t such a wise move.

Civilization: Beyond Earth will be released on 24 October.

Top 10 Casual Games To Play On Your PC