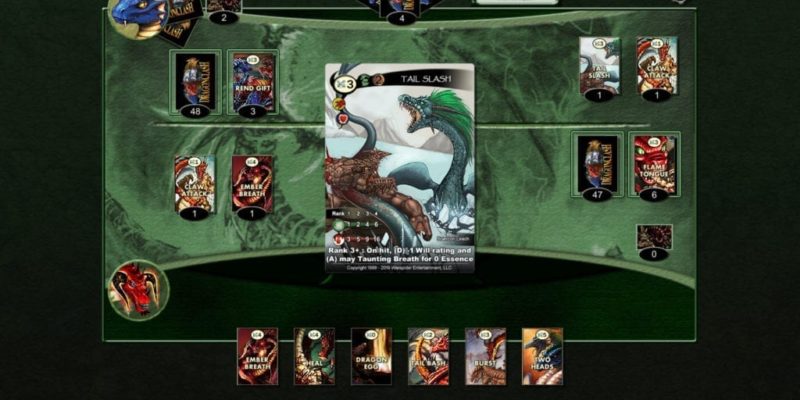 DragonClash, a nearly twenty-year-old table-top game, has been tweaked by its creator over the last two decades. After a successful Kickstarter campaign in 2013, backers received a newly reprinted set of card decks as well as a refined game manual. Now, studio Warspider Entertainment has announced that DragonClash will hit Steam Early Access on September 4.

The game will release with two of the four original decks, which include the Blue Adept and Red Breather decks. Other decks remain in development and will be released during the game’s Early Access period. According to the developer’s comments, the long-term goal is to add the Silver Channeler and Brown Mauler decks, and eventually add more boss and AI-battles, as well as a longer story mode.

This single-player strategy card game will have the player raising dragon hatchlings. The player must utilize gifts to raise their dragon’s strength. The ultimate goal is to capture a sacred dragon egg in order to end the game.

Perhaps most notable is the game’s setting. Rather than taking place in a medieval world, DragonClash takes place in a modern version of our own world. As it stands, this world has been greatly polluted by humanity. The dragons then emerge from a variety of toxic places. The red dragon rises out of nuclear fire, while the blue dragon comes from oil-infested oceans. The brown dragon emerges out of toxic sludge, while the silver dragon comes from the polluted air. Each of the dragons’ colors represent an original deck from the game.

Creator Marc Aranha first developed the card game when he was a student at NYU. Now, DragonClash finally makes its PC debut, and it will utilize player feedback while in its Early Access period. Will you be raising hatchlings and battling dragons with your cards this September? Let us know!

Romance of The Three Kingdoms XIV announced for PC and PS4