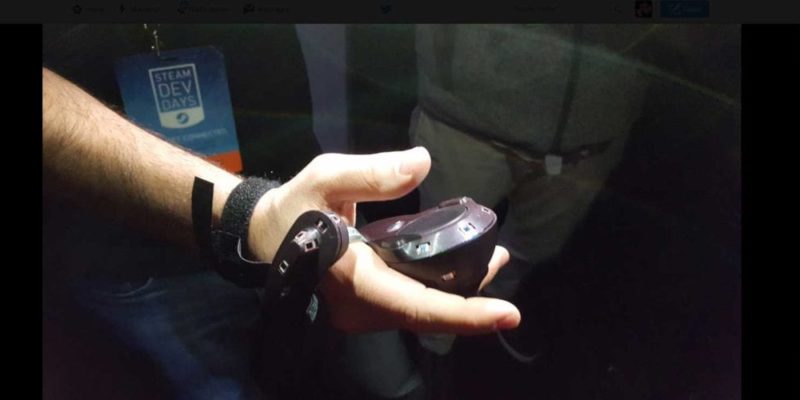 Yesterday at Steam Dev Days Valve revealed they were working on a new VR controller prototype and more images have now appeared from the event.

The new controller images reveal that it no longer needs to be gripped like the current controllers. This allows the user to not only flex the hand but also access functions via the central device sitting in the palm. The controllers are strapped to the back of the hand and wrist which means there is no need to grip.

The positioning of the controller on the palm and the fact you don’t need to actually hold it means that actions such as throwing an object should feel more intuitive. It means the hand inside the VR world will feel more like it’s mimicking your hand’s actions.

As this is a prototype you can see the sensors on the controllers and the trackpad sits within the palm of the hand with button easily accessible either side.

This new design is moving toward what we see with the Oculus Touch, and whatever they eventually turn out like will be an improvement in the current Vive controllers.

These new controllers probably won’t appear any time soon. With VR still being adopted at a slow rate, there’s probably no rush to get these out. Vive and Rift owners have already spent huge amounts on the first systems and pushing new peripherals continually will not go down well with consumers.