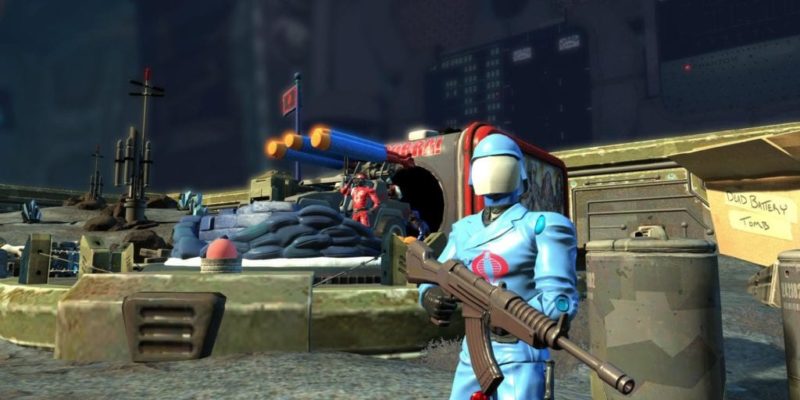 The last two armies for Toy Soldiers: War Chest have been revealed… but, alas, they’re not Barbie and Thundercats.

Instead, Cobra Commander and the forces of Cobra will be taking to the toy battlefield, along with Ezio and the Assassin’s Brotherhood. They’ll be joined by He-Man and GI Joe in terms of licensed armies, while the game’s own Phantom, Dark Lord, Kaiser, and Starbright will be making up the other four.

All of that said, the licensed armies are DLC only. The base product of Toy Soldiers: War Chest will cost $19.99 and will only offer Phantom, Dark Lord, Kaiser, and Starbright, with the remaining armies available as either $4.99 DLC or all together in the $14.99 Legendary Heroes pack. Alternatively, you can opt for the $29.99 Toy Soldiers: War Chest Hall of Fame Edition, in which case you get all eight armies at once.

I’m just going to recap that last paragraph in an attempt to make it less confusing. The base game will cost $19.99, and then you can either pay $14.99 for all of the DLC armies at once, or $4.99 for them individually. That means either $35 or $40, if you buy the base game and then decide you want the DLC. Alternatively, you can opt for the Hall of Fame Edition version of the game which offers everything for $30.

If you’re wondering why there are loads of different versions, I don’t know. I’m half-thinking “because it’s Ubisoft and they refuse to release anything in just one version”, but I’m also wondering if it’s because of the GI Joe and He-Man licensing costs, and because people might balk at a primarily digital game being $30? No idea! On the plus side, holy shit guys you can totally make Ezio fight He-Man.

Toy Soldiers: War Chest is due out, in its many and varied iterations, this summer. You can see some screenshots of Ezio and Cobra Commander (and their respective armies) below.

Ken you guess who’s been added to the Street Fighter V roster?