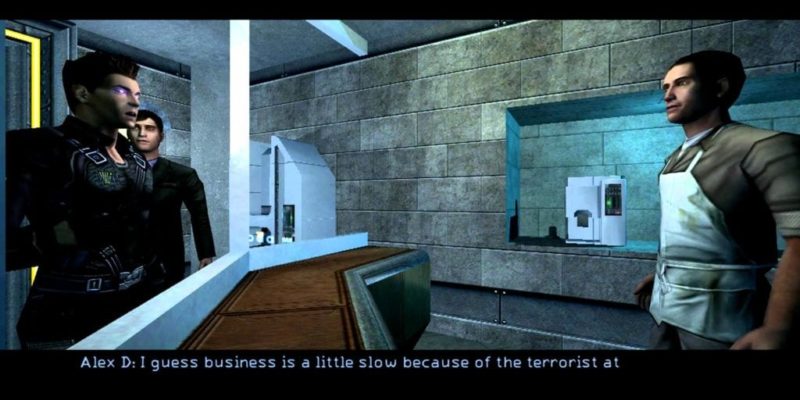 Note: This tongue-in-cheek article was written as part of the Wacky Week theme. Try not to take it too seriously. To see all the wacky articles for this week’s theme, check out the hub.

One of the more interesting and illuminating, not to mention oddly emphatic, aspects of Deus Ex: Invisible War (a game panned by critics despite being genuinely fun) was the coffee rivalry between coffee shops Queequeeg’s and Pequod’s. Now, a bit of Googling will tell you that there must be some relation between the two considering they are both sourced from Moby Dick: Queequeeg is the chief harpooner on the ship Pequod.

You notice throughout the game these coffee shops, and the competition between them. People have their preferences and, sure, you can have yours (me? I hate coffee). You notice the different qualities of each coffee shop in each city: Pequod’s is upscale, Queequeg’s is blue-collar. Though this scenario seems fairly normal and can be noted as a nice way that the developers breathed life into the game world (much like they did with NG Resonance, but more on that in a bit), it quite quickly is shown to be a something more.

In the Pequod’s coffee shop in Upper Seattle, the first area that isn’t a tutorial level, you are propositioned by the manager to burn the supplies of competitor Queequeg’s coffee beans. Your character notes quite perceptively: “That’s arson.” The reason? His expenses in the upper [class] region of Seattle are higher and, as such, he needs to work constantly. He notes that Queequeg’s manager is likely to be “loafing around at home” since he doesn’t need to work as much. Needless to say, this is a bit extreme. It’s not like he’ll be getting his competitor’s customers (Lower Seattle hoodlums) after taking out his competitor’s supply of coffee beans. This is pure bitterness at work born from the competition between these two coffee shops. Coffee shops, my dear readers. I don’t know anyone that dedicated to their job that isn’t a soldier.

NG Resonance is a spoiled brat, but her manager is cool.

Later, in Cairo, you encounter NG Resonance, a pop singer also present throughout the game in various clubs as a jukebox hologram that only plays her music. She also acts as a useful/creepy sort of Big Brother-esque entity. The real artist behind NG Resonance is an industrial group known as kidneythieves, which I found appropriate enough for the game. Anyway, you can act on Pequod’s or Queequeg’s behalf and bribe NG’s manager to endorse the brand, another step in inciting competition and another step towards the truth, a concept Deus Ex plays with as series.

In Trier, Germany, the next stop after Cairo, you have one final mission related to this coffee war: a Queequeg’s manager’s lawsuit against Pequod’s for false advertising was dismissed and he wants to know why. He’ll reward you for breaking into the evidence room of the local law-enforcement agency and finding out; “What I’d pay to know what’s really going on….” That’s a question I ask myself every day, brother.

So, being a completionist, JC goes and investigates to find the truth. It is discovered that both Queequeg’s and Pequod’s are owned by the same company! Well, that puts the past involvement with both shops into perspective. You’ve encountered a man so frustrated with his job he was willing to hire someone to commit arson, another willing to bribe an endorsement out of NG’s manager to increase profits for his company, and a final one who is not given information as to why his lawsuit was dropped due to corporate interference. This is something not unknown to us in the real world:

We are very much used to having choice. So much so that we don’t realize that it can be a fabrication as companies merge and turn into near-monopolies. The actions of the managers of both Queequeg’s and Pequod’s are both strange and sad. It’s strange because those actions are so extreme and sad because they are so futile. All you end up doing is getting the parent company more attention and more money, no matter which shop you side with. All you have left is the option to suggest that Trier’s Queequeg’s manager expose the truth to the media, which is either incredibly bold or just as futile as any other action.

This leaves us with one last important question: Pequod’s or Queequeg’s?