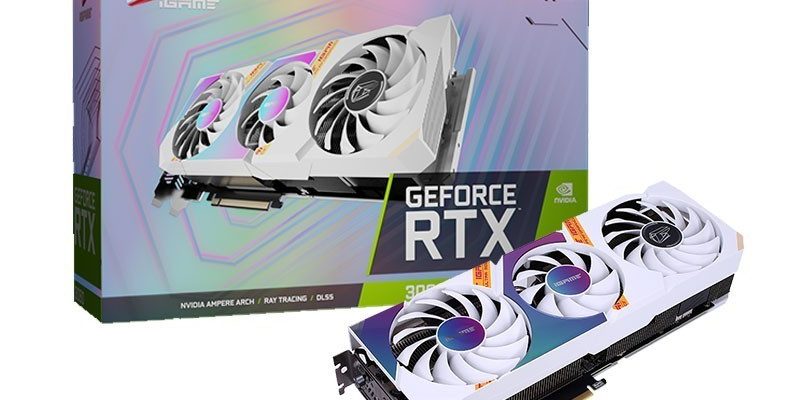 Nvidia used its time at CES 2021 to announce a number of new products for the RTX family. It revealed its mobile lineup of Ampere-based cards that will become available as soon as this month, but it also confirmed the standard model of the GeForce RTX 3060. It’s quite different from the 3060 Ti as you will quickly discover, because it features a whopping 12 GBs of VRAM as opposed to 8 GBs in the Ti. Why Nvidia calls the two different products by a similar name is a separate discussion, but the potential for the RTX 3060 is exciting.

Naturally, Nvidia’s various board partners, such as Colorful, took advantage of the spotlight to announce custom variants of the new GeForce RTX 3060. Colorful showed three versions, and you can probably guess how they differ. There’s a base model, while the other two options feature improved cooling solutions with some overclocks for slightly better performance. Each model sports a distinct visual design as well, so you can go plain jane with the NB model or light it up with the Advanced OC.

The company hasn’t revealed clock speeds or pricing yet, but we are at least able to discern a few details based upon the images and limited information listed. As mentioned, the Colorful NB model is just a standard GeForce RTX 3060. It features a black and red shroud with aggressive angles and a triple-fan design. The NB features nine-blade fans and what appears to be a very functional cooler. The specs only mention three 6 mm heatpipes, but the 3060 uses much less power than higher tier cards. The NB comes in at 310 mm (L) x 130 mm (W) x 53 mm (H) and is described as an “over 2 slot” design. For the I/O you can expect three DisplayPort connections and one for HDMI.

The next Colorful GeForce RTX 3060 is dubbed the Ultra W OC and is part of the iGame series. Let’s just say it’s vibrant, per the brand name. The shroud comes in a matte white base color with an iridescent coating for accents. There’s also some random iGame badging slapped on it. It may or may not appeal to your sense of style. You can see the design above, which is the feature image of this story.

Moving on to the design, it features a similar looking cooler, but with improved fans. It features two larger 13-blade fans with a central, smaller nine-blade fan. The design features two 6 mm and two 8 mm aluminum heatpipes as well. Together, these differences will handle the extra heat anticipated from the overclock, whatever that may be. The dimensions come in at 310 mm (L) x 131.5 mm (W) x 56 mm (H) and is also described as more than two slots. It features the same I/O interface as the NB.

Finally, we have the top-tier Colorful GeForce RTX 3060, dubbed the Advanced OC. This card features another distinct design in addition to some LEDs to light up your case. We’re assuming the lighting only comes in red. The silver shroud gives the GPU a cleaner look, slightly reminiscent of the stock Nvidia GTX 10 Series shroud.

The Advanced OC looks to feature the same fan design as the Ultra W OC, but features four 8 mm heatpipes, indicating this one is going to offer the highest — or at least most stable — boost clock speeds. The card dimensions are 315.5 mm (L) x 131 mm (W) x 53 mm (H) and is again described as over 2 slots. Expect the same I/O ports again.

Not a bad lineup at all from Colorful, as the designs offer style variety and seemingly good cooling features. We’re looking forward to the Colorful GeForce RTX 3060 launch in February and hope gamers are able to get their hands on cards this time around. You can preview the mentioned models on Colorful’s website in the meantime. Hopefully the pricing and clock speeds are good. As always, we recommend you look for build quality reviews and benchmark data before choosing to buy any brand of graphics card.