Trying to follow one of the greatest RTS’ of all-time is no easy task. Expectations for games such as Company of Heroes 2 are high, perhaps so high that it’s impossible to meet them.

We chat to Relic’s Quinn Duffy, game director on Company of Heroes 2, about exactly that and how the team has attempted to provide fans with the highest quality game possible. Weather systems, the status of publisher THQ and how the RTS can be progressed are also discussed.

Our latest preview of Company of Heroes 2 can be found here. 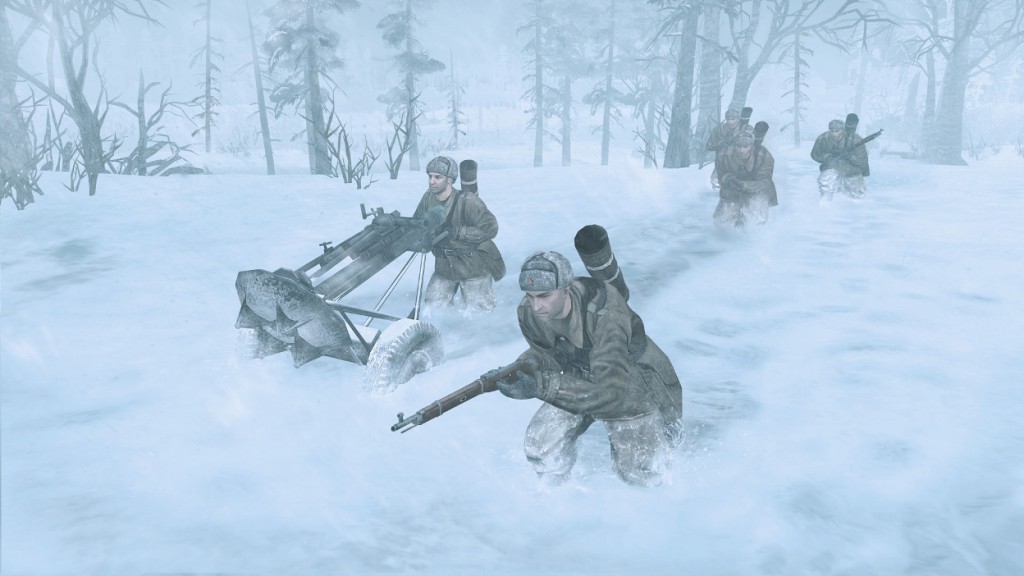 IncGamers: We last saw the game a few months back, what have you implemented since then?

Quinn Duffy: Well, a bunch of new stuff is in the build that you just saw (see our preview). The AI has been advanced and is running live in the demo, there’s been a lot more optimisation to what we already had and, in general, it feels a lot more like a real game.

IG: One of the big features that you’ve been talking about is the dynamic weather system. Just how dynamic is it?

QD: We can run the whole spectrum from making it completely random to having a blizzard stay for the whole game or to make the randomness come and go in waves. What we’ll probably do in the finished game is to cycle it, because I think it’s more interesting to have it come and go rather than to stay static. Not every level will be the same, either.

IG: So far we’ve only seen wintery levels – ice, snow, blizzards etc – is that what the bulk of the game is?

QD: No. I don’t know the exact numbers but roughly a third of the campaign is based in cold weather conditions. The Eastern Front conflict took place over a lot of years, so we’ve got a lot of ground to cover. They fought over spring, summer and fall as well, so that is represented in the campaign.

The weather has a lot of new technology driving it, so we’ve really wanted to see what we can do with that. Plus, the snow is new to the series so it feels nice to present something that is completely fresh and unique for us.

IG: Has the weather been the most difficult thing to get right?

QD: It’s a big technological and gameplay investment. Trying to figure out how to have it impact the player has been difficult. You don’t want it to feel punitive, you want to force the player to make some interesting decisions based on the weather so that it’s something you want to interact with, it’s no good if everyone wants to turn it off.

IG: Will you be allowing players to tweak the weather settings themselves?

QD: That kind of thing is still being looked at for players that are setting up their own matches, and we’ll see how that goes and what level of optional settings work for different games. 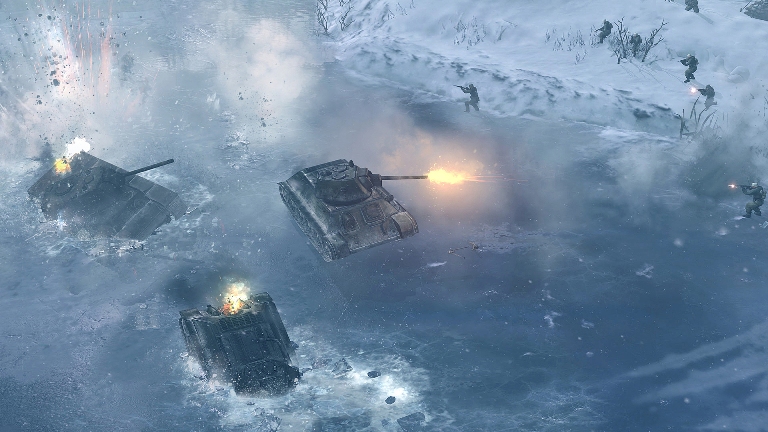 IG: The weather can ultimately kill your troops, which makes the game seem more difficult than Company of Heroes 1. How much harder is it in comparison to the first game?

QD: It’s not really harder, but the game does encourage a different pace than what we’ve had before. You really do need to manage the battlefield more than you have in the past. Your guys do suffer from the cold weather, but the ‘normal’ gameplay of fighting and flanking still exists; they don’t suffer so much that you can’t use them as you want to use them.

The original did have elements of map control, but the new weather systems mean that it’s more vital to be aware of it now. You’ll want to move up and set up and make sure you take and defend buildings, that’s much more important now because of the weather.

IG: I’ve not seen another example of the environment playing such a big role in the health of your troops, not to the point where they can die without seeing the enemy. It almost seems as though the weather is acting as another player, making it a three-way struggle…

QD: That’s very much the way we look at it. The weather in that area at the time was a real force that dealt death to both sides. That really is a very important way of looking at winter in the game, it’s going to be in there with its own agenda – to freeze the shit out of people – so players need to adjust to that.

IG: How far do you think you can take the realism aspect before it stops being fun, or makes the game too difficult?

QD: I think it gets too far when it goes beyond the realm of most people’s experience. Everyone can understand a guy freezing because you can show their breath and we can deliver the feeling of cold through the ambience of the game.

Having your tanks freeze up from the cold and their treads seizing up, those are things that players have more of a challenge understanding and often just feels random. So we’re not going to push things as far as that, even though that sort of thing did affect both sides.

Other things like a blizzard coming in and it preventing you from calling in bombing runs with your aircraft, players can understand that cause and effect situation and it’s something that they’re happy to contend with in terms of gameplay.

IG: Was part of the reason you chose the Eastern Front setting because you wanted to differentiate this game as much as possible from the first one? Through different environments, units, weather etc.

QD: I’d be lying if I said that it didn’t factor in to our decisions, for sure. From our perspective, from a historical perspective, we had this huge conflict going on that we hadn’t touched upon. We wanted to tell that story.

And, yes, it’s a good way to differentiate ourselves from our own products and others that are on the market. It seemed like the time and place we could focus on that made the most sense. 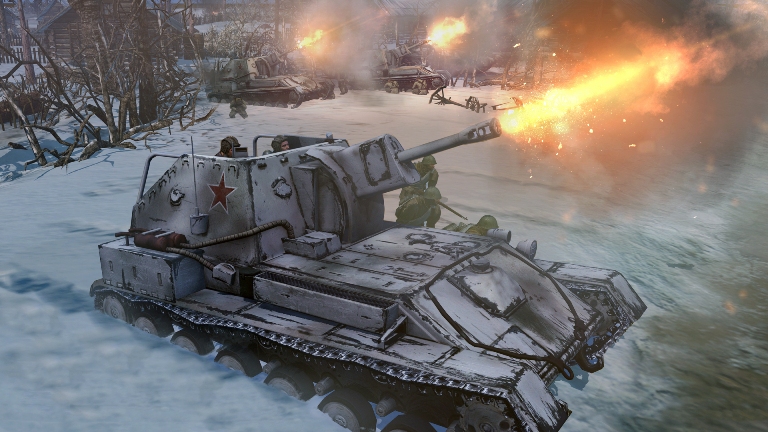 IG: You say others on the market… but has the bar even been raised since the first Company of Heroes? Is it still the best RTS available today?

QD: If you look on GameRankings or MetaCritic, we’re way up there. I don’t know if that game has been superseded. It had a combination of gameplay, audio and attention to detail that really added up and created a compelling experience.

In my opinion, I don’t think that has been matched. I play a game of Company of Heroes and I’m exhausted. It’s an experience and I haven’t experienced that in another RTS game. There have been some other great games, but the full blend of elements… I haven’t seen that. We’re getting to that level in Company of Heroes 2.

IG: This is a genre that has been around for a long time and been tackled by a lot of developers. How much scope is there to try something completely new? How much room is there for innovation?

QD: Our games, to me, are markedly different from standard RTS games. When we interview people for jobs and they say that they don’t have much RTS experience, that’s not really an issue for us. I don’t consider Company of Heroes a typical RTS. We’ve got a different tactical approach and a lot of features that make us stand out.

What we want to do is to introduce some cool new ideas, give the players some new toys and add a lot of fresh new experiences without losing those core elements. That’s the balance that we really try to nail down and maintain from the first game.

IG: Do you worry that, given the status and popularity of the first game, it is going to be impossible to meet expectations?

QD: Every night I worry about that. [Laughs] It’s not like I wake up in a cold sweat, but it is a concern. We do have a very high bar to meet.

I worked on the original from the beginning so I understand the intricacies of it, but a lot of what we’re doing with Company of Heroes 2 is stuff that I wish could have been in the original. So, I think it’s adding a lot of neat things. Each idea might not seem that big but when you see them all in action together I think it’s going to play in a fresh new way.

IG: When did the design of the game actually begin?

QD: We originally had plans for an Eastern Front expansion for the original, but we couldn’t do what we wanted to. So, taking that into account, there has been design for this going back several years.

I would say that the real work began in about 2009, if memory serves me right. That’s when we put our team together and began our research. 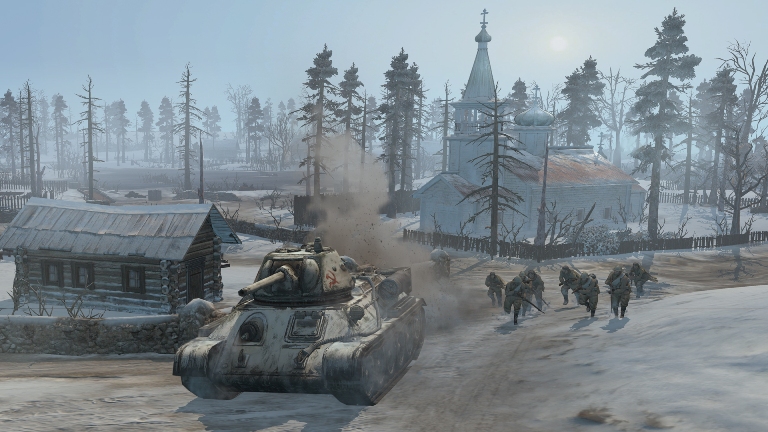 QD: We’ve got an acceptable budget. It’s like Rolls Royce talking about horsepower: it’s “adequate”. Company of Heroes had a big budget with the completely new engine and ground-up technology. When you’re doing a brand new IP and using brand new technology, that really raises the cost.

We’re a little smarter with our money these days, though.

IG: Is it going to require especially lofty PC specs to run?

QD: Our goal is to get as low as possible. We don’t have our PC specs yet, but we want to be able to run on a broad range of systems. Because so much of our gameplay is based on the visual components, we don’t want to undersell the product. We don’t want to get to a point where we say “this is the min spec” but it’s the crappiest looking game out there.

Y’know, min spec numbers are usually absolute garbage; we want a good looking game on a min spec machine. Then on the newer machines with DX11 it’s going to look stunning, it’s going to be amazing.

IG: Ever thought about bringing the series to consoles? Is RTS even viable on a console?

We never thought about that for Company of Heroes, it was never a design goal for us. I don’t think you can deliver that same tactical experience. I’m looking forward to what’s next on consoles, though.

Project Duru is an upcoming story of mole-rats and depression

Beyond a Steel Sky impressions – Full on adventure gaming