Prepare your finest crumpets and get ready to lay on a slap-up tea spread, because the British Forces are about to supply Company of Heroes 2 with its politest faction to date. And if you thought that introductory sentence was a bit stereotypical, you aren’t going to deal at all well with the vocal barks Relic has given most of the units. The Welsh engineers are never knowingly too far from a “boyo”, and everybody else can’t stop talking about tea and Churchill. Or calling people wankers.

In fairness it’s nice to see a bit of a spread of accents (though they’re mostly national rather than regional). There’s a little bit more nuance than the usual ‘broad strokes’ faction approach, and cod-anglo lines like “a tank is ready to give somebody a bloody nose!” are pretty good for a laugh.

But while the characterisation is somewhat by-the-book-of-Britishness, the engagement options provided by this upcoming stand-alone, multiplayer expansion bear more in-depth explanation. 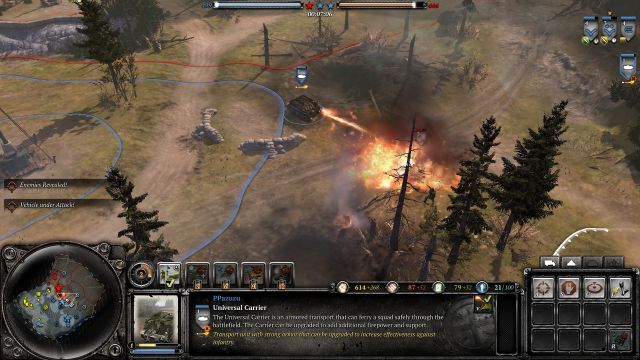 The British Forces feel as though they can loosely be defined by the either-or ‘Hammer’ and ‘Anvil’ tactical options which can eventually be unlocked from the tank-constructing Company Command Post building. As the names suggest, these respectively expand the firepower and durability of the faction by opening up new units (a tank on each branch) and unit abilities; things like tanks with ‘war speed’ on the Hammer branch, and quicker engineer repairs under Anvil.

That’s a particular branching choice from one building, but a similar dichotomy runs throughout the British faction. It’d be foolish to make too many concrete judgments about how a new army will play in the pre-release period (especially as we all know that there’ll be inevitable, post-release patching once it’s out in the wider world), but it does appear to be a force intended for a certain flexibility when playing alone, and a more specialised role within a group of allies.

The early-game choices are a pretty simple line-up of infantry (which can quickly be expanded to five-man squads with basic grenades), Vickers machine gun teams, and a light armoured carrier that can be used to ferry troops or kitted out with a flamethrower or Vickers of its own.

Even here though, the basic British infantry can be further strengthened with flares to light up a location for attack by your base-situated Howitzer guns, or given med kits for more staying power. 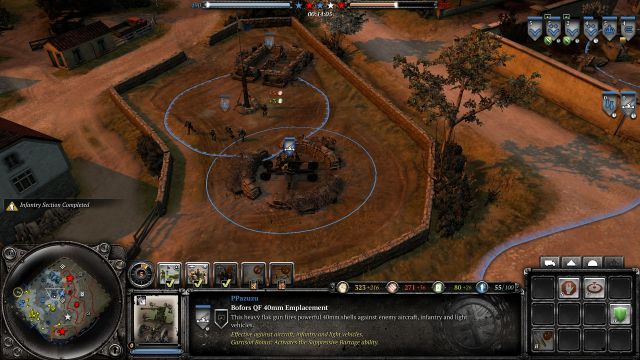 Digging in with the engineers.

Once the Platoon Command Post is set up, the British get access to a bunch of anti-tank options and a handful of embedded defensive positions by way of engineer squads. For those who’d rather stick with the mobile firepower route, the Platoon Post can unlock a decent armoured car (which won’t stand up to tanks, but is a nice stop-gap to more serious vehicles). If you’re planning to dig in, the alternative Bofors 40mm cannon (built by the engineers) is going to be a better choice. Despite being touted as an anti-aircraft gun, it’s actually suited to countering infantry and light armour.

The sniper produced by this building has anti-tank capabilities too, and the engineers’ staple entrenched unit is a pair of mortars. These come with the usual plethora of mortar bombardment abilities.

If the engineers are able to set up a selection of these in key battlefield positions, and staff the embedded mortars and guns with infantry, they should prove extremely hard to shift.

The third and final British Forces building is the aforementioned Company Command Post; an unassuming tin shed that serves as the production line for an array of tanks. This is where you’ll roll out your Hammer (Comet) or Anvil (Churchill) tanks, as well as the light (Centaur), medium (Cromwell) and heavy (Sherman Firefly) varieties. The latter is a mobile 17-pound gun that can cause no end of trouble to enemy tanks, and can be upgraded to fire rockets as further punishment. 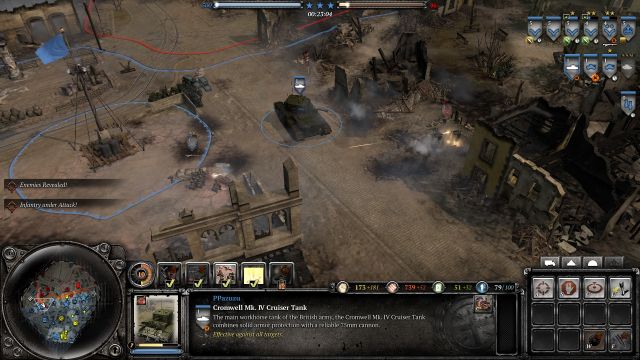 Looks like the enemy’s fortunes are about to … tank.

As with any Company of Heroes 2 faction, units are only part of the story. The British Forces also have six different commanders (three available from the start, three that can be found in ‘war spoils’ through play). Relic has already spelled out the doctrine abilities for each of these on this page, so there’s little point going step-by-step over that same territory. The main detail to add is that the latter three on that page are the war spoils ones.

The abilities themselves fall into the broad categories of additional requisitioned units (like tanks or artillery), heavy ‘off screen’ barrages, aircraft bombardments, and options to either reinforce an existing unit’s power (like designating a command vehicle) or repair and bolster armour in the field.

Timed correctly, the Commando Regiment’s ‘Smoke Raid’ and ‘Assault’ can give a nice additional push to any offensive operations. It’s also pretty fun to drop a glider full of commandos on a vulnerable objective. The Special Weapons’ resupply half-track is great for dumping out some quick anti-tank rockets or machine guns to out-gunned infantry, and the Royal Engineer’s flame mortar support (which spells major trouble for all occupied enemy structures) is prime candidate for being toned down a bit before release.

If in doubt, just drop a glider on someone.

Eight included maps feature several locations on or around the Rhine river (Arnham, Düsseldorf, and so on) plus one that’s straightforwardly called ‘Across the Rhine’. Several of the maps base themselves around ruined towns and industry, leaving your units hunkering behind crumbling walls and bombed out shells of buildings. Perhaps wondering whether this capture point is really worth all the effort.

Heidelberg Crossings focuses the attention on two central bridges separating the forces, while Lorch has an imposing castle in its south-eastern corner (complete with capture point in the courtyard).

Again, confident predictions about how The British Forces will hold up in multiplayer don’t seem sensible at this early juncture. I’m an utter novice at Company of Heroes 2 multiplayer, and matches against the AI are no indication of how human opponents will act and react to the various new units. My only tentative suggestion would be that they may be most vulnerable during the early game period, before they can get a Platoon Command Post out there. 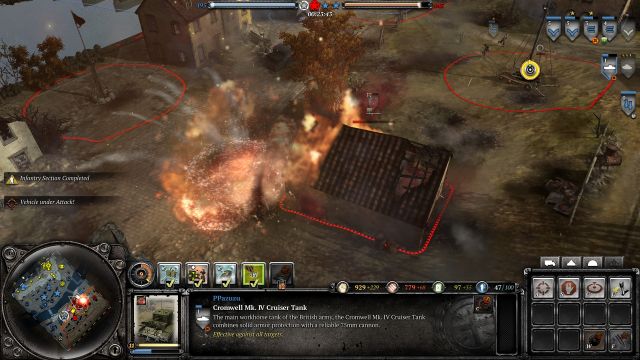 That fire mortar doctrine really is a bit too good.

At this stage of the game’s life, most will probably already know whether they wish to pick up another Company of Heroes 2 faction or not. For those who do think this might be the time to take the title up, the ‘à la carte’ style in which individual factions can be purchased as cheaper, stand-alone gateways to multiplayer remains a smart idea.

Pre-release, the British feel like a strong addition, whose Hammer or Anvil tactics permeate the majority of the unit and commander choices. Though the Hammer/Anvil choice is a specific either-or on the Company Command Post, it’s still possible to juggle the two with army composition. Time, and a great deal of live testing, will tell whether they have a massive weakness, an over-powered strategy, or are, to put it in Relic’s preferred parlance, already quite tickety-boo.

It’ll be possible to find out for yourself, ahead of the 3 September release, by snagging a Steam key for the British Forces Limited Free Trial. We should have a stack to give away here at PC Invasion later in the week, so keep your reconnaissance planes in our skies.

By Steven Wong15 hours ago
Previews