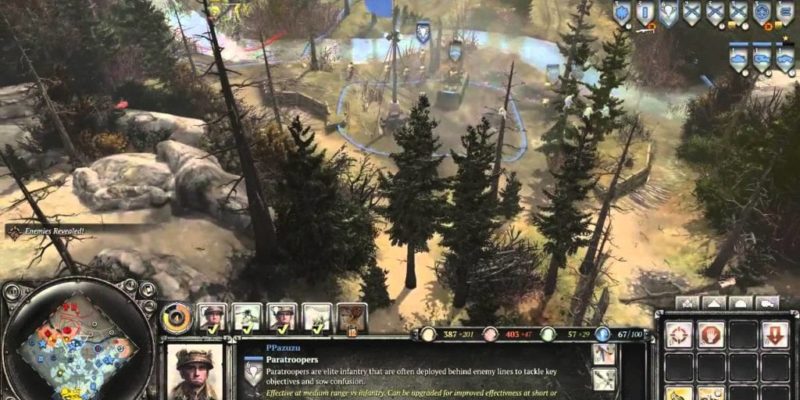 This isn’t a review. Since Company of Heroes 2: The Western Front Armies is a multiplayer only stand-alone expansion, it’d be crazy to do this as a regular critique with a score shoved on the end. The real test for an expansion of this sort is when it’s sent through hundreds of different permutations in the hands of the general player base; people who’ve put scores of hours into the Company of Heroes 2 multiplayer.

That doesn’t happen until 24 June and beyond. So no matter what my early impressions are of Western Front Armies, there’s absolutely no point trying offer any kind of definitive word on it before it’s gone through the initial stages of inevitable re-balancing.

Volksgrenadiers exchange bullets with some US Riflemen.

What I can do though is explain how this slightly unusual stand-alone release works, note some of the major additions and give my thoughts of the two new army factions it introduces to the game. SEGA has had a oddly draconian NDA in place during alpha testing and, for reasons best known to the publisher, has opted not to do an open beta test at all. Beyond the most avid Company of Heroes 2 players, I get the sense people are still a little in the dark about this release.

Here’s how it works: Western Front Armies is available as a stand-alone purchase of either one ($13.00) or both ($20.00) of the US and Oberkommando West forces. The base Company of Heroes 2 game isn’t required. Buying some form of Western Front Armies gives you access to all the usual CoH2 multiplayer modes (excluding Theatre of War stuff) and AI skirmish bot matches with your owned faction(s).

If you do already own the main CoH2 game, it’s pretty much the same deal. The purchased faction(s) will be added alongside the Germans and Soviets in the list of armies you can use in multiplayer. Aside from AI skirmishes, there isn’t any kind of single player campaign activity.

The US M20, touring the wintery streets of Belgium.

The release of Western Front Armies is also going to bring a couple of major changes to the game as a whole, no matter whether the add-on is purchased. The old war bulletin system of grinding out 5% accuracy on your mortars for killing 5,000 tanks (or whatever) is out, and a new “war spoils” system is in. War spoils appear to have a chance of showing up after every multiplayer match (this was inconsistent for me, so there may be a more subtle trigger) and seem somewhat random. They fulfill the same role as bulletins and you can still choose up to three of them per loadout, but it’s a fairly substantial change to the progression and distribution method.

Because I already owned Company of Heroes 2 (kind of, my press review version actually self-destructed on release day and no longer loads,) every single Soviet and German bulletin from the old system was now unlocked by default. I’m not sure where this new system will leave Commanders, as I also had temporary (50 hours and counting) access to some “rare” Commander options. They may show up in war drops or Relic may still want to pursue their dubious DLC policy. Perhaps both. It’s not entirely clear.

Alongside those changes, there’s now a public game list that can be access through the multiplayer skirmish menu. It’s an alternative to automatch or games with specific friends, allowing you to browse through a selection of matches that the host has opted to tag as public. This should go down pretty well with the players who’ve been asking Relic for just such a thing.

The new pair of factions feel pretty distinct, both from each other and from the existing Soviet and German forces. US players start with a static, fully constructed base, but are restricted from producing all their units by a chain of command structure. Until a Lieutenant unit is called in, they can’t build the M20 utility car, machine gun teams or the AA half-track. Likewise, a Captain and Major (respectively) are needed for anti-tank guns, field artillery and heavier armour like the Sherman or M36 tank destroyer. It feels like a pretty versatile selection, able to adapt to shifting battlefield circumstances.

The basic troop types available to the Americans are good old Riflemen (who can be upgraded to wield grenades and anti-tank weaponry) and the trench-coated Rear Echelons. Effectively engineers, these guys can do vehicle repairs, build caches on victory points and have a neat volley fire ability for suppressing enemies. You can roll out an ambulance too, which will crumple under fire but can heal nearby troops on the field.

Command units aren’t just there to unlock other options, the Major has the capability to recon small areas and call down artillery strikes. A pretty dangerous combination. They’re also able to call a fake artillery strike, which leaves the traditional flare markers but doesn’t actually do anything. Potentially helpful for spooking somebody out of position.

With the three supplied US Commander Doctrines, it’s possible to bolster your armour (or ‘armor’ if you’re sticking in character) options with the M10 Wolverine and Bulldozer Sherman, or support your infantry with a mortar half-track and Browning LMGs. It’s tempting just to stick to the Airborne Doctrine though, because the chance to drop weaponry and paratroopers out of the sky is quite seductive.

In contrast to the simplicity of the US faction, Oberkommando West base building is quite involved. They start the game with one half-track Command HQ building already in place, but will very quickly have a second half-track with which to construct another one. Oberkommando buildings can be placed on any victory point still connected to captured territory, so you have a strategic choice whether to push boldly forwards (and maybe bolster an important area) or play safer and keep your base points closer to home.

After the second half-track building has been placed (or destroyed,) another one will show up after three minutes. It’s possible to turn each half-track into either a battlegroup HQ, mechanised regiment HQ or (once either of those has already been placed) a Schwerer Panzer HQ. After all three buildings are up and running, the Oberkommando get access to the incredibly expensive and rather devastating King Tiger tank.

The general Oberkommando theme is one of costly, veteran troops and armour, moving fluidly and with speed. A lot of the Commanders reflect this approach, particularly the Breakthrough Doctrine which allows more rapid capture of enemy territory, recruitment of Panzerfusilier recon troops, a heavy artillery bombardment (with bonus smokescreen) and the Jagdtiger panzer.

The Special Operations commander presents a more covert option, enabling you to hide all troop markers on the mini-map with ‘radio silence,’ plus infiltration tactics for infantry and infrared StG44‘s for long-ranged engagements. Opting for the Luftwaffe Ground Forces instead will allow you to launch a full on combined airborne assault of Stukas and elite Fallschirmjager troops, plus a ‘Valiant Assault’ ability that drives infantry units to move more quickly and attack with greater efficiency.

The Oberkommando HQ looks kind of like a 1970s caravan holiday.

Again, it’s impossible at this early stage to comment too much on how the introduction of the Western Front Armies will affect the overall balance of the game, but from what I’ve seen the two additional factions seem as if they can bring some interesting diversity.

Nine new maps are included in the expansion too, largely based around conflicts in Belgium (La Gleize, Lanzerath Ambush, Trois Pont and so on.) Though some of them are wintery, they don’t seem to use any of the cold/blizzard mechanics from the Russian locations.

In a broader sense, it’ll be interesting to see whether this expansion brings in many new players or if it’ll be concentrated amongst existing players looking for a new faction to explore. Newbies will be faced with quite a rough learning curve, because although the in-game tutorial mission, videos and text tips try hard to cover the basics, they’re pretty inadequate for conveying any of the nuances of Company of Heroes 2 multiplayer. The game shares an unexpected similarity with chess, in that you want to get your opening moves just right. A few playable pointers and examples of that art would help people a lot.

It was also disappointing to find that even one year later and with a better graphics card in my box, the game still runs quite poorly without much apparent cause. Occasional hang-ups even at modest settings weren’t what I was expecting after a potential twelve months of optimisation.

One of those elusive war spoils. A 3% rifleman/volksgrenadier reload bonus.

Changes like the introduction of a searchable public games list and the alterations to bulletin/war spoils acquisition could almost be as important as the new Western Front Armies factions. It shows Relic is prepared to offer continued support to a sequel which wasn’t exactly welcomed by seasoned Company of Heroes players on release. In conjunction with the previously released Steam Workshop-compatible map editor and persistent rumours of wider mod support to come, the Company of Heroes 2 multiplayer community could soon have the tools and options it needs to really sustain itself.

Screenshots of the new US and Oberkommando West Commanders added by Western Front Armies can be viewed in the gallery below. Click to enlarge. You can see some gameplay from the expansion in our IncGamers Plays presentation.

The Top 5 Potential Suspects for the Arkham Knight

By Steven Wong12 hours ago
News