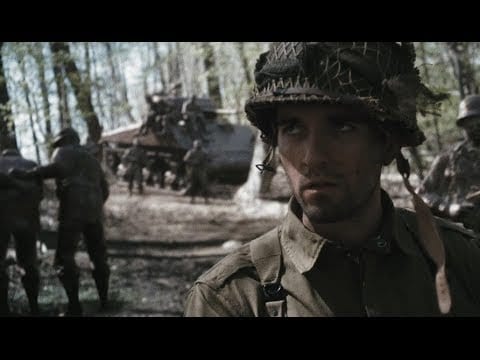 Company of Heroes 2: The Western Front Armies is out on Tuesday, which means it’s launch trailer time. Creepy, live-action launch trailer, in this case.

It mostly shows a chap walking through a load of bronzed soldiers and armoured vehicles while twinkly music plays, and… well, then things get a bit more warlike. I’m not sure it does a great deal to show off what Company of Heroes 2 is all about, but hey, it’s atmospheric.

The Western Front Armies is a stand-alone expansion for Company of Heroes 2 which adds in two new factions – the US Forces, and the German Oberkommando West. Each has their own infantry, team weapons, vehicles, abilities, and upgrades, and they’ll be fighting it out on eight new seasonal maps set around the Western Front. There’s also an “extended progression system that introduces other unique content into the game”, but I don’t really know what that means.

As mentioned above, it’s stand-alone, so you can pick it up and play it even if you don’t have Company of Heroes 2. It’s due out on 24 June for the price of £14.99, and we’ll likely be taking a look at it sometime around then.