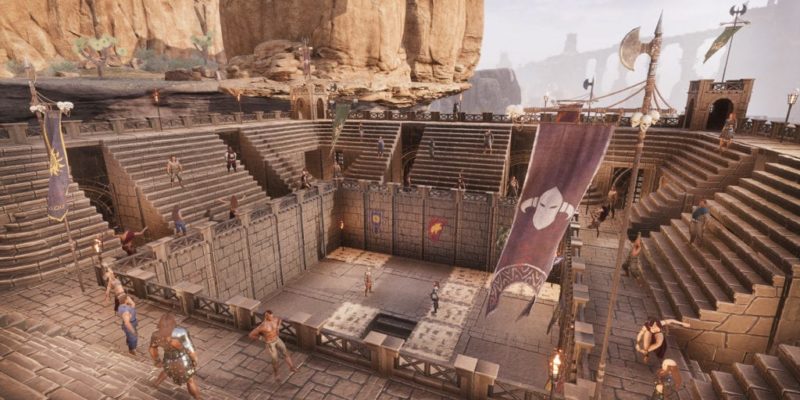 Conan Exiles launched out of Early Access in May last year, and it’s become a fairly popular MMO since then. There have been quite a few DLC packs since the final release, and today the latest one, Blood and Sand, is available for purchase. It introduces new weapons and armor, which the developer Funcom vaunts as exquisite and ferocious. The DLC also features new arena-building pieces to the Exiled Lands.

Along with the release of the DLC, Funcom is releasing a free update containing bug fixes, as well as new and improved PvP mechanics. It introduces the Battle Standard, which you can place to create PvP zones, allowing players to create massive arenas and fighting pits even on PvE servers. Participation in PvP on PvE servers will remain entirely optional, though.

Blood and Sand aims to accentuate the brutal life of the Exiled Lands with 29 new arena-building pieces for arenas and vaults. It also includes 15 new armor pieces in three sets, such as the Bear Shaman armor. The armor sets come in light, medium, and heavy sets. There are 19 new weapons in the Bloodletter set, as well as all new sets. And if you’re feeling decorative, there are 15 new war banner placeables for you to claim your territory in the Exiled Lands.

To be clear, none of this content gives any in-game advantage in power. All new items have comparable stats to existing items. You can find more information about Blood and Sand and the free update on the official blog. The Steam page for the DLC also shows some more information.

Conan Exiles is an open-world survival MMO set in the savage lands of Conan the Barbarian, based on the works of Robert E. Howard. For more information about the game, you can visit the official website.