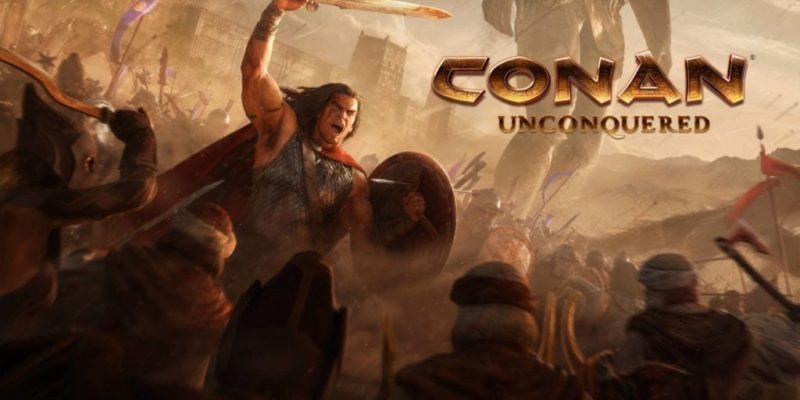 Conan Unconquered is not a reskinned They Are Billions, although you can be forgiven for the mistake. They do, after all, share what’s currently a very small genre: the survival RTS. One step removed from tower defense, this genre has you build up a base, research technologies, and build units (like an RTS) in an attempt to stave off increasingly difficult waves of attackers (like a survival mode in anything else).

Having now had a few hours of hands-on time with Conan Unconquered, I can pretty safely say that it’ll be very familiar to the hordes that have played They Are Billions – but it does have some unique twists to help it stand out. Perhaps the biggest of those is co-op, and game designer Renato Orellana was on hand to help me stand against Thugra Khotan’s terrible legions. Even with lag caused by intercontinental play.

Two Fools Who Laugh At Death 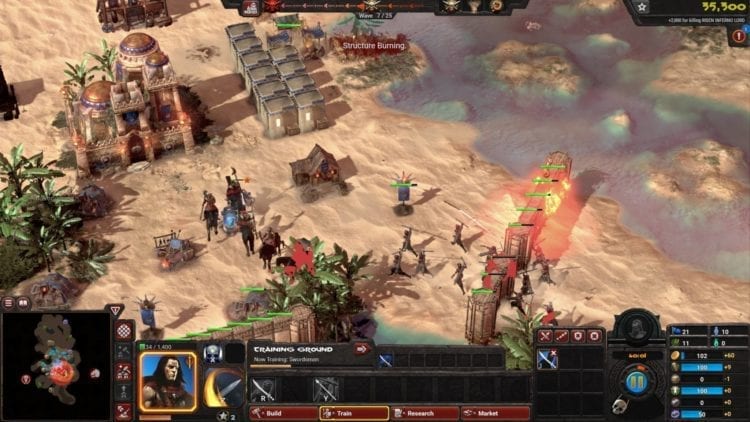 This is wave 7 of 25 – the standard length of a game. You can imagine how busy things are going to get towards the end.

As with many RTS games (and, yes, They Are Billions) you have a slew of resources to manage. In Conan Unconquered you’ve got six basic resources, ranging from the basics of gold and wood up to the fancy starmetal. In addition to this, you’ve got four “permanent” resources that don’t accumulate over time but only as you build structures – things like food and thralls. This should all be pretty familiar to They Are Billions players.

Co-op handles this in an interesting way. Here, each player has their own pool of resources to spend, but the income is drawn from both players’ buildings. If I build a hovel, then both I and my co-op partner get the gold and the thralls. You can even use some of the other player’s production buildings; while a research structure can only work on one project at a time, either player can finance or start the project. The major exceptions are the unit building facilities, and the units themselves. The vast, vast benefit of this? Simplicity. 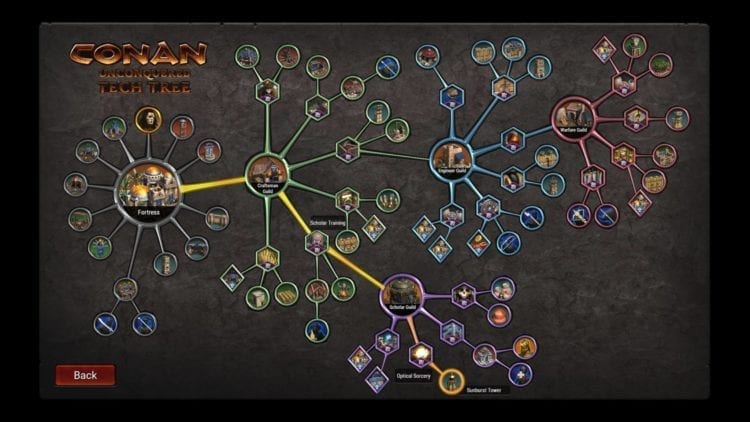 The in-game tech tree shows, at a glance, the exact construction and research path you need to take to get to a certain unit or structure. It’s a handy way of showing complex information in a really simple manner.

“The resource sharing was a challenging thing in the development process,” commented Orellana. “In previous versions of co-op, you had situations where you’d build a hovel and share the gold but not the thralls. Lots of structures would work that way, and we had too many exceptions to the rules. Now everything’s shared except for units – which is much easier to explain!”

To counteract this rather large advantage, co-op play means that the incoming hordes come in greater numbers and more directions. You can still pause to issue orders and construct buildings, of course, but – while I’m sure there’s still balancing to be done – based on my experience, co-op mode is not easy mode. That may also be because I’m terrible, mind.

Still, it does mean that people with different skills and mindsets can team up quite effectively. “When you’re playing co-op, one player can focus on the army while the other player can focus on getting the structures and the base set up, which is kind of nice,” said Orellana. We did not do this. We just died instead.

Conan The Conqueror! And Valeria, And Kalanthes

Orellana and I played two games, neither of which ended in success. In our defense, the second game ended because our session ended. The first, however, was because we were too busy fending off two attacks from two directions to deal with a third, probably because we were chatting about the game. By the time our battered forces reached it, they were too weak to properly defend the headquarters. Even Conan has off-days, apparently.

Each player chooses a hero at the start of the game, and this is another crucial difference from most other games of this ilk. The three in the game right now are Conan himself, Valeria, and Kalanthes, and all three will have an impact on how you play. Conan is a tough melee unit with wide swings, who can reduce five enemies to a messy smear with a single swing. Valeria is nimbler, with higher single-target damage, while Kalanthes is more of a support character. He’s no slouch in combat, though: his ranged magic attacks do splash damage. Should a hero die, they’ll respawn a minute later, so unless an attack is impending you don’t need to be too careful of them.

The Black Colossus In The Room 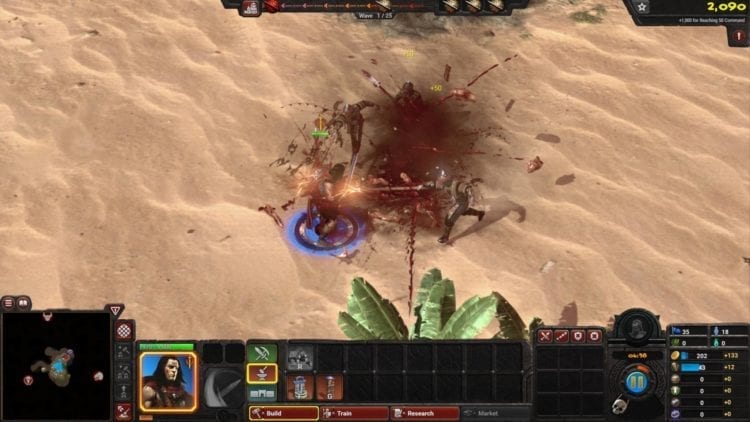 But still, there’s a big They Are Billions feeling about Conan Unconquered. Between building a training ground and having Conan slap a lumber-thieving bandit into the grave, I asked about this.

These comparisons aren’t something the team seems to fear. “Even from the beginning, They Are Billions was kind of an inspiration,” admits Orellana. “The original pitch of this was, I think, Dwarf Fortress and Stronghold. Then we played They Are Billions and Frostpunk and we knew we had to differentiate ourselves from those games.”

Compared to They Are Billions, the Conan Unconquered team were “shooting for more of an adventure atmosphere,” according to Orellana.

“Yes, you’re going to feel tense because your HQ’s going to go down, but having your units splatter other units on the map as they’re coming at you… that was always the appeal of the books and the comics and the movies. You just feel strong. We don’t want people to think this is just a straight lift.”

And it’s true. There’s a marked shift in how I actually went about playing Conan Unconquered compared to They Are Billions. In the latter, I focus a lot on walls, slowly edging farther out and building things up. In Conan Unconquered, your hero unit can usually deal with the first few waves alone, and walls are at best a suggestion in the early game. Sending your hero out to deal with roving packs of bandits and scorpions levels them up, so rather than carefully exploring and getting ready to take on packs of foes, you’re slaughtering most of what you come across to ready yourself for when the game gets mean.

There are even Guardians on the map – powerful bosses which drop useful relics. Each hero has an ability of their own, but those relics will give them extra powers, all of which come in handy during the regular sieges.

The Cost Of Death 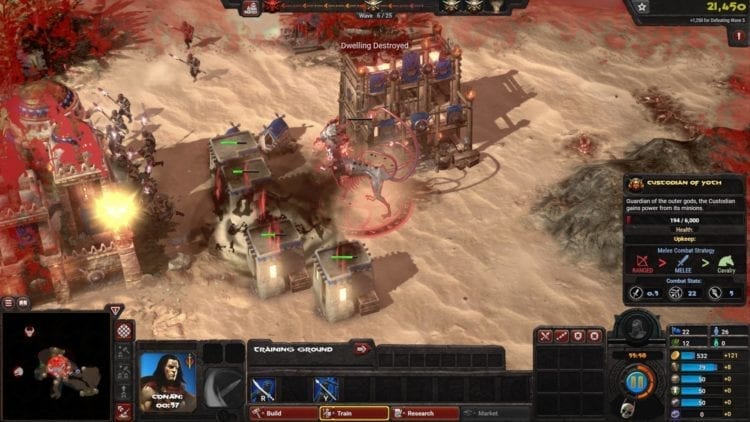 As a suggestion, don’t drag a Lovecraftian monstrosity of a Guardian to your base when you’re already under attack by a wave.

Going out in search of battle comes with dangers, though, and not just your units getting hurt or killed. Corpses are fodder for enemy necromancers, and too many stacked up can result in a cloud of miasma, which does very bad things to units passing through it. Picking fights near your base can result in the sort of choke points you really don’t want. And many enemies are outright attracted to some of these things, meaning you might find yourself under attack even between waves.

While you don’t have to deal with zombies infecting your houses and rapidly spreading (Thulsa) doom across your carefully crafted base, you do have to contend with fire. Enemies with flaming arrows or other means of starting fires are dicks; fire spreads rapidly across densely-packed buildings and ravages them. Fortunately, every unit acts as a firefighter and can lob sand at flaming structures to put them out. Watching Conan do this is mildly giggle-worthy by itself.

Better The Conan You Know

If you’ve played Age of Conan or Conan Exiles, then aesthetically, you should be right at home with Conan Unconquered. Thanks to Funcom, developer Petroglyph have access to a host of assets from those previous games, many of which have been rejigged or used as inspiration for Unconquered.

Of course, they’re not identical; isometric and top-down games have very different requirements than games with closer views. “Even though we got some of the models of the humans, we had to make sure that the swordsman and the javelineer read differently from far away – that their silhouette wasn’t lost in combat,” explained Orellana. “It’s frustrating when that’s not achieved. If you don’t know at a glance what a unit was, you feel bad because the game failed you at that point.”

“We took inspiration from the stuff that we received from Funcom, but we had to develop some of those structures ourselves because we had very specific needs,” he added.

Not Much Lamentation Here 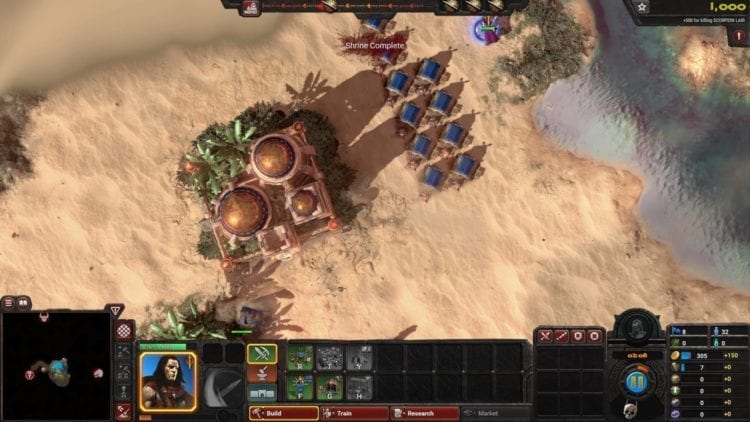 At the tap of a button, you can switch to a top-down view which is much better suited for placing structures.

There are plenty of other fun features, too. There’s a Feats system, with various tasks offering you permanent bonuses throughout your playthroughs (and yes, this can be disabled for the hardcore). You can link a seed to others, challenging them to beat your score on that exact map, and the game will automatically create a leaderboard for it. There’s the ability to summon an incarnation of Mitra should you get that far in the tech tree, plus all of the higher-tier units with their own abilities. There are rock-paper-scissors RTS mechanics and AI to supplement this, with enemy cavalry trying to circumvent your front lines to get at the squishy archers behind.

In short, there is rather a lot here. Conan Unconquered shares a lot of mechanics with surprise smash They Are Billions, but it differentiates itself in other ways: co-op, hero units, more aggression, and very different foes. 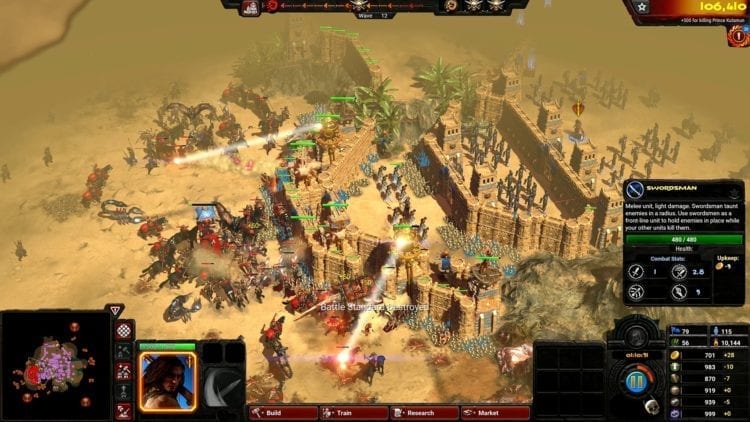 Not that I made it this far, but in case you were worried that late-game hordes wouldn’t be big enough, here’s a grab from a much earlier build of the game.

That doesn’t mean it’s better, necessarily. Conan Unconquered will have no campaign – just a set of scenarios structured to teach you the basics – so They Are Billions will have the edge in other ways. My point is more that, based on a few hours of play, it looks like Conan Unconquered will be able to sit alongside They Are Billions. I’m looking forward to sinking more time into it when it launches on 30 May.