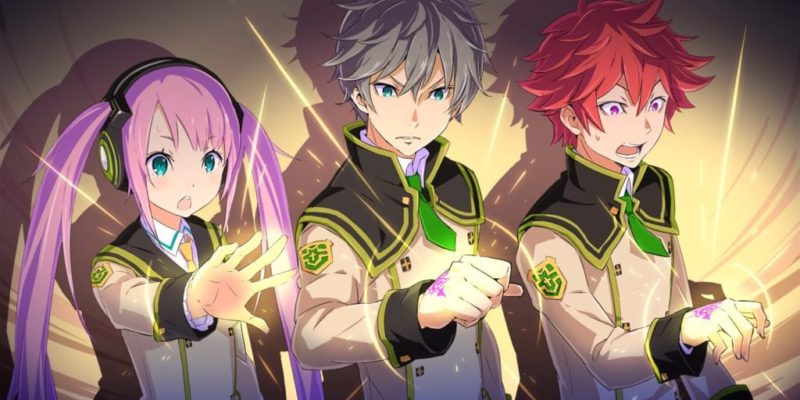 Conception 2 is not a JRPG about sex. Honest. Yes, okay, you have to create bonds with female classmates and then do a ritual in which a man and a woman are joined, and ether is poured into a magical star womb, and magic star babies come out, and there’s a lot of embarrassment around this, and everyone makes innuendos about it, and the “joining” cutscene has silhouetted naked people, and…

… okay, fine, it’s basically about sex. But with Matryoshka dolls and Ether filling up Star Wombs. 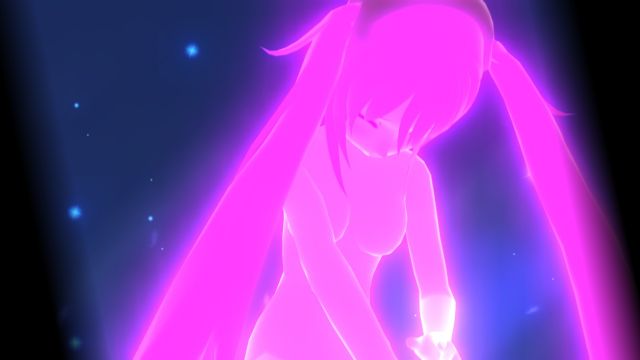 Really freaky neon sex that’s more about holding hands than anything else. This screenshot is about as explicit as it gets, for what it’s worth, and actually makes it look more explicit than it really is.

Conception 2 is a really weird JRPG, and it’s one that I didn’t play much when I first saw it pop up on the Vita. In a lot of ways it really, desperately wants to be Persona 3 – a limited amount of “free time”, social events to rank up your bond with teammates, with those bonds informing the power of the monsters you fight alongside, and battles taking place in procedurally-generated dungeons – but it isn’t. It’s a little too bland and vanilla for that; it doesn’t have the characters, the balance, the brutality, the horror, the wit, the… well, look, it’s not Persona.

(While we’re at it: for fuck’s sake, Atlus, give us the Persona games on PC. If Sony are there and they have a gun to your head about this, send out a Tweet with the word “raspberry”.)

On the other hand, saying “it’s not as good as what is probably the single best and most consistently solid JRPG series in the world right now” isn’t really much of a complaint. So let’s stop talking about that and start talking about the PC port. 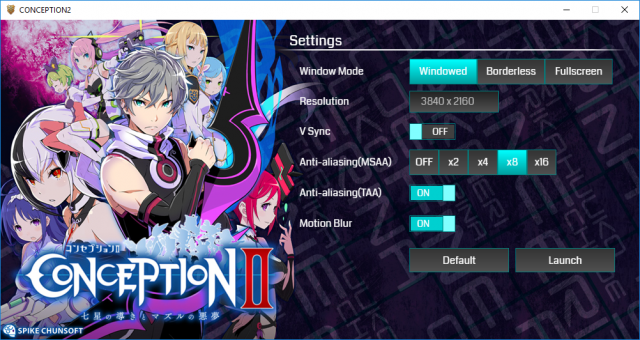 Not the most in-depth of things, is it? Slightly more bizarre is that the Resolution button you see there is actually completely greyed out unless you select Fullscreen mode. That’s understandable for Borderless – I mean, that just matches your desktop resolution – but Windowed is set to the Vita’s native resolution of 960×544, and as far as I can tell, there’s no way to change that. Not a big issue unless your default desktop resolution is absolutely massive (or you feel that 960×544 is just too damn small, which is understandable) but it’s still a weird oversight. At least there’s Borderless if you need to constantly Alt-Tab.

Also, I’m happy to state that Windowed mode properly locks the cursor to the window, so you won’t keep moving the mouse out of it and accidentally starting up an internet browser or something.

I’m also happy to say that, for the most part, it looks pretty good when upscaled to 1920×1080. Drawn elements like the city map can be a little blocky and pixel-y, but the actual 3D dungeons and characters are sharp and well-defined. Conception 2 doesn’t necessarily make the best use of screen space, though – its pop-up boxes are rescaled to take up the exact same amount of space as they would on a 960×544 screen – so things can feel a little unnecessarily cluttered. Nonetheless, I don’t have much in the way of complaints, graphically. 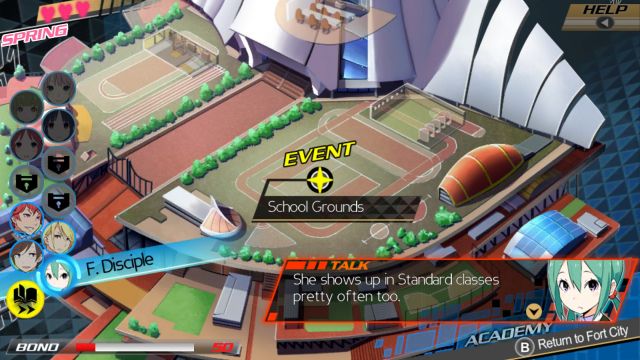 This pretty much shows it at its worst, in terms of the cluttered pop-ups and the pixel-y art. Although it does look quite nice in thumbnail form!

Oh, and it all runs at 60FPS. I believe the animated cutscenes are still running at 30, but as per usual, that’s not much of a surprise. I wasn’t expecting them to be completely redone for a PC port.

For what it’s worth, here are the in-game options: 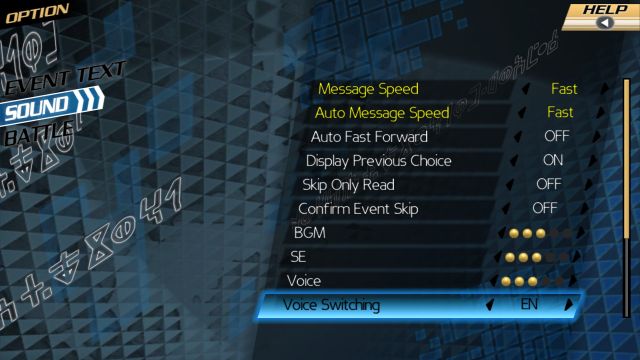 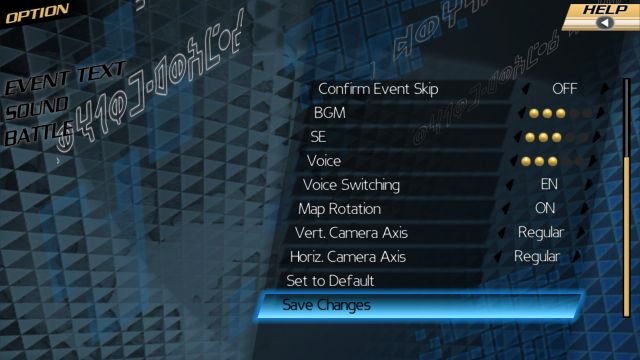 Again, not too much of note. I’m pleased by the option to invert the camera and the ability to change the voices from English to Japanese, although the latter has a bit of an issue – namely, that the animated cutscenes have no subtitles. Everything else does! The flashy cutscenes do not. As such, unless I’ve missed a way to enable subtitles in those (which is possible), they’re going to be completely unintelligible if you set the language to Japanese, unless you actually speak Japanese. Which might make that option a bit pointless if you want to follow the story, depending on how many of those things there are.

The final thing we need to examine are the controls, and rating them on a scale of one to ten, they get a firm “uhh…” 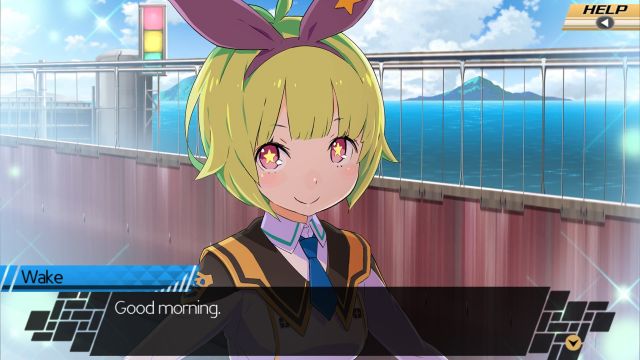 What the FUCK is wrong with your eyes?

Firstly, the game commits the cardinal sin of every single goddamn on-screen keymap being a controller button, even with no controller plugged in; thank you for telling me that the Y button does something, but it’s actually Left Ctrl. On the flipside, you can basically hit F1 at any time whatsoever to get the actual mouse/keyboard controls for all of the keys that are currently relevant, so you’re not really left guessing.

Secondly, the game commits the cardinal sin of not letting you rebind controls (although, as with the subtitles thing above, this may be an option of missed). On the flipside, the default controls are designed for people with the standard number of hands, and are actually based around the mouse and keyboard. WASD moves you around. The mouse rotates the camera. Left click accepts options, and right click cancels. Most of the other buttons you need are bound near your left hand – Q, E, Z, CTRL, and so on. It’s inelegant, but definitely playable. You can even forget entirely about the mouse if you want to, using Q and E to rotate the camera, and Enter and Backspace as your accept/cancel buttons. 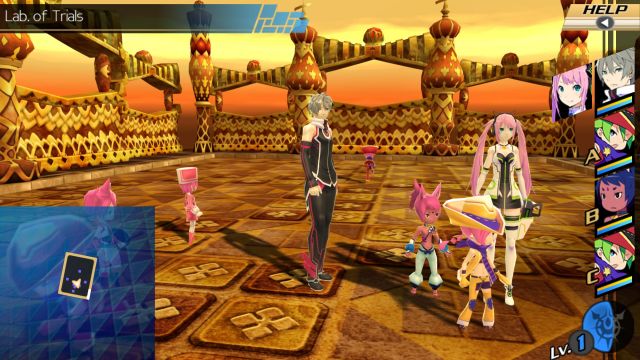 Again, a bit cluttered, but it looks nice enough in 1920×1080. (The minimap can be toggled to the centre of the screen or turned off by tapping a button, incidentally.)

Third, it commits the cardinal sin of forcing you to use an on-screen keyboard to type in a name instead of using your real keyboard. This has only come up once, though, so… well…

If there is one oddity, it’s that – while Conception 2 understands the mouse exists, lets you control the camera with it, and even lets you invert it – it does not use the mouse for menus. At least, not in the way that you’d think. You don’t simply click on the button you want to press; you cycle through the options either using WASD like you would a D-pad, or by scrolling the mouse wheel. Like I said: perfectly functional, but really rather wonky.

My impressions of this port are definitely on the more positive side, though. It looks nice enough, it runs at 60FPS, it has bugger all in the way of loading times, and it has mouse and keyboard controls that seem to have had at least a little thought put into them. I suspect that gamepad is still definitely the way to go, but being a turn-based JRPG, the occasional tap of F1 to check the controls isn’t really a deal-breaker. (Note that the game never actually told me that F1 did this; I just guessed on a hunch.) 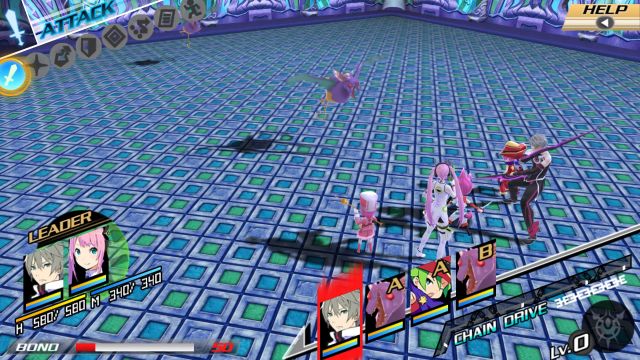 Combat relies a lot on positioning your team around the enemies to focus on weak spots or build up your Chain Drive, but thanks to copious amounts of motion blur, most of the screenshots I have look like shit.

I’m less sold on the game itself, but I haven’t put nearly enough time into either the PC version or the Vita version to make any sort of full declaration.

It is, in essence, a dungeon crawler. You and your assembled team of Star Children (the weird baby monster things you create via Definitely Not Sex with a female classmate) head into dungeons, run into (visible) monsters to start fights, play with positioning to either hit their weak spots or build up a meter that lets you preempt their turn, level up, and then return to base for some socialising. You buy better gear, take part in social events, make some more baby monster things, and repeat. 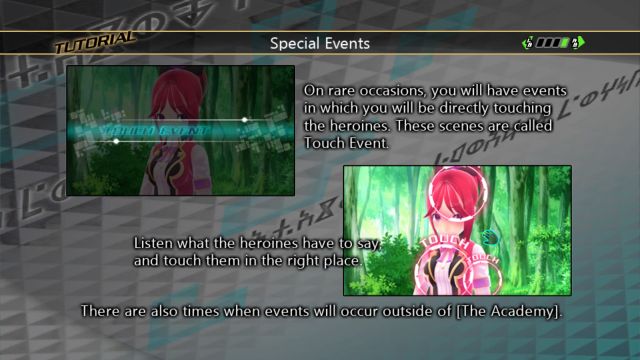 Where it fell apart for me on the Vita was in its writing and repetition. Unlike Persona, it doesn’t have great characters and an intriguing plot buoying it along, instead largely relying on pervy old men and large-chested girls. This may well change later on, of course. And again, considering I’ve played plenty of games like this, I’m not too excited about the prospect of going into more random dungeons to fight monsters, and then socialise with characters I don’t really give a toss about.

That said, I think I’ll stick this one out for a bit longer. It seems like the sort of thing I might just enjoy idling away with while I’m half-watching something on Netflix, and perhaps the difficulty and characterisation will ramp up enough in five or six hours to make the tactical possibilities a little bit more delicious. I didn’t play Conception 2 much on the Vita, but at the current PC price of £10, I’m more inclined to think it’s worth a punt than I did when I tried it out on handheld for £30. 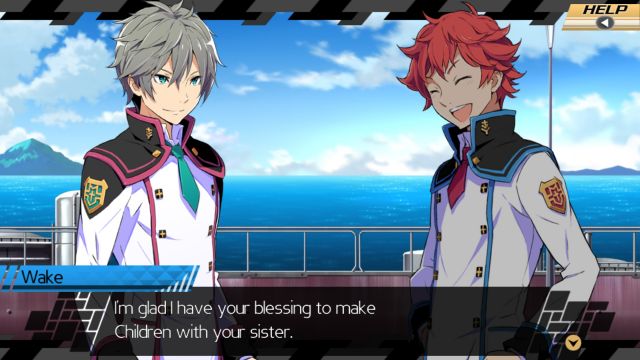 Aaaand one last screenshot because most of the pics I took of this game are utterly hilarious when taken out of context.

Call of Duty: Infinite Warfare has an 80s zombie mode

By Blake Grundman21 hours ago
Reviews