We’re celebrating 10 years of Star Trek Online with a massive key giveaway, as well as holding a contest to give out special STO Anniversary Badges!

Have you been playing Star Trek Online for its entire 10-year existence? That’s crazy! I can’t imagine doing anything for ten years. Maybe not even ten minutes. I have a very, very low attention span.

Whether you’ve been along for the full ride, are new, or somewhere in between, you’ll love today’s contest. To celebrate the release of the Legacy content in conjunction with ten years of space exploration, we’re giving away a ton of content for the game, featuring an actual Star Trek Online Anniversary Badge. That you can wear. Like, everywhere. So come win it!

Star Trek Online: Legacy hit the digital space today, adding more content to an already packed game. Along with new ships and other content, the new expansion adds Seven, as portrayed by Jeri Ryan from Picard, and Michael Burnham, as portrayed by Sonequa Martin-Green in Discovery, to the mix. These new characters add new missions and scenarios to the game to bridge the old and new into this now decade-spanning adventure.

Ok, we’ve got a lot going on here, so scope out what we’re giving away! 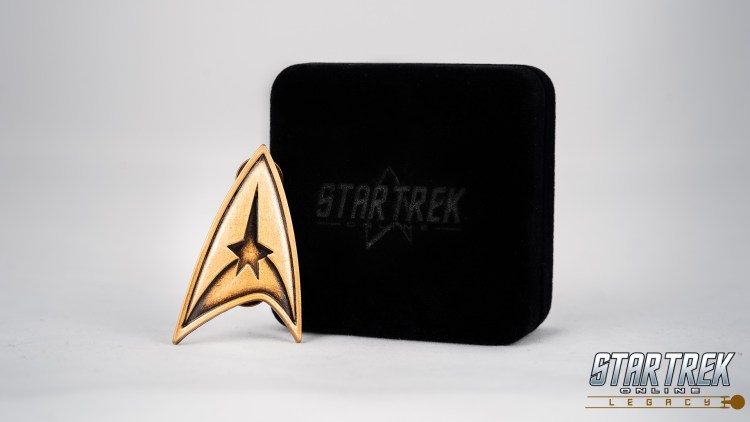 Three Grand Prize winners will receive this special Star Trek Online Anniversary Badge, shown above. Wear it to the dentist, or to the mall, or maybe to space itself — just wear it! Winners will also receive the Federation Fleet Admiral Faction Pack, which includes:

50 runners-up will receive the T6 Europa-Class Heavy Battlecruiser. Read about it below because I’m confused!

The Europa-class Heavy Battlecruiser is well-suited to the frontiers of the Federation, whether the mission is one of exploration or defense efforts. It is named after the U.S.S. Europa — a Nimitz-class vessel lost at the infamous “Battle at the Binary Stars” under the command of Admiral Brett Anderson in 2256. This modern 25th-century counterpart to that ill-fated flagship of yesteryear has been fully outfitted with the latest in team support capabilities, and a substantial array of versatile armaments.

Enter to win using the widget just below. Keep in mind you must have a United States shipping address in order to win, and all keys are for the PC version of STO, only. I’ll draw winners on Wednesday, February 19.

While you’re waiting, we’ve got a bonus — we’re giving away totally free content! We’ve got 500 keys to give away for the Federation Elite Starter Pack, giving players access to:

Simply redeem a key from the other widget below to take one of these bad boys. Grab it fast — once they’re gone, they’re gone!

Details on another canceled Aliens game emerge from 3D Realms