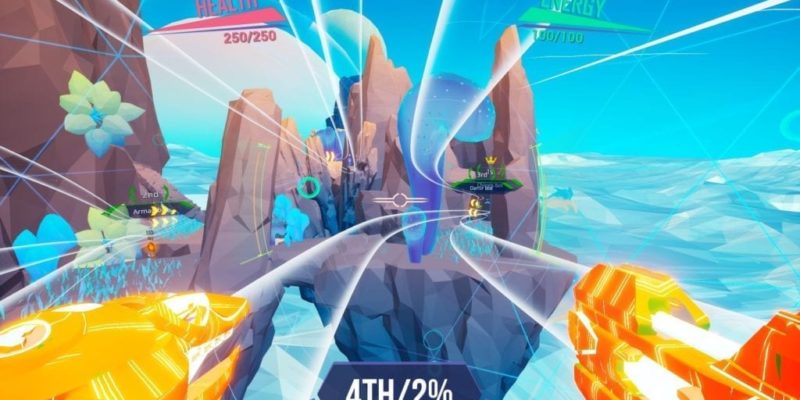 Rev up your engines for today’s contest, and enter to win a Steam key for JetX!

Come enter our contest for a chance to win a Steam copy of arena shooter/racer JetX!

Developer Singularity Lab put a lot of hard work into this one, so I’ll let them tell you about it!

One of the main features of JetX is the many different game modes, giving players the freedom to play the game in the way that they find most enjoyable. Whether they simply want to race, take part in an arena shooter, fight against PvE bosses, or take on all of the challenges at once, the choice is theirs to make!

If you have already heard of JetX, it is time for you to immerse yourself in the world of cosmic speed and battles, pumped full of adrenaline, and learn why we gave the game long descriptive titles such as “racing shooter battle arena in zero gravity.”

I don’t think I’ve ever heard of boss fights in an arena fighter/racer/shooter, but man, here we are. Sounds pretty cool!

To enter to win, use the widget below to leave your name and email address. You can enter daily for additional chances. For bonus entries, follow PCI on Twitter and share our contest post with your friends!

While you’re waiting, comment below telling us what the hell kind of boss there’d be in a combat racing game like this. I can’t stop imagining that kickass battle tank thing from Fury Road with the guitar dude wailing away on it. That’d be pretty rad.

We have ten Steam keys to give away. Winners will be drawn on Wednesday, April 17.

JetX is available now on Steam.

Yakuza Kiwami 2 Confirmed For PC Release In May