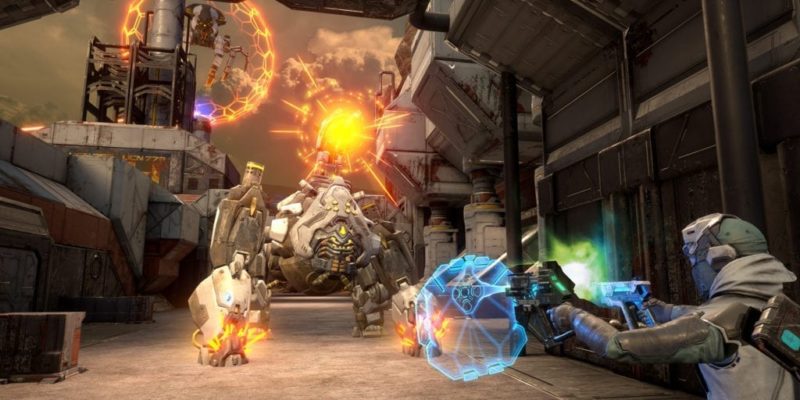 Enter this contest for your chance to win a Steam copy of VR shooter Evasion.

In this contest, the prize is virtually free. Win a Steam key for VR game Evasion.

I gotta admit, I wasn’t entirely sold on the whole VR thing until I got a rig myself. It definitely takes a bit of getting used to, but man, the different kinds of stuff you can do in VR is really cool.

Got a VR set of your own? If so, enter to win a Steam key for VR sci-fi shooter Evasion.

Powered by Unreal Engine 4 and featuring stunning sci-fi visuals, Evasion has been designed from the ground up to give players smooth locomotion while still delivering fierce “bullet hell” action. Evasion has both solo and co-op experiences, and features a story campaign where players have to save an embattled mining colony from a surprise attack by the lethal Optera, as well as a survival mode designed to challenge even the most hardened FPS veteran.

Players take on the role of the Vanguard, an elite special ops team that has four playable classes: the devastating Striker, indispensable Surgeon, versatile Engineer and unstoppable Warden. Each class has its own unique full-bodied avatar, weapons, unique tether abilities and devastating Surge Attacks.

A VR bullet hell game sounds hectic and chaotic and a bit crazy. So, why not check Evasion out?

To enter for your chance to win, use the widget below to drop your name and email address. Then, feel free to share PC Invasion with your friends and follow us on Twitter. For every new follower we get, they give me two minutes of recess. I want to run around and play, so please help me out here.

We have 10 Steam keys to give out. Winners will be drawn on Wednesday, November 7.

Evasion is available now for Oculus Rift, HTC Vive, and PSVR. Head over to Destructoid for more chances to win.

Should Fans Be Angry Over Diablo: Immortal?