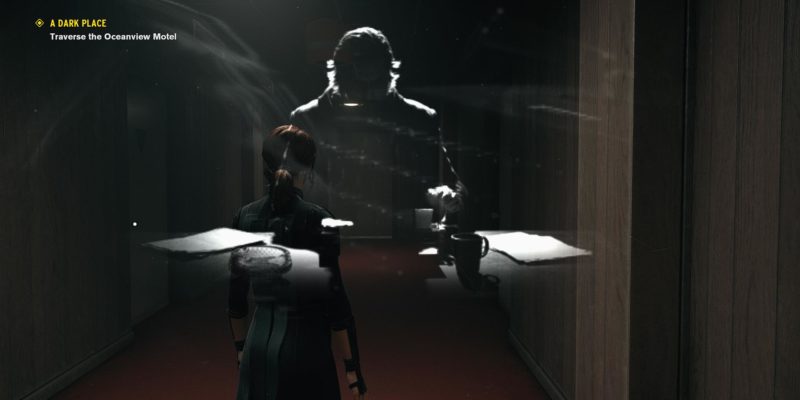 Control is one of my favorite games in recent years. I love the story, level design, and gameplay. Some reviewers were hard on the first DLC, The Foundation, but I rather enjoyed it and thought it added a neat bow to the game’s narrative. When it was announced that Control: AWE would feature a crossover with Alan Wake, I was very excited to see what would be done to add dimension to both game worlds as they mixed together. Unfortunately, this DLC is not only disappointing, but it feels slapped together out of the main game’s parts with much of the crossover material being underwhelming or closer to a teaser for what’s to come.

To put it bluntly, don’t play this expecting to see much of Alan or learn anything new about his predicament. While you see a fair amount of him during the first hour or so of Control: AWE, he mostly vanishes for the rest of the DLC’s four-hour story. What we get instead of the enlightening crossover I expected, is a character from Alan Wake running around a section of the FBC, who Jesse has to subdue. The notes and audiotapes you find around the place are as well-written and as interesting as ever, but the story aspects are a letdown when compared to the last DLC. 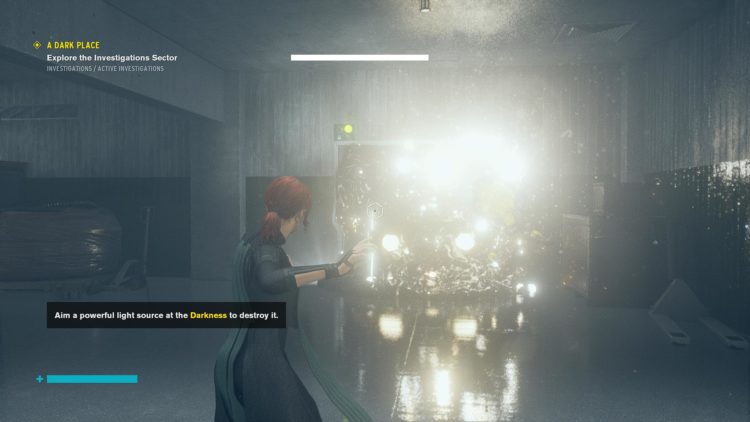 In case you want a bit more detail, AWE begins with Alan Wake getting Jesse’s attention via The Hotline. The Investigations sector of the FBC is now open and ripe for exploration. Jesse takes the sector elevator down to it, only to find that it was sealed for a good reason. Dr. Emil Hartman, the proprietor of Alan Wake‘s Lodge, was brought in and held in Investigations. Only, he was tainted by The Dark Place. When The Hiss forced their way into the FBC, they got to him and left him a conduit for both darkness and resonance. He’s tearing the place up and he has to be stopped. It’s kind of lame.

The vast majority of the time spent in the Control: AWE DLC feels identical to the main game. While The Foundation had some unique areas and events, almost everything here is something you’ve seen the main game do many times. Furthermore, there are very few memorable locations. The Investigations sector feels like it’s stitched together from leftover assets. As such, it has no personality of its own. Certain areas are literally copied and pasted from other sectors. Remember the turntable outside of where you fought Dr. Tomassi in the main game? There are two instances of that room in this DLC. A maintenance tunnel or two also appear to be ripped wholesale from the base game.

If you played most of these sections out of context, you’d probably assume you were just playing the main game. There is new stuff, though. One of the most surprising additions is that Jesse’s service weapon gets a new form. Unfortunately, it’s not all that different from what you’re used to. It’s called the Surge form, and it functions very similarly to the Charge form. However, where that form could be charged up for larger explosions and the sticky bombs detonated on a timer, Surge shots must be detonated manually. This does allow for a different strategy, but it’s so close that I simply couldn’t find much reason to use it. 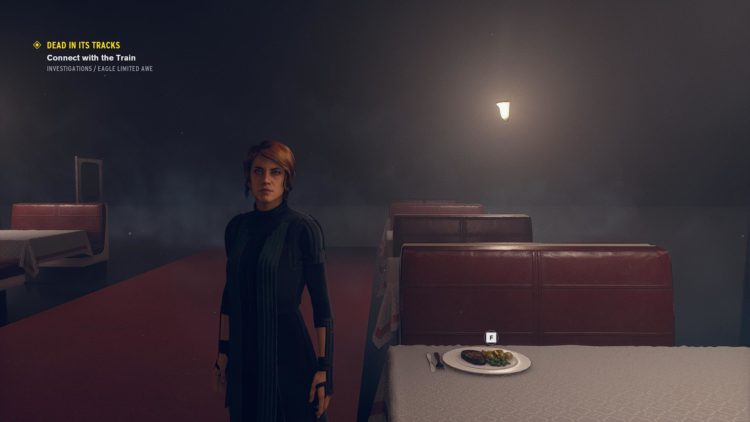 Then there are the gameplay additions. There’s darkness to worry about now. But this only manifests in a couple of ways. Either there’s some shadow gunk on a door or generator, or an entire area is dark. Gunk can be removed by shining a light on it. Jesse can pick up a single new light object and point it at these spots. The gunk reacts much like shining light on enemies in Alan Wake. The dark areas, on the other hand, only make it hard to see and drain Jesse’s energy as long as she’s in them. Her energy can’t refill while within these areas either, so you’ll need to get back into the light.

It had to be you

These dark areas are really the only thing that AWE has to differentiate itself. Unfortunately, they’re almost exclusively used in sections where you’re chasing Hartman and using power cubes on generators in order to turn the lights on. These sections are repetitive and tedious and I didn’t enjoy them at all. You typically go into the dark, grab a cube, do your best to put it on a generator slot, and then get back to the light before your energy runs out. It’s simple but occasionally frustrating. One has you destroying Hiss nodes in order to access the power cubes, which can result in enemies shooting you in the back in the dark.

Sadly, the real insult is the Control: AWE boss fight. I think Control typically did boss fights poorly, as I found them to be cheap and overly reliant on spawning enemy waves. The DLC makes sure to do that, but pairs it with my least favorite boss trope in gaming – a boss that heals itself at regular intervals. It’s a truly miserable experience that is possibly the worst boss fight yet, which is saying something. 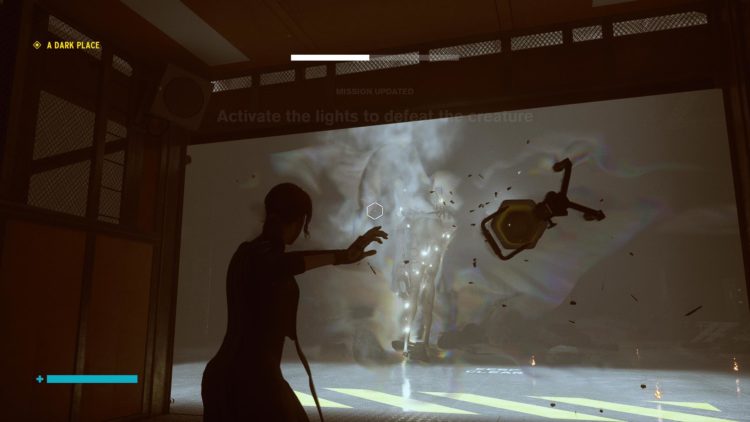 While the main story alone will take about four hours, there are new side quests as well. However, I’m of the opinion that the Control: AWE side quests are weaker than those in The Foundation. Most of them just task Jesse with hunting around to do a few bits of busywork in specified areas. Ahti has three more janitorial jobs for you, two of which are extremely similar to his main game tasks. Just like the rest of the DLC, the side quests are simply lazy. For whatever reason, completing side quests didn’t give me ability points this time around either. I’d imagine this is a bug, but if it isn’t, it means it’s not possible to 100% complete the skill tree.

If I’m making AWE sound awful, be assured that it isn’t. Control is still a great game, but this DLC adds practically nothing of value to it outside of some interesting lore and the simple pleasures of seeing Alan again. This DLC launches alongside a patch that adds new difficulty assist options that are basically cheats. There’s a new ability too, although I’m not sure if it’s DLC only or for everybody.

The new ability is the best thing that’s been added, as it allows Jesse to pick up two more objects with her telekinesis. They’re all thrown at the same time, so they can significantly increase the efficacy of an already overpowered ability. I think there’s a new enemy too, but it’s just a flying guy with a machine gun instead of telekinesis. Don’t quote me on that, though, as I might simply be forgetting about having seen them in the base game. There’s also some arcade modes and a feature that allows players to fight certain bosses again (and the Ashtray Maze!). Overall, it’ll take most players around six hours to 100% the expansion.

The Control: AWE DLC is far from bad, but it’s about as lazy of an expansion as the game could get. It adds very little that you didn’t see nearly verbatim in the main game, and it squanders its storytelling possibilities. Fans of the game will still find it worth playing, but they should keep their expectations in check. The DLC’s offerings are easily skippable for the most part. 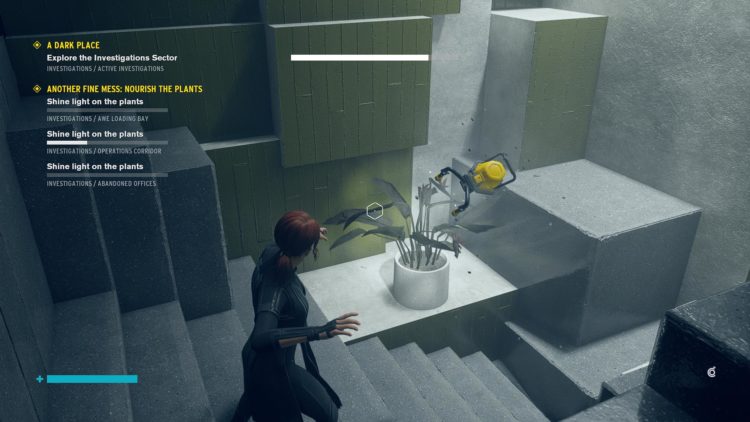 AWE had a lot of potential and I'm sad to say that it's mostly wasted here. Most of what it offers is exactly the same as what players have experienced before and I found the new stuff to be equal parts obnoxious and tedious.

By Jason Rodriguez16 hours ago
Reviews