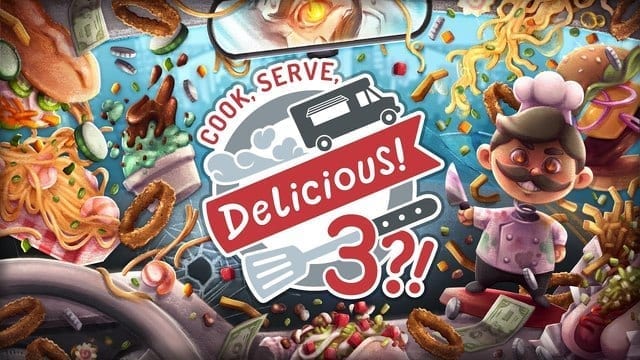 In Cook Serve Delicious 3, you will hit the road, traveling across a war-torn America in the year 2042. Your destination is the Iron Cook National Food Truck Championships, where you and your trusty robots Whisk and Cleaver will cook your way to victory. It’s an all-new story-driven campaign with hundreds of dishes, many of which are new to the series. There will also be hundreds of levels in a new gameplay structure completely redesigned for a fast-paced action experience. However, you can also choose to take it easy with a Zen Campaign mode, which you can toggle on or off at any time.

As with previous entries in the series, you’ll be able to play Cook Serve Delicious 3 in single-player and local co-op. You can also switch between the two modes on the fly if you so choose. You’ll get to upgrade your food truck with dozens of new modules that will affect gameplay. Since you’ll be cooking on-the-go, it will also feature a more dynamic experience as you reach stops to feed the hungry in a near post-apocalyptic world. Along the journey to the new capital of the U.S.A. in Nashville, Tennessee, you’ll improve your skills before you take part in the Iron Cook National Food Truck Championships.

Vertigo Gaming will demo Cook Serve Delicious 3 at PAX West 2019 later this month. You can follow the game and the developer on Instagram, Twitter, and Discord for more details, as well as check the official website.

Cook, Serve, Delicious! 3?! will release in late 2020 for PC, Nintendo Switch, PlayStation 4, and Xbox One. You can already wishlist the game on Steam.