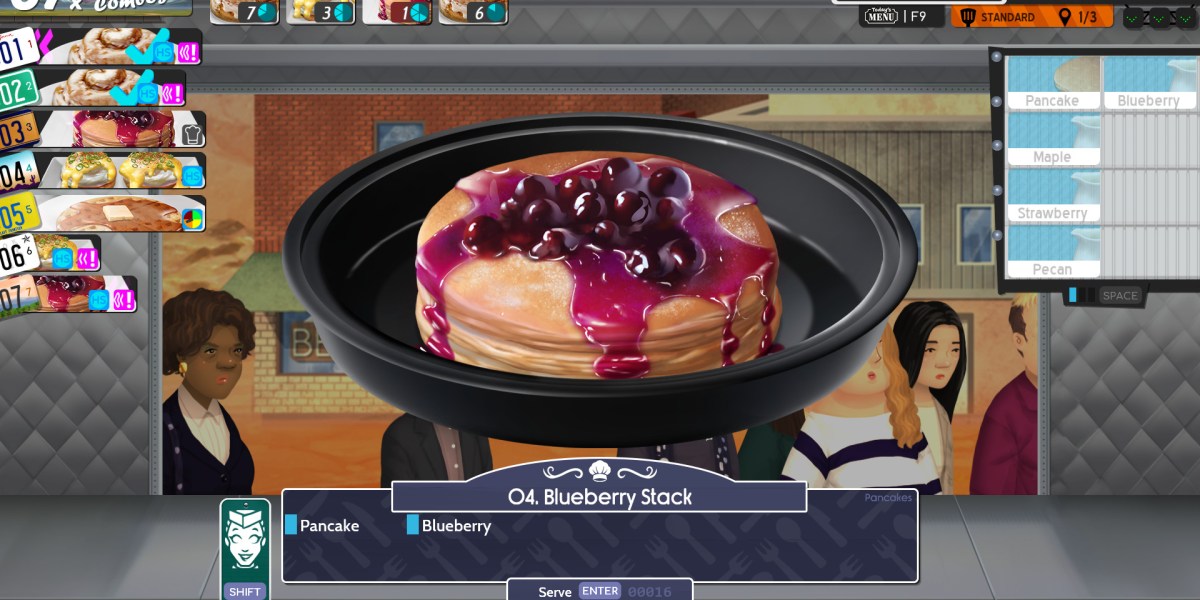 Many moons ago I spent my youth working in a restaurant. Over the years I worked basically every position, from server to bartender, to cook, to manager. While all that is a hazy memory now, nothing brings the dread of working a lunch rush back quite like having to fill all those roles at once while playing Cook, Serve, Delicious 3. But much like those who seek out dangerous activities like car racing or extreme sports through the comfort of the digital lens, CSD3 channels that stress into an addicting little dish.

Fair warning, I’m going to be harsh in some of my critiques in this review, but it’s only because I enjoy this game so much that some flaws really spoil the fun.

I went through the gameplay of Cook, Serve, Delicious 3 pretty extensively when I previewed the game back in February, so I won’t rehash that here. Sufficed to say the core loop of clicking on the correct ingredients at the right time hasn’t changed much since the first game. And that core loop is incredibly fun, satisfying, and almost relaxing once you’ve found your groove. The hectic nature of managing several orders at the same time is both challenging, and at times overwhelming. It is simultaneously enjoyable when you are in the zone, and utterly crushing when you miss. 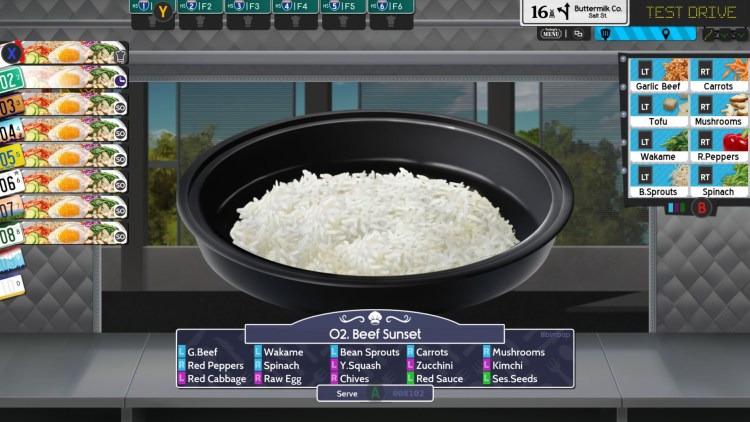 One wrong click anywhere along the line throws out your whole run.

I’m not exaggerating when I say that CSD3 has brought out stronger emotional responses in me than any other game this year. Each mistake can be extremely costly on the three-level grading system used in the game. Just one measly mistake is the difference between hitting a gold medal and being dumped down to silver.

In the middle of a rush, messing up would force me through all five stages of grief in a single instant before restarting in a vain attempt at perfection. After all, what kind of hack cook couldn’t see that last customer didn’t want tomatoes in their salad?! But making a mistake is all too easy and is entirely irreversible.

Herein lies my biggest complaints with the game. There are mechanics at play that push the difficulty from ‘challenging’ to what I would call ‘bullshit.’ The primary offender has to do with cooking timers. At face value, these timers give you a bit of breathing room before having to take the next step on a dish. For example, if you’re cooking a chicken fried steak, you have to cook the chicken in oil. After a certain amount of time, you can then move on to plating the chicken and smothering it with gravy.

Easy enough, though the controls are fairly cramped. Since the entire order queue is controlled with the X button on a controller, it is all too easy, especially in the midst of a rush of orders, to accidentally press X on an order that is still cooking. This instantly demotes the dish from being successful, robbing you of your gold medal run.

In video game terms, it seems fine. I pressed the button too early and deserve a penalty. But within the context of the game, it’s like pulling a pan off of the fire and deciding that it is impossible to put it back on. That isn’t challenging; just frustrating. The same could be said of adding an extra ingredient to a dish. One wrong press and you’ve thrown your whole run away. I’m not saying that I should be able to make mistakes without consequence, but the challenge is time management. At least let me scrap the dish and try to re-make it against the running clock of the customer’s patience. 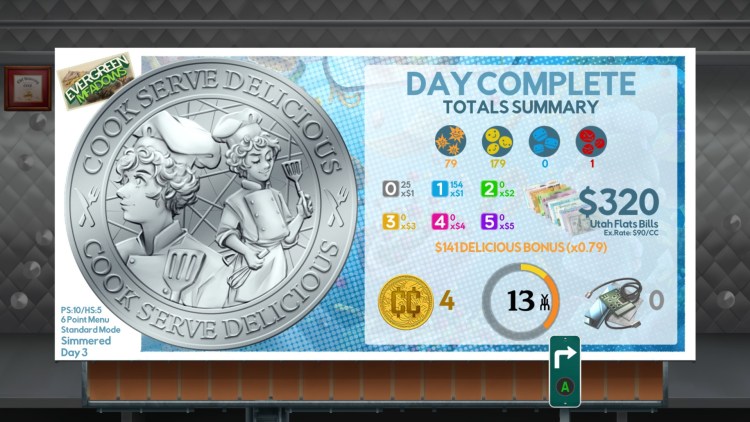 One mistake is enough to essentially fail a run.

Pulling undercooked food is all the more frustrating because the game already has safeguards in other places to prevent similar mistakes. Several recipes will lockout button presses for previous steps as you advance through them, preventing you from ruining a dish through a misclick. Why not extend the same courtesy to an error that doesn’t even make sense in the context of the game? The challenge should rightly be coming from how you manage your time and order queue, not from being forced to send out dishes that any sensible cook would scrap.

The UI can be its own issue. Some recipes have three pages of ingredients, which can create an artificial challenge. For example, if you’re working at a place with a dozen different drink flavors, you wouldn’t have to memorize which page and side you’d need to be on to serve any particular flavor. But in the game, scrolling through the cramped recipe book just makes items that wouldn’t be difficult in real life hard for the sake of being hard.

Meanwhile, real-life cooking challenges like food waste are completely absent. You can always overprepare food and just throw it out at the end of the run without hurting your profits. Punishing you for making excess food seems like a much more context-friendly way to inject an extra layer of strategy, timing, and challenge.

Cook, Serve, Delicious 3 is fantastic both in terms of visuals and audio. The art style is delightful with exaggerated, caricature-like depictions of your customers and delicious-looking food. The music is light-hearted and at times frantic, which perfectly complements each current moment. Both are made even better contrasted against the absurdity of the game’s story of being in a roving food truck during the apocalypse. Much of the UI is clever and fun. Even the options menu is laid out like a roadside sign. Thematically, it’s all about as good as it can be. This is fun. I refuse to hear otherwise.

There is a massive difficulty spike right around the third territory. CSD 3 demands higher and higher point menus. The dishes you need to cook require more and more steps with multiple variations keeping you on your toes. And the final level needing an astounding 20 gold medals, out of 27 possible, to unlock. And let me remind you, a single mistake takes the gold off the table.

Steam’s achievement statistics show that only about 13% of players made it past this point. I doubt any other than the most dedicated will see the end of the road. And, much like most cooks in real life, those who stick it out could best be described as masochists. But don’t get me wrong. I’ll likely keep plugging away at CSD 3. All the criticism I’ve levied at this game is because I enjoy it so much. This is by far the best entry in the series. The flaws stand out so much because of how strong the overall package is. I only wish it was tightened up even more. If you can stand the heat, Cook, Serve, Delicious 3 is out now. 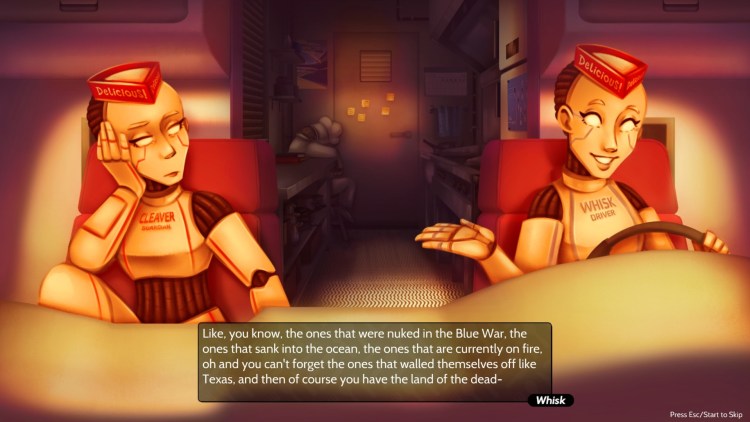 This was funnier a year ago…

Cook Serve Delicious 3 is a stressful, yet at times relaxing, cooking game. It is so close to being perfect that I can't wait to see what the next iteration brings