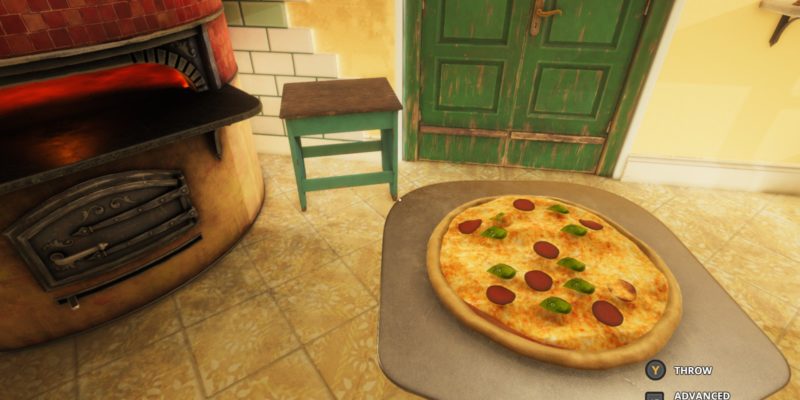 Cooking Simulator is back with yet another specialty expansion. Following hot on the heels of its baking DLC, Cooking Simulator – Pizza provides franchise fans with the ability to run their own pizzeria. It’s another substantial expansion that adds a host of new mechanics and an all-new location. Not only that but, much like the previous expansions, it has its own progression systems as well. But the question stands: is it worth it?

Personally, I’ve been looking forward to this expansion for some time. I love games about making pizza and Cooking Simulator is easily the most complicated, realistic cooking game available anywhere. Suffice to say, I don’t think Cooking Simulator – Pizza disappoints. Once you boot the game up after installing the DLC, you can select the new campaign from the menu. Doing so plops you into a lengthy tutorial that covers a surprising amount of ground. You’re dropped into your new kitchen, which faces an open-air dining area by the sea. A cartoon chef then walks you through the different options and mechanics at your disposal.

As this DLC focuses on pizza, preparation is the name of the game. You have to use your smartphone to pin recipes for dough and sauces and then make them. Dough is made with a large mixer that squeezes out balls of dough into a tray underneath the machine. Sauce, on the other hand, requires you to load a food processor with the specified ingredients and place a GN tray inside to collect the sauce itself. The main baking area has a rack for storing all the GN trays and it can be pulled into the prep area, which allows you to place ingredient trays without running back and forth between the two rooms. 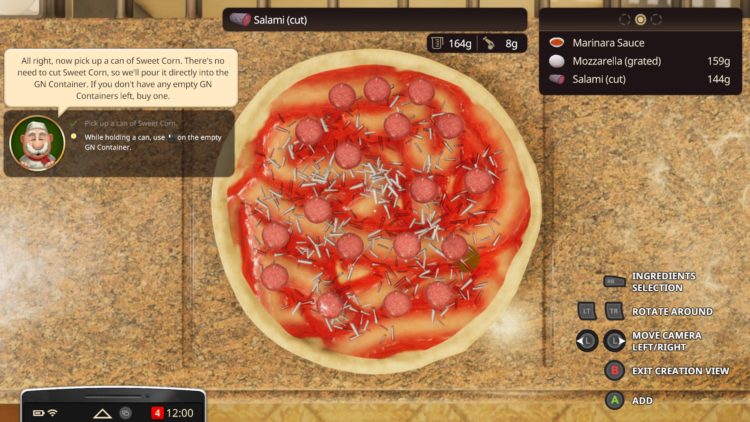 You’ll collect most ingredients themselves from the pizzeria’s cellar. There, you’ll grab a basket load it up with everything you need, whether it be tomatoes, garlic, onions, cans of corn, or olives. As you play Cooking Simulator – Pizza, you’ll unlock even more ingredients to add to your pizzas. There’s a fair amount of prep work involved, as you have to do everything manually which is just as you’d expect. You then place cuttable ingredients, such as salami, into an automatic cutter which will put slices into yet another GN tray. You’ll want all of this set up before you start accepting orders.

Once you’re ready to work, you simply collect an order by ringing the bell and you’re good to go. You can have five orders active in Cooking Simulator – Pizza at once. Each specifies the size of pizza they want along with the kind of crust, sauce, cheese, and toppings. You simply grab a dough ball, put it in the rolling space, flatten it, add all of your ingredients, and then use a peel to put them all in the oven. The oven runs off of logs and you’ll need to add three to get it hot enough. These run out too quickly, as you’ll need to add three more every time you heat the oven, which can only cook two pizzas simultaneously. Then you pull the pizza out with a peel once it’s cooked, put it on a plate, and serve it up.

Cooking Simulator – Pizza ticks all the boxes I wanted for a pizza cooking game. The current reaction on Steam is sitting at mixed, as the game has a fair amount of bugs. Dough disappears, the tutorial will get stuck if you don’t do exactly what it says, and bad dough can bug up your table. But the devs have repeatedly shown that they’re willing to put in the time to make fans happy, so I’d say it’s safe to spend money on this, as it’ll get even better. So, is it worth it? I certainly think so. Now, if you’ll excuse me, I’ve got a couple of pizzas in the oven. 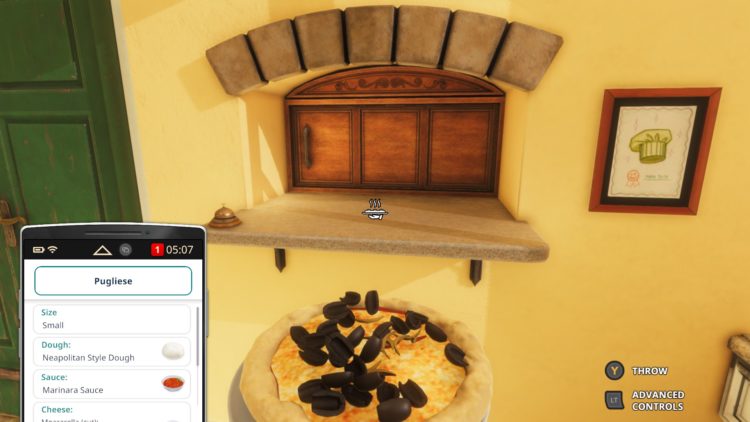 Observer: System Redux – Is it worth it?