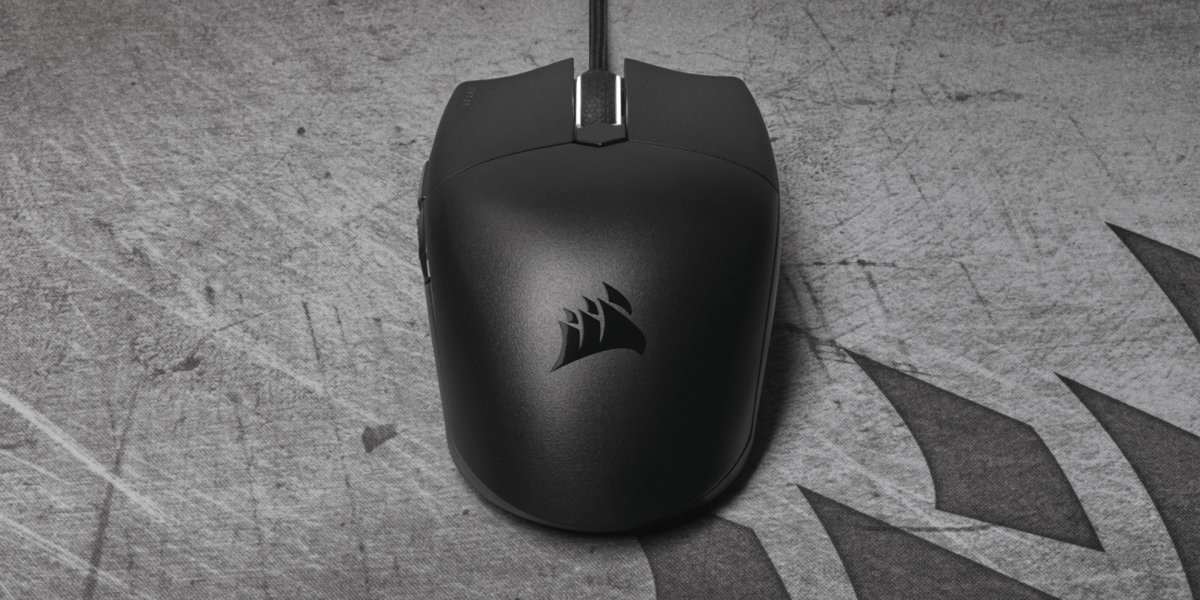 I was never too picky about what mouse I used for gaming. When I just got started playing games on my old laptop in middle school, I was happily using a trackpad to play Team Fortress 2. Now my standards are much, much higher. I play games like Call of Duty: Warzone that require good reflexes and some pretty precise mouse movements. Now I daily drive a Logitech G502 Hero gaming mouse, a big tanky hunk of plastic and metal designed for gamers. That may be why my first reaction to picking up the Corsair Katar Pro XT was “oh my God, I can’t believe how light this is!” Marketed as an ultra-light gaming mouse, the Katar Pro XT certainly is just that — light. Maybe not ultra-light though, as you’ll definitely find lighter gaming mice out there.

Coming in at just 73 grams however, the Katar Pro XT lacks any heft whatsoever. For someone who hasn’t used a lightweight mouse, well, ever, this was a fantastic introduction. But while I used this mouse over the course of a week, its real tests came as I paired it with playing games. Besides, it is a gaming mouse, and if it’s going to live up to that title, it better be good for gaming. After using it for a while, I can say it’s definitely not the best gaming mouse out there, but there’s still a strong case for the Corsair Katar Pro XT.

Easy to use and on the eyes

Like many other mice, the Katar Pro XT is simple to use. It’s a plug-and-play, so if you’re fine with its default settings you can just get right to gaming, though you won’t have the best time. Anyone who intends to use this gaming mouse for gaming (so, assumedly anyone buying it) should download ICue, Corsair’s proprietary software. With it, you can set up a total of four different DPI settings. If you want, you can even boost your DPI up to 18,000. You can, but you really, really shouldn’t. 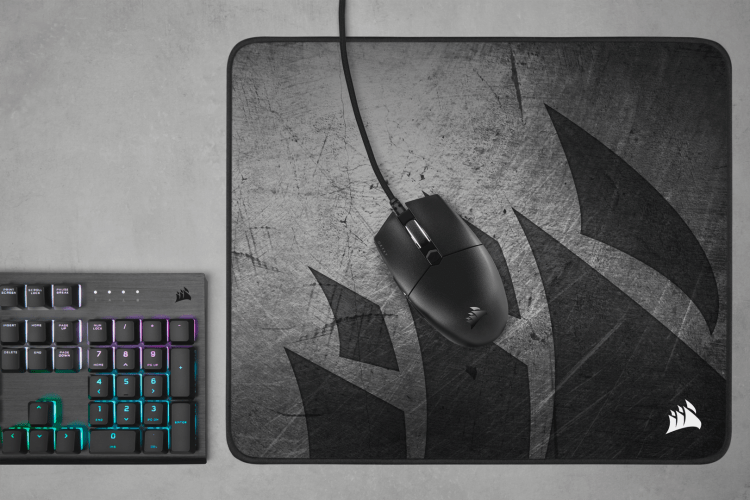 Beyond assigning DPI, you can use ICue to create macros, and change up the mouse’s RGB. Now, for a gaming mouse, the Corsair Katar Pro XT has a rather subdued look. I wouldn’t reasonably look at a mouse like this and think “gamer” like I would my G502 Hero, which has so many metallic edges that I could kill a man with it. Instead, the Katar Pro XT sports a softer, round design, akin to your everyday office mouse. Its black plastic shell is simple, and from a distance, you probably couldn’t even make out the Corsair logo.

Really, the thing that stands out visually about the Katar Pro XT is its lone bit of RGB on the scroll wheel. Like the RGB on any other mouse, you can set this to a variety of patterns and colors. I kept mine on the rainbow setting and ended up enjoying it well enough. It was never overly bright or obnoxious and left the mouse with a more “pro gamer” look — if you’re into that. I personally would have no problem bringing this mouse into an office space. It looks sleek, clean, and with its small amount of RGB, you can still stand out just a little bit while feeling professional.

Despite its immaculate design, the Corsair Katar Pro XT isn’t an office mouse — it’s a gaming mouse. For gamers. And in this aspect, it has some serious design issues. They mainly stem from the mouse’s lightweight build, and problems like these may be systemic among mice that weigh 73 grams or under. If that’s the case, I can’t understand why any gamer who wants the best out of their mouse would go with something lightweight. All the same, the Katar Pro XT has some serious faults when it comes to its gaming performance.

First and foremost are unintentional clicks. The Katar Pro XT comes with Corsair’s Quickstrike buttons, which the company claims offer “the precision and responsiveness you need in critical moments.” However, I ended up having critical moments in my games ruined with misclicks that I’ve never had to deal with before. Now, my mouse space isn’t enormous, but it is large enough for me to bring my cursor across both of my monitors at 800 DPI. However, there are times in which I have to lift up my mouse and bring it back down, usually because I’ve run out of mouse space somewhere.

The first few times I did this while playing Call of Duty: Modern Warfare, I noticed I was firing my gun unintentionally. I initially disregarded it, but noticed that it kept happening. Eventually, I did a test and realized that every time I brought my mouse back down after picking it up and my index finger was over the left mouse button, I was inputting a click. Whether that issue is caused by the Katar Pro XT’s low weight or the extreme sensitivity of its Quicktrike buttons I don’t know. What I do know is that I ended up giving away my position by firing my gun accidentally. In other games like Counter-Strike: Global Offensive, issues like these can end up losing rounds. 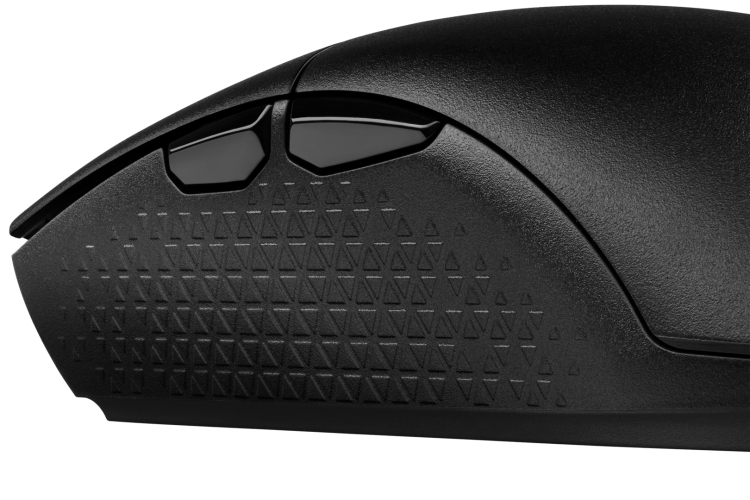 Continuing with input issues, the Katar Pro XT sports two exceptionally mediocre side buttons. Now, these are typically what make a gaming mouse a gaming mouse beyond aspects like the adjustable DPI. As such, it’s important that side buttons be done right. Not to heap endless praise on my daily driver, the G502 Hero, but that mouse has fantastic side buttons. They’re different lengths so you can easily tell which is which just by feel. Likewise, they jut out just a bit so they’re easier for your thumb to find.

The side buttons on the Katar Pro XT on the other hand are just, for lack of a better word, squishy. Made of the same black plastic that makes up the rest of the mouse, these buttons are far more uniform and flush to the side of the device. It makes sense that they were designed this way, overall it lends to the sleek style of the mouse. In practice, though, the material makes clicking these buttons far less satisfying than the side buttons on any other mouse I’ve tried out.

Besides these issues, I had a wonderful time using the Katar Pro XT. It’s a comfortable mouse that didn’t strain my hand after multiple hours of use. Accuracy wasn’t an issue either; I was still snapping onto enemies and tracking like I was using my G502 Hero. If I ever felt that anything was off, I’d simply go back into ICue and change my DPI settings just a bit and hopped right back in. For gaming, this mouse performs well where it needs to but suffers from some unfortunate setbacks.

Good for what you get

Ultimately, the Corsair Katar Pro XT is just a fine mouse. It’s not great, it doesn’t exceed expectations, but it doesn’t exactly fall too far below them either. The truth is that I would pick this mouse up in a heartbeat if I really needed one, and that’s mostly because of its price. The Katar Pro XT will retail for just $29.99 USD when it releases, an extremely low cost for a gaming mouse, especially one from a premium brand like Corsair.

If you’re in the market for a cheap gaming mouse, I’d be hard-pressed to recommend anything besides the Corsair Katar Pro XT. For what you’re paying, you’re getting a pretty solid mouse. Sure, there are issues, but at just $30 USD you can’t expect perfection, and this mouse certainly isn’t perfect.

A lightweight gaming mouse from Corsair.
8

The Corsair Katar Pro XT is fantastic for something that retails at $29.99, offering a pleasant daily user experience. For gaming, the mouse usually performs just fine, but design oversights have left it with some small, game-impacting issues.

By Daniel Pinheiro11 hours ago
Reviews