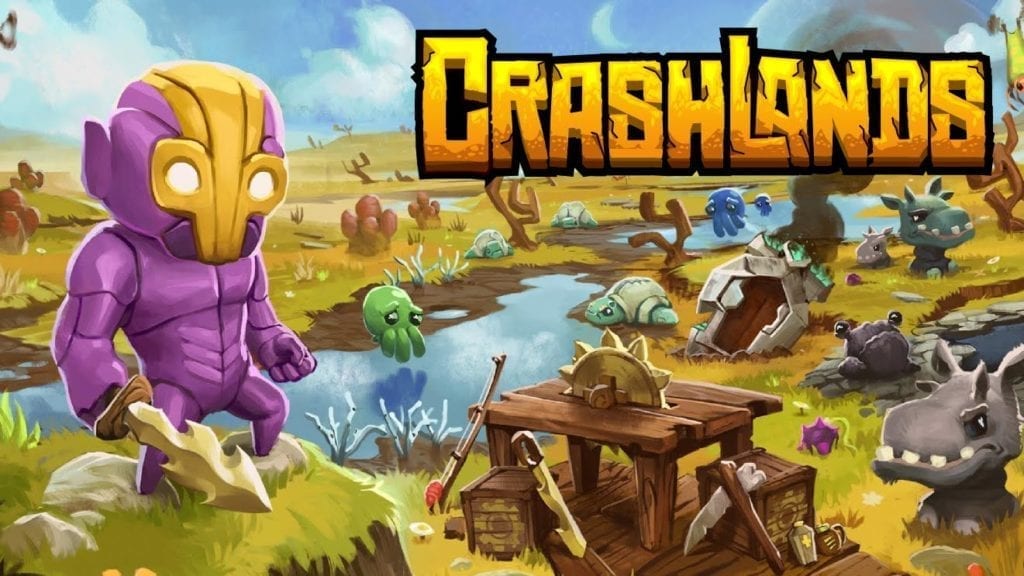 Crashlands, what’s that? It looks ridiculously cute. And it is! It’s an action-crafting RPG with a few twists, brought to you by three brothers collectively known as Butterscotch Shenanigans.

You will take on the role of Flux Dabes, a galactic delivery truck driver. Your latest shipment has been delayed by a megalomaniacal alien named Q. Doesn’t she know it’s rude to delay deliveries? You and JuiceBox – your robotic sidekick/voice of reason – end up crash landing on planet Woanope, where you must fight your way to world domination! Or at least send a message back to the Bureau of Shipping to get those packages delivered.

Each character you meet in Crashlands will be brimming with personality, but they can barely do things for themselves. That opens up the opportunity for you to do ALL THE QUESTS!  Before you run off and do those, though, you’ll probably need some tools.

Break down the resources available on the planet in order to gather materials to create everything from simple chairs to laser clotheslines. We’ve yet to find out what that laser clothesline’s for, but it sounds pretty darn cool. Crashlands does away with inventory management and will let you access items in your inventory as needed. You won’t have to sift through pages and pages and pages of inventory just to find what you want. Poof! Life’s simpler this way.

Among the things that you can craft in-game are armor and weapons. What for, you ask? What a silly question. To fight with, of course! You’ll never run out of options here: shoot fire, summon lightning from thin air (is that you, Storm?), poison everything, or even mess around with the space-time continuum! Sounds like a grand time to us.

Fight the creatures that roam Woanope, each of them with a unique attack combo that you’ll have to figure out in order to defeat them. This game is not about who can click reallyreallyfast, it’s about skill! Win these battles and you will be handsomely rewarded with hard-won creature parts for even more crafting fun.

You can beat up a bunch of creatures to harvest crafting materials from them, but have we mentioned the creature eggs? You can take these back to your base, raise it as your own, and voila! Instant pet-slash-death machine. It can be your sidekick as you prance into battle.

Wait, what do you mean you don’t have a base? You didn’t build one?! C’mon, it’s really not as intimidating as it sounds. The folks at Butterscotch describe it to be “like finger painting.” That’s about as unintimidating as it gets, folks. Build some walls, lay down some flooring, and scatter some throw pillows. This is gonna be home to you, your tamed beasts, and your crafting stations, so you might as well make it comfy.

All in all, Crashlands looks like it’s gonna be a good time. Test your mettle as you explore seemingly-infinite areas full of creatures, resources, and sentient beings for you to dominate. The ButterscotchBros (are we allowed to call them that?) admit that it’s not an infinite world, but they promise that it’s really, really big.

Crashlands has been in development for roughly ten months, and is a sort of legacy project for one of the ButterscotchBros, Sam. He was diagnosed with cancer in November 2013 (and he’s still fighting!), and what was supposed to be a cathartic project ballooned into the game we’re seeing take form today. If you want in on the beta testing period, grab a BscotchID and watch out for the announcement on their blog. Sounds like it may happen soon, because the Butterscotch Shenanigans guys seem confident about launching (crashing?) Crashlands by the end of Summer 2015.