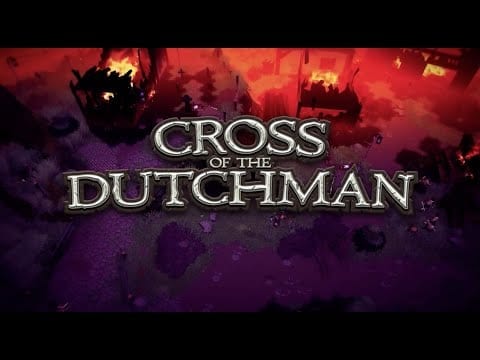 History buffs and gamers seem like an incredibly unlikely combination, however Triangle Studios (Battleflip, Robot Dance Party) have crossed stories of old with technology of the present to bring Cross of the Dutchman to gamers everywhere. This game, unlike similar history titles like Assassin’s Creed, focuses on a very specific story from Europe during the 16th century, with Triangle Studios priding themselves on their accuracy to the setting and story.

Cross of the Dutchman puts players in the role of Pier Gerlofs Donia, a rebel and pirate in what makes up the modern day Netherlands. Players follow his role during the Frisian rebellion against Saxon and Habsburg rule over Europe (I’ll let you consult your history textbooks for that) and allows players to peek inside 16th century Europe with a true story as a backdrop. However, the story doesn’t scratch very far beyond the surface.

While the game boasts an incredibly accurate story, there seems to be an amazing lack of depth. The Cross of the Dutchman website reads:

Triangle Studios was very thorough when it comes to researching the world of Cross of the Dutchman. We have collected historical articles, visited towns and gathered as much information as we could in order to portray the world of our hero in the best way possible.

Despite the alleged research done on the story of Pier Gerlofs Donia, there seems to be more information on him from his very short Wikipedia page than in the actual game. History is made of stories, and it’s such a shame to see an incredible story be reduced to a shallow one with lifeless characters and lackluster dialogue. A game like Cross of the Dutchman needs to draw a player in for the story to work, but despite my undying attention to the title, I always felt distanced from it.

Cross of the Dutchman is a self-proclaimed action RPG, but that probably isn’t the most accurate description. The game is more of a brawler with very few RPG elements making an appearance. There is no character progression, no inventory, no loot, and very few upgrades that players can purchase for Pier. There’s huge opportunity being blown off by limiting players so much, further distancing players from the “true” story the game was meant to deliver, and ultimately leaving players feeling like they never stepped into Pier’s shoes at all.

Even the visuals of Cross of the Dutchman serve to push players away from the story. Every step Pier took looked awkward and robotic, seeming forced. Despite Pier being known for being so large, he never felt like he actually had any weight as he moved along the screen. I have never been concerned about a character appearing to have weight before, but the movement of Pier is so clunky that it puts indistinguishable details, like weight, under a magnifying glass.

The level design of Cross of the Dutchman is some of the worst I have ever seen. Every map, of which there are only a few, looks and functions exactly the same. Only in the last two chapters of the game is there any change in the environment design, and even that change is subtle at best. Even worse is simply trying to transverse through each map. They are plagued by invisible walls. Shrubs, trees, fences, anything that could fit in the environment has a thick invisible wall around it, making the game next to impossible to navigate.

One of the only redeeming factors of Cross of the Dutchman is the combat. While it isn’t anything special, it provides a small amount of fun. Pier fights with his fists during the beginning until being granted a sword about halfway through the game (which isn’t very far, but more on that later). Players can purchase special attacks for both fists and the sword, which provide slight variety to change up the combat. Despite that, players will still be randomly clicking on screen, hoping the battle turns out in their favor.

Unfortunately, everything outside of combat falls flat. The majority of the game is comprised of combat, walking and meeting with other characters, or missions where Pier has to sneak past guards. The sneaking missions never really made any sense though. There was never any incentive for Pier to sneak around soldiers as opposed to just killing them. It seemed that soldiers holding a lantern were more of a threat to Pier than those wielding a longsword.

The game does provide a nice soundtrack for players to enjoy while traversing the dull world of Frisia. Music rises and falls as combat moves in and out, and adds a subtle realism to the world and the story behind it. Walking may be accompanied by a lonely guitar, while huge battles may feature a full string arrangement, bringing some unity to the mostly lacking experience.

It’s a shame that the redeeming factors of Cross of the Dutchman are still subpar. The combat is decent, but never really rises above the level of amusing, and while the music does fit into what is happening on screen, it is ultimately the backdrop for a mess of a game. I wish there was more to give, but even those qualities are already stretching the boundaries of what a decent game should be.

Cross of the Dutchman is boring, with terribly planned environments, a surface level story, and horrible visuals. However, the greatest fault of the game is its length. The game took me 2 hours to beat, which included reading dialogue, watching cutscenes, and exploring to see if Triangle Studios had included any loot at all. There is absolutely no variation in this playtime either. Cross of the Dutchman is so linear that players would have to stand around idle in order to get anymore hours out of the game. It is unacceptable for a game, even at $8.99, to be so short with such lackluster content in this age of gaming.

Conceptually, Cross of the Dutchman could have been a great title. However, the execution turned a beloved legend into a trainwreck. Do not be fooled by the low price tag because Cross of the Dutchman isn’t worth even the nine dollars it has been marked for. Do yourself a favor and read up on Pier instead of playing this poor excuse of a game.