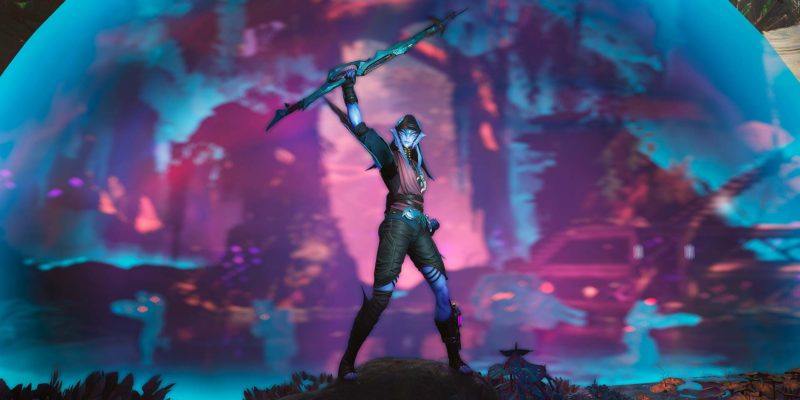 Crucible’s game modes feature both player-versus-player and player-versus-environment aspects. First, we have Heart of the Hives, a 4v4 mode where players will race to collect, you guessed it, the hearts that are left behind by “the monstrous hive creatures.” Alpha Hunters sees you and one buddy team up in a last-man-standing kind of battle. That’s all there is to it. Be the last duo to survive and you win.

Crucible‘s third and final mode is Harvester Command. It’ll be an 8v8 mode to secure and protect the harvesters that drain the planet of something called Essence. The team that reaches 100 Essence first takes the “W.”

Level up and adapt

Crucible is home to 10 hunters, each with a set of unique abilities. Hunters will have all their weapons and powers available at the start of every match, but you’ll level them up as you go along by collecting the aforementioned Essence. You select which are leveled up before each match, and these upgrades will determine your playstyle. Once you acquire all your pre-selected upgrades in the first five levels, you’ll continue to level up for power and health bonuses.

The world of Crucible will continuously throw challenges at you, with events allowing you to gain Essence and levels before you start hunting down your adversaries. The better you know the world, the stronger you’ll come out at the end. But ever-changing, you’ll have to be able to adapt in order to effectively capitalize on both your opponents and the planet’s surprises.

Crucible is now available for wishlisting on Steam, and will launch on May 20 as a F2P game. Amazon Games has its work cut out for them to keep an active player base, as there’s no shortage of hero-based shooters.

A Cyberpunk 2077 reveal event is coming in June