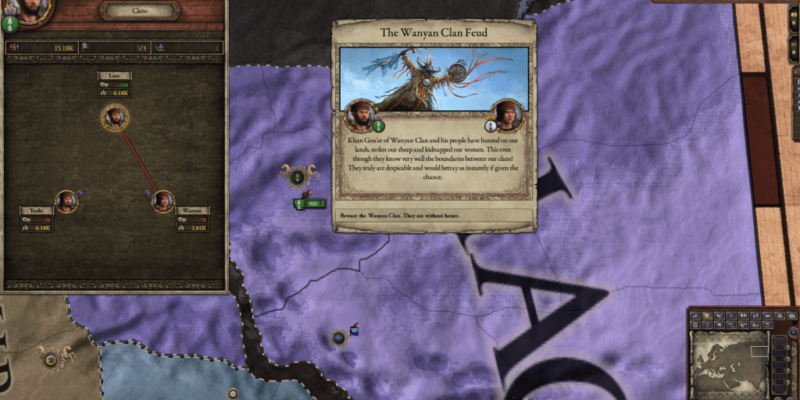 The Crusader Kings 2 ‘Jade Dragon’ DLC is coming out on 16 November; ahead of that, Paradox have released the patch notes. These, of course, deal with changes to the game from both the upcoming DLC and accompanying free update.

In the same developer diary post, Paradox show off ten new achievements coming with Jade Dragon’s release. These range from expected inclusions like “Request an Imperial Marriage from China” to the more alarming “Eat a character of the Bön religion.”

The Crusader Kings 2 2.8.0 patch notes are the “biggest” in the game’s history, according to the developers. By way of demonstration, they’ve printed them out and laid several of the staff next to them. 2.8.0 is officially five and a half Paradox staff in length.

For that reason, I’m not planning to copy and paste all of it. Here are the main Free and Expansion features, though.

– The Chinese Empire:
– China Screen:
– China is now present as an off-map power, accessible through a new button near the minimap
– The Status and Policy of China affects their behavior and how you can interact with them, beware an Expansionist China!
– Chinese Dynasties and History present throughout all bookmarks
– Tribute & Boons:
– Send the Emperor tribute in the form of Eunuchs, Concubines and much more in order to gain his Grace
– Spend Grace to receive powerful boons, such as Siege Engineers, Scholar-Bureaucrats, Chinese Artifacts, Imperial Marriages and MUCH more!
– Flavor & Immersion:
– While playing in the East you will feel the presence of China though new flavor events and interactions
– Beware ambitious adventurers spilling out of the east, such as Rebel Generals, Displaced Imperial Princes and Jurchen Raiders
– Numerous new China-themed Artifacts to add to your collection; The Art of War, Classics of Poetry, Serpent Spears, Ceremonial Silk Gowns, to name just a few!
– Hostile Actions:
– Disregard the Emperor’s opinion and raid China for instant rewards
– Invade China and put your dynasty on the Dragon Throne

– New Playable Religions:
– Bön Pagan; the ancient religion of the Tibetan plateau, a fusion between unreformed and reformed pagans, this religion offers unique possibilities
– Taoist; a collection of ancient traditions from China, with many administrative advantages this religion is perfect for players who enjoy playing tall

– Casus Belli Expansion:
– Revised Tributary system, with new permanent Tributary States that also provide you with soldiers in addition to golden
– Many new CB’s specifically tailored for the early game, such as Border Dispute, Ducal Conquest and Force Vassalization
– Additional CB’s for larger nations without many options, such as Great Conquest and De Jure Duchy claims

– Rally Points:
– Rally points can now be placed to allow for easy management of your levies in wartime, your troops will automatically move to and merge at destinations you define
– Set rally points for navies, which work much like the ones for levies

– New Artifacts & Ways to Get Them
– Compose a Book; set your scribes to work writing a new work of literary wonder, based entirely on the personality of your character of course!
– Search for a Smith; send word for a smith to forge you new sets of weapons, armor and jewelry

– Added Tibet as a new playable region
– Filled in the ‘Tibetan Plateau’ wasteland with new provinces and mountain passes
– Added the Empire of Tibet title, which consists of 4 new Kingdoms
– Full history for the 769, 867 and 1066-1337 bookmarks for the region
– Added new Sogdian Zoroastrian heresy ‘Khurmazta’
– Added Game Rule controlling Siege Assaults
– Added Game Rule for Siege Events (On, Off, Defenders only)
– Added Game Rule for Multiplayer Assassinations
– Added Game Rule for Multiplayer Invasion CBs
– Added Game Rule for Multiplayer 3rd Party Claims
– Added Decisions to form the Knights of St. Anthony and the Knights of St. Addai
– Added Assyrian culture and some historical Assyrian characters
– Tweaked the Nestorian Holy Sites
– Added Manichean Holy Sites
– Added a “Bema” festival for Manichaeans
– Added a “Sadeh” festival for Zoroastrians and Khurmazta
– Added Holy Order for Manicheans
– Added a Manichean Head of Religion
– Artifacts can now be destroyed from the Treasury screen
– You now receive a notification when receiving a new artifact, or when an artifact you should have received was destroyed because you already had one (if it is non stackable)
– Added a special Honorary Title called Teacher. Teachers become the default Educators of children.
– Armies now use whichever flank leader has the best siege modifier for determining the leader bonus to sieges, and the best movement speed flank leader for determining movement speed
– Increased the number of Counties and Baronies in the Tarim Basin area from 17 to 32, which should make it more interesting to play there
– Increased the amount of overall Holding Slots in the Tarim Basin area
– Non-Jain/Buddhist Monastic Orders get a new rank 1 power which gives a chance for their wards to gain attribute points during their education and upon reaching adulthood a chance to remove a wicked trait or gain a pious one
– The target of a tributary war now receives an event where they can offer peace right at the beginning of the war, only weak realms are likely to do this
– There are now three tiers of Kinslaying based on how close to you the person you killed was. The closer the relation the bigger the punishment:
1) Kinslayer – Siblings, parents, children any direct ancestor or descendant.
2) Familial Kinslayer – Blood aunts/uncles, cousins, nieces/nephews.
3) Dynastic Kinslayer – Any other dynasty member.
Muslims are exempt from gaining Kinslayer traits and you will only get the traits if the death is public knowledge.
– Unlocked the Charlemagne culture conversion events as those cultures are also present in the Old Gods start date.
– The golden hand, iron hand and prosthetic leg modifiers are now artifacts. They can not be gifted or inherited.
– Map Update of the Middle East
– Added the kingdom of Daylam
– Added the kingdom of Khorasan
– Added the kingdom of Yemen
– Added the kingdom of Iraq
– Also added a few new duchies to go along with the new kingdoms
– The Syrian desert now exists to restrict county placement and army movement
– Moved and reshaped most provinces in the Middle East, including the Arabian Peninsula all to way to the Indian border
– Added 18 new counties
– Renamed several counties, duchies and kingdoms to better represent the updated layout
– The “equip” button is no longer disabled if a slot is filled; instead clicking it will replace whatever is in that slot (the first item it finds if the slot holds more than one item). E.G., the Equip button for “Golden Bracelets” will cause those to be equipped in place of your equipped “Silver Bracelets”
– When dying, the game will now ensure that your heir has the same items equipped as you did if at all possible
– Equipped artifacts no longer have any chance of being destroyed on succession, except if there is no dynastic heir
– The “has guardian” icon on a character now takes you to the guardian’s character page if clicked
– The “leading troops” icon on a character now pans to the unit they’re leading, and selects it if it is yours
– The “council action” icon on a character now pans to the province they’re taking the action in
– When a landed character is selected, their realm will now be highlighted on the map, similar to how CB targets are highlighted
– If you click the currently selected character again, the game will now pan to their location
– When assigning “Proselytize” job action, the map coloring will be different if the province is of the wrong religion, or if the target is an independent ruler rather than one of your provinces
– You can now arrange marriage on behalf of your landed children and grandchildren, not just those in your court. They will now also always accept your marriage proposals. Both of these features are only usable if they are your vassals or below, and have been rulers for at most 10 years
– Your children and grandchildren now have a checkbox on their character page that can be used to prevent them from getting married by the AI, though they may still get married by event and similar. Useful for ensuring your landed relatives don’t get into bad marriages. Like arranging marriage on their behalf, this can only be used if they are your vassals or below, and have been rulers for at most 10 years
– New artifact pictures for the Gjallarhorn, Image of Edessa, Weeping Statue, Sampo, Saintly Skull, David’s Sling, Handgun, Compass, Saintly Tongue and Yada Tashy
– Added an option to switch between grey wastelands and wastelands showing terrain
– Added an option to have wastelands be colored by neighboring realm if a single realm controls more than 2/3 of bordering provinces