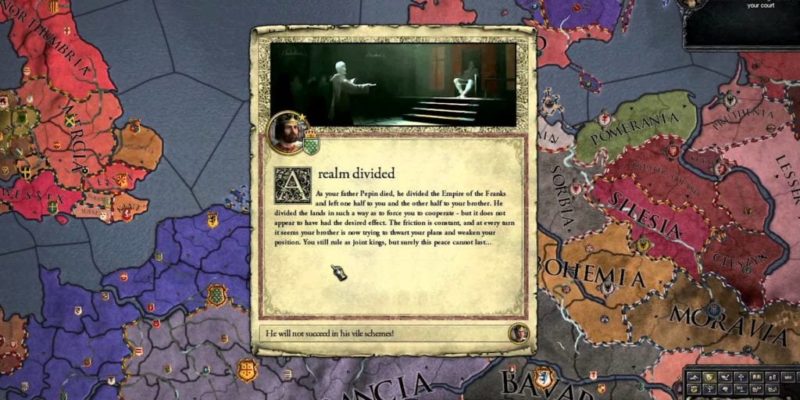 As is standard procedure for the release of a major Paradox grand strategy expansion, Crusader Kings 2’s Charlemagne DLC is accompanied by a big patch for all players. All of the stuff detailed in the patch changelog below applies to all versions of Crusader Kings 2, you don’t need to own the Charlemagne expansion to benefit from it.

Charlemagne does add some features of its own if you purchase it, of course. It’s described as a “timeline extending, story developing, culture expanding, and Fancifully Frankish expansion” which follows the rule of Emperor Charlemagne. You can read more about that, here.

Here’s a soothing trailer showing a brief overview, followed by the patch notes for 2.2.

MAJOR:
– Added tribal holdings
– Added a learning scenario for new players.
– Added the Centralization law, used to control demesne size and vassal limit bonuses.
– Added Era and character quick selection screen
– Wars can no longer be won before a major battle has taken place or 3 years have passed
– Levies from settlements can now be raised again if they are more than 50% full
– Resolved CTD when disbanding troops.
– Fixed bug where customized Coat of Arms was randomized upon reloading the game.
– Fixed CTD when hovering over the ‘Create’ button for titles with no de jure Counties.
– Added new decision to go into hiding for characters who are (real or imagined) targets of murder plots. Spouse or children who are targets can also be sent into hiding.
– Ibadi is no longer a Sunni heresy, but a separate religion.
– Added Kharijite religion as a possible heresy for Ibadi.
– No longer possible to form the Holy Roman Empire if you’re not independent.
– Added large number of tribal holdings to map for all start dates.
– Removed a large number of obsolete tribal titles, and changed others to bring them in line with the new system.
– Added Imperial Administration Law for Byzantium ( Increases vassal limit and allows viceroys on both kingdoms and duchies while slightly lowering feudal vassal opinion )
– Fixed CTD with tradeposts when resigning game and starting a new old gods game.
– Fixed a crash when clicking death-reason when a character was killed in a battle without specific killer
– Fixed OOS caused by bottleneck logic in combat
– Fixed OOS caused by mismatch of modifiers
– Fixed problem in triggered modifiers that could cause OOSes in mods
– Fixed crashes caused by the ingamelobby
– Fixed crashes in the game setup lobby
– Fixed crash caused by rebel flag in chat message box in multiplayer
– Fixed OOS problem caused by AI logic in when units tried to load onto a ship
– Fixed OOS caused by spawn_unit effect
– Added Somali culture i East Africa.
– Fixed crash when leaving the tutorial and going back to the menu.

VICE ROYALTIES:
– Vice Royalties are titles that revert back to the liege when the owner dies.
– To be able to grant Vice Royalties, you need to have the correct Vice Royalty laws, unlocked through the legalism technology.

TRIBALS:
– Instead of Crown Authority, tribals use the Tribal Organization Laws.
– Unreformed pagans will dislike increasing Tribal Organization, whereas other vassals will prefer and vote for increasing Tribal Organization.
– A decision can be taken as a tribal in order to adopt Feudalism or to found a Merchant Republic, which can be taken when:
– A Tribal Holding have a fully upgraded Hillfort or Market Town.
– The realm have max Tribal Organization.
– The liege is not an unreformed pagan.
– The Capital Province is coastal (required only for players and the found a Merchant Republic decision)
– Vassals in tribal realms with low Tribal Organization can become independent when the liege dies, especially if the Heir has the Weak trait.
– Tribals can in wartime use a decision to raise event troops in exchange for prestige, which will be disbanded when the current war ends.
– Non tribals can always for free revoke tribal vassal titles from vassals of a different religion.
– A liege can not build any holdings in tribal provinces owned by a tribal vassal.

DECADENCE:
– The Decadence event will now only trigger for characters who have a King or a Ruler with at least 7 in realm size as close kin.
– Religions with the landed_kin_prestige_bonus flag enabled will now get a prestige bonus for having landed kings as your vassal.
– The “Straighten Up” decision can now be taken again after 10 years.
– The “Straighten Up” events have more outcomes, and the decadent character can now attempt to strike back.
– Some “Straighten Up” outcomes do not give the dynasty head a free imprisonment.
– Added CB for usurping decadent dynasty members.
– Added event chain for assasinations targeting decadent characters.

TECHNOLOGY:
– The Short Reign Years effect was moved from Legalism tech to Majesty tech.
– The Demesne Size effect was removed from Legalism tech.
– The Legalism tech is now used to unlock laws, such as Crown Authority, Vice Royalties, Harsh Vassal Taxation and Max Vassal Levies.
– Doubled all bonuses given by Light Infantry , Heavy Infantry, Cavalry and Siege Equipment technologies.
– Doubled tech cost penalty for being ahead of time.

AI:
– Fixed issue where AI was unable to invade using already raised ships, this was preventing characters with event spawned ships ( adventurers ) from invading.
– Fixed issue where the AI would repeatedly split and rejoin armies causing them to get stalled
– AI emperors can now grant kingdom titles.

MODDING:
– Fixed some problems with modding succession laws for Patricians and Doges
– Variable triggers and effects can compare variables between types of scopes (country/province)
– Historical Tech is now seeded completely differently and can be configured to a much greater degree ( see the “historytechnology” folder )
– Event texts can now use [GetDay] and [GetWeekday] in the localization file.
– Special culture unit models are now suffixed with the unit name (i.e. “horse_archers”, “war_elephants” and “camel_cavalry”) instead of “SPECIAL_UNIT”.
– Technology can now be scripted to unlock laws, by using the following format in the technology file: “add_decision = crown_authority_1”
– Added a Long Character Event type.
– Added the multiplayer trigger to distinguish multiplayer and singleplayer games.
– Added a is_unique flag for minor titles. Only one unique minor title can be held by each character.
– Added triggers ‘over_vassal_limit’ and ‘over_max_demesne_size’.
– Added a maintenance_multiplier-flag for event spawned troops. Troops with this flag will have normal maintenance cost multiplied by this value.
– Support to create custom titles from effect
– has_newly_acquired_title trigger to check if a character holds titles he just recently acquired
– num_fitting_characters_for_title trigger to check how many characters in ones court that would fit for a specific title
– best_fit_character_for_title effect to give you the character best fit for a title
– Added on_character_convert_religion on action
– Added on_character_convert_culture on action
– Fixed bug in has_plot trigger
– Added on action for acquiring nicknames.
– Added in_hiding status
– Added any_enemy_plotter, any_known_enemy_plotter, any_unknown_enemy_plotter as effects and triggers
– Added random_enemy_plotter, random_known_enemy_plotter, random_unknown_enemy_plotter as effects and triggers
– Added any_unique_dynasty_vassal effect, which gets vassals of different dynasties (and also not of your own).
– Added num_of_unique_dynasty_vassals trigger, which gets the number of vassals of different dynasties (and also not of your own).
– Added is_dying trigger, which checks if character is about to die. Used for on_actions called just when character dies, such as on_chronicle_owner_change.
– Has_job_title trigger now also support yes/no values.
– Added character modifier increase_plot_power and event modifier increase_plot_power.
– ai_feudal_modifier and ai_republic_modifier can now be used with buildings to modify the ai creation weight if the ai is republic or feudal (but also if the AI is tribal but strive to become republic or feudal).
– The vice_royalty (yes/no) flag in title history can now be used in order to set whether the title is a viceroyalty or not.
– Added trigger ‘has_earmarked_regiments_not_raiding’

Dragon Age: Inquisition trailer is all heroic and a bit spoilery