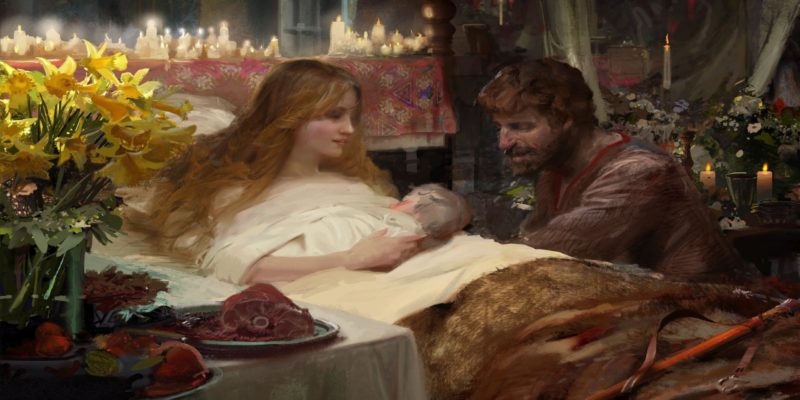 After learning how to educate kids in Crusader Kings III, the rest of your character’s journey unfolds once they reach 16 years of age. That’s when you’ll get to choose a Lifestyle corresponding to the five skills (Diplomacy, Martial, Stewardship, Intrigue, or Learning).

The one that matches the childhood education/educational trait will gain additional XP too. This allows you to unlock more perks as the character ages:

Note: You may select a new Lifestyle/Lifestyle focus once every five years 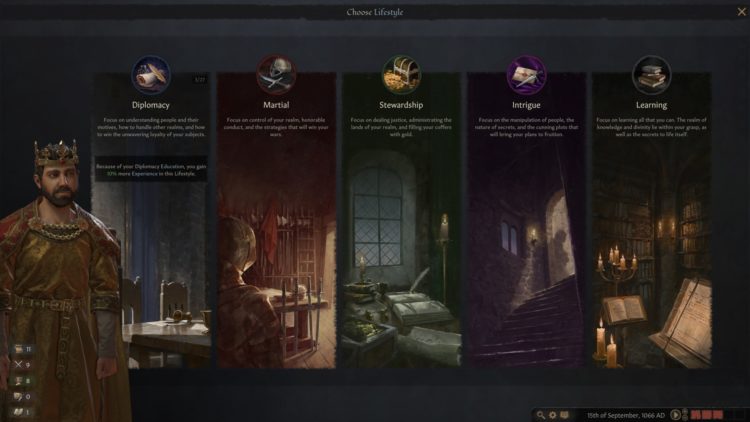 The left-hand side shows you the Lifestyle focus. Each one provides different bonuses, though the XP gains will be similar for all. Ideally, you should choose the one that nets the most benefits even if the flat increase to the stat isn’t that high. For instance, Diplomacy’s “Family Focus” gives +2 Diplomacy only, but it does add 20% fertility so you can continue making those babies.

As for the perks themselves, you’ll see that each Lifestyle has three branches with multiple perks. Of course, you’ll need to unlock these in succession so take note of the connecting lines.

While you’re allowed to choose perks from different branches anytime you have a perk point, you do have to obtain all the perks in a branch if you want to unlock that branch’s trait. This trait lasts throughout the ruler’s lifetime.

Note: If your ruler lives long enough, it’s possible to fill out the entire Lifestyle tree and obtain all the perks and traits. Doing this nets you the “Way of Life” Steam achievement. 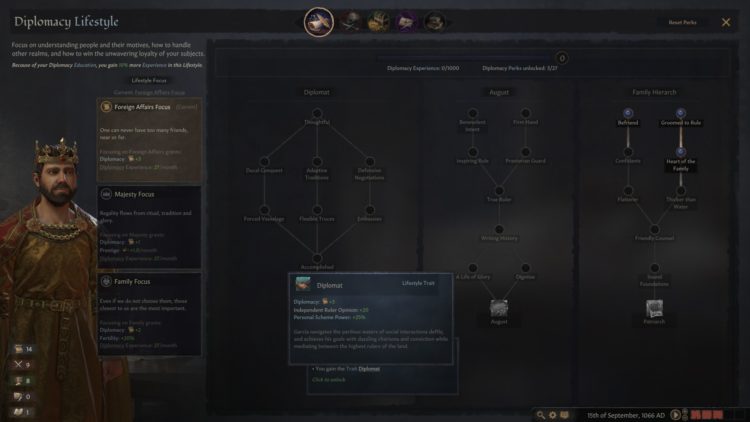 Personal tips and other findings

In my experience while playing Crusader Kings III, the vast majority of European rulers in the 867 and 1066 AD start dates tend to have a Martial Lifestyle due to their education (everyone obviously loves war). A select few, however, might focus on the Intrigue, Diplomacy, or Stewardship skills. I’ve rarely encountered those who focus on the Learning skill unless they’re rulers from the east. Then again, I haven’t checked vassals/non-independent rulers like counts.

Note 1: Do keep in mind that switching characters mid-game will still allow you to set a new Lifestyle/Lifestyle focus for your newly selected ruler. Likewise, starting a new Crusader Kings III campaign will sometimes randomize the perks that adult rulers have already unlocked.

Note 2: The ideal picks you’ll see below are based on personal preference. I tend to choose certain branches when a ruler is still young (to maximize the benefits). I’ll then select other branches as the ruler gets older.

The Family Focus helps you sire more children to expand your dynasty. There are also amazing perks from the Diplomat branch: 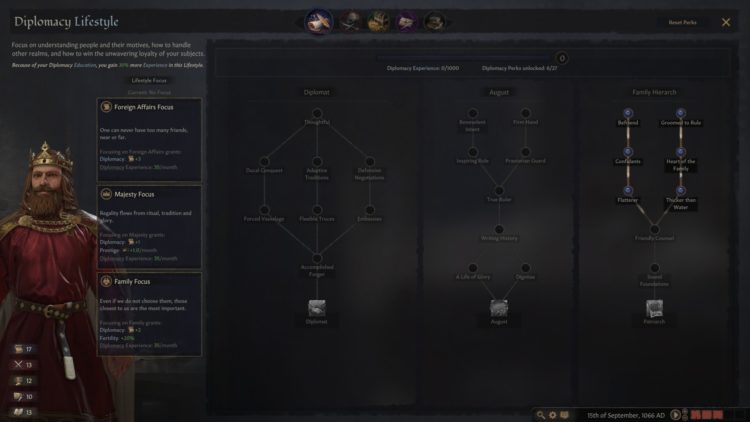 The Authority Focus is great since it increases your Dread over time. This is a stat that makes vassals more terrified of you, preventing them from joining independence factions or hostile schemes against you.

The Overseer branch (which also increases Dread) has great perks:

Note: Alternatively, rather than completing the entire Overseer tree, you could just get up to Hard Rule and then switch to the entire Strategist branch which has “under the hood” bonuses that improve the capabilities of your soldiers and allow them to eliminate more hostiles. 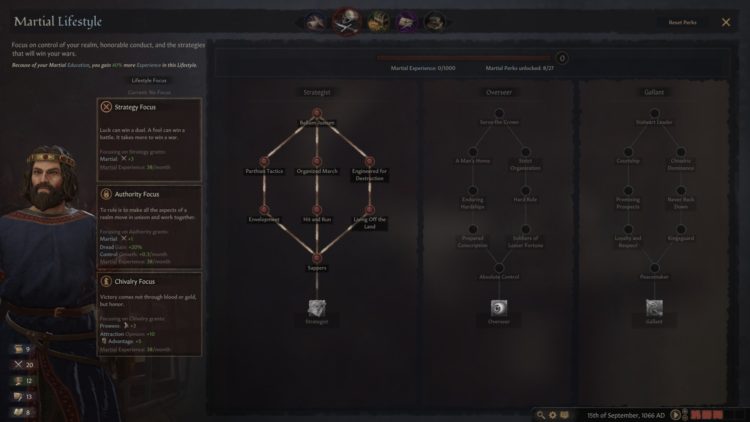 The Domain Focus is the most useful one here due to the +3 Stewardship skill bonus. The Wealth Focus is a bit weird since it doesn’t even increase your Stewardship stat at all.

As for branches, the Administrator branch is the most worthwhile in the long run:

Note: Don’t bother with the Avaricious branch until much later. Some of the options here reduce vassal opinion while others won’t be as useful (i.e., affects republican/mayor opinion only). 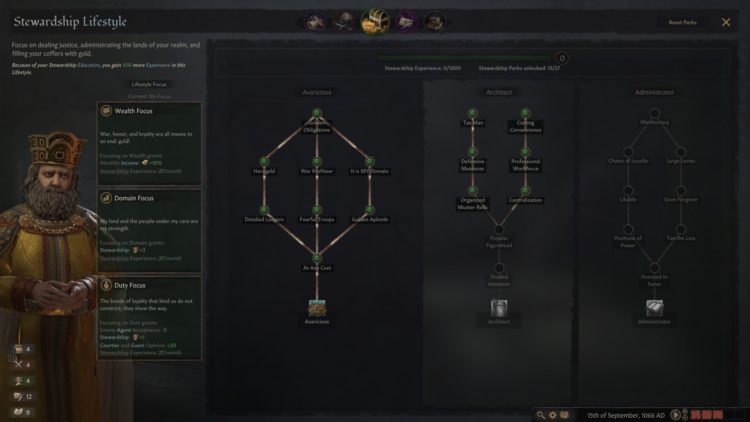 All three foci — Skullduggery, Temptation, and Intimidation — are actually viable here especially if you like focusing on Schemes and Plots. Do take note that the Temptation Focus doesn’t give you a flat bonus to Intrigue.

As for the branches, the same advice applies in that all three remain relatively useful depending on your chosen playstyle. However, there’s one very important perk to take note of from the Schemer branch: Kidnapper – Allows you to use the Abduction scheme. Using this effectively lets you cheese your way to victory, grabbing kingdoms and empires with ease.

Note: We’ve also got an Intrigue guide to help you out with the various schemes, hooks, and secrets. 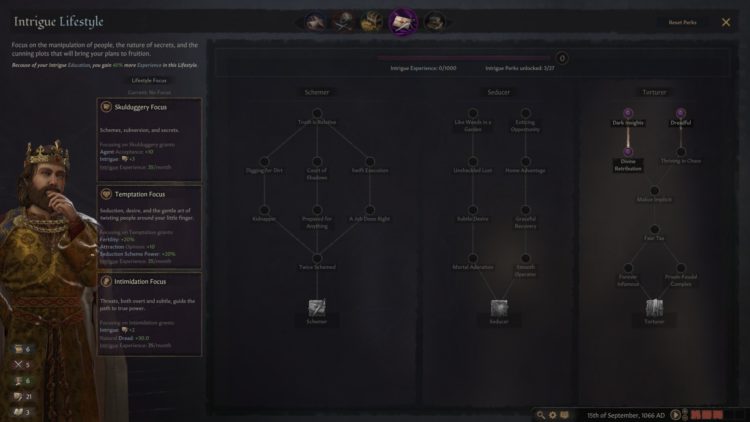 I’m partial when it comes to the Scholarship Focus since it grants the biggest flat increase to the Learning skill. As for the branches, an early pick should be the Scholar branch for one significant perk: Scientific – +35% cultural fascination progress. If you’re the culture head, you’re able to select a fascination that leads to technological advancements, and this perk helps a lot.

However, after that, you’ll probably lean towards the Whole of Body branch (for health boosts) or the Theologian branch (for piety gains). Either branch is fine, but it’s the Scientific perk that you’d need first if you’re playing as a prominent ruler in a certain culture group. 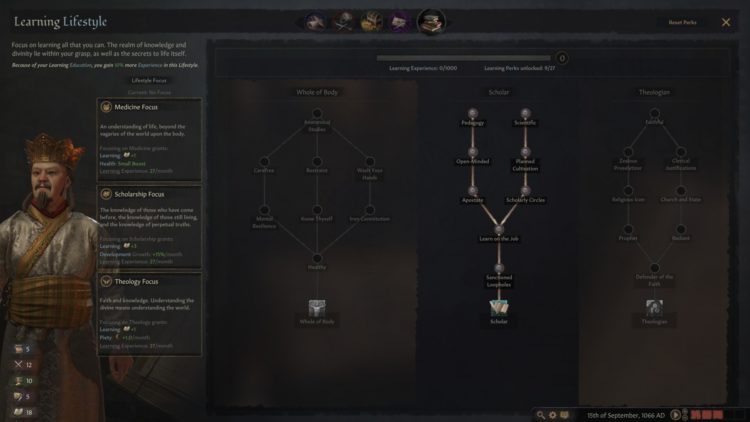 Crusader Kings III is available via Steam. For more information, check out our guides and features hub.