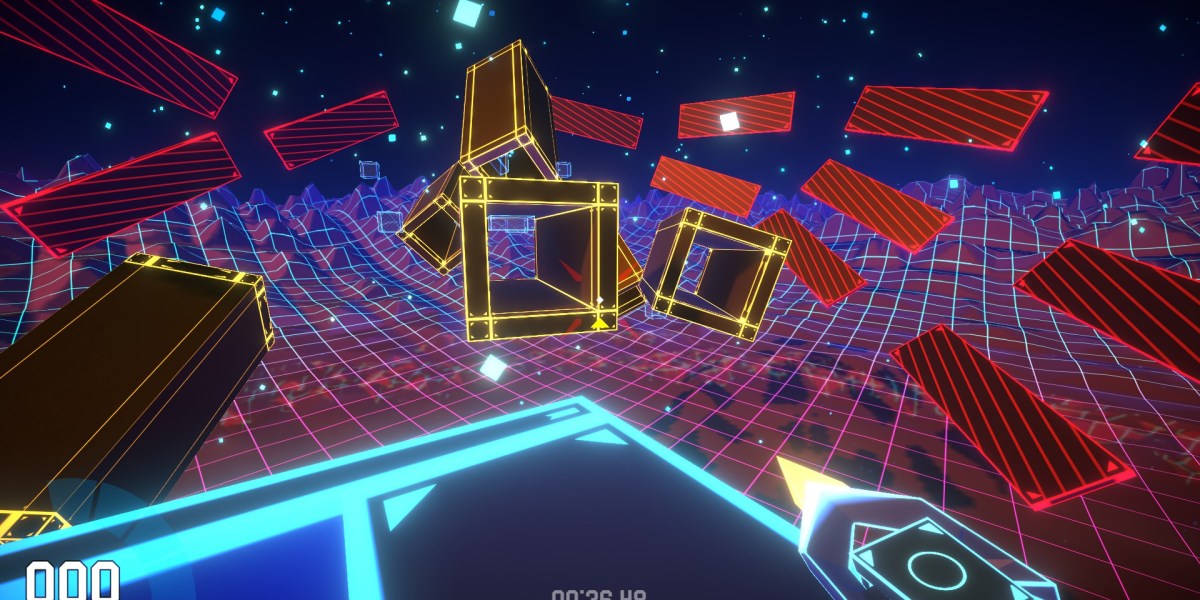 Some games have great premises. Cyber Hook is a first-person platformer that’s about grappling around cyberspace in order to get to the finish line in as little time as possible. When it focuses on this, it’s often enjoyable, if a little unambitious. Unfortunately, the game also wants to be akin to a first-person Super Meat Boy, but it lacks the quality of level design, visual awareness, and consistent precision to stick that landing. As such, the game is worth a look for anyone sold by the swinging but is irreparably harmed due to disappointing miscalculations along the way.

Cyber Hook does have a bit of a story, although it’s almost entirely unimportant as you might expect. You’re trapped in cyberspace and you meet a program interested in helping you out. He shows you the ropes and sets you on your path, all the while warning you of a sinister force that wants to destroy you. It’s perfectly effective for a level-based time trial game.

After a brief introduction that familiarizes you with the game’s mechanics, you gain access to the level select interface, which you can shoot with a finger gun to access. Cyber Hook has about 80 levels divided up into a series of worlds. Each level has three points available based on how fast you complete them. Complete the level within a certain timeframe and you’ll get all three points. The game’s progression is based around you accruing points to unlock further worlds. Levels within a world need to be unlocked by beating the preceding one, however, so you can’t skip around as you see fit. 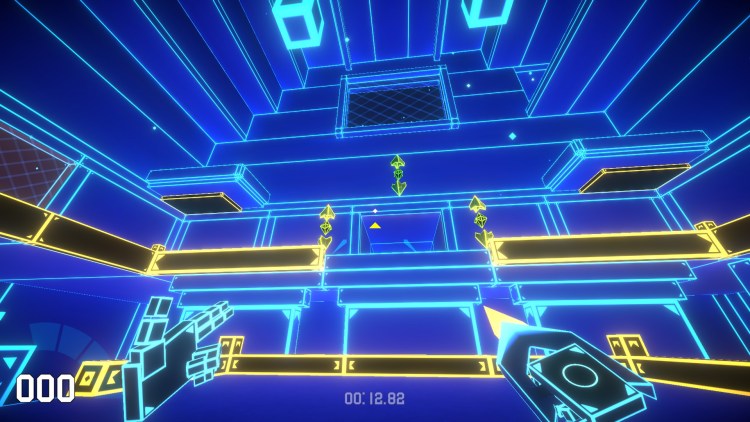 Does whatever a spider can

Cyber Hook‘s mechanics are mostly enjoyable. Your main tool is obviously the titular item that you use to swing and grapple. Once attached to a surface, the hook embeds and doesn’t release until you right-click or jump off the line. Holding the left mouse button will also reel you towards the spot you’re hooked to. While swinging and running around, your main priority is going to be on keeping your speed up, as the less momentum you lose, the faster you’ll be able to make it through the levels. The angles of your swings are naturally important, as it’s easy to swing upwards just a bit too much and destroy your momentum.

However, I noticed that my momentum was often wiped out in Cyber Hook even if I didn’t do much wrong at all. It’s extremely fickle, unreliable, and problematic. Similarly, pressing jump a millisecond too late can ruin your trajectory. Your jumps reset whenever you connect your hook to a surface, which allows you more control over your positioning. It’s worth mentioning that the hook also feels too short much of the time. The game is obviously designed for this, but it never stopped feeling weird, as you often can’t latch on to things that are barely far from you.  You can only attach your hook to blue and purple surfaces. There are four surface colors: blue, yellow, purple, and red. You can connect your hook to blue and touch it safely and you can touch yellow safely but not connect your hook to it. But purple and red surfaces will kill you if you touch them, making them instant deathtraps.

You can also fire a finger gun with the right click which is used to destroy green objects. These typically block you from connecting your hook to surfaces in Cyber Hook. You’ll also very rarely come across green enemy turrets that will shoot you if you don’t eliminate them quickly enough. Finally, you can hold shift to slow down time in order to more precisely latch onto or shoot things without worrying quite so much about timing. I personally didn’t find that the slow down made much of a difference when using a mouse, as hitting your mark isn’t all that difficult. Using a controller is obviously a different story. 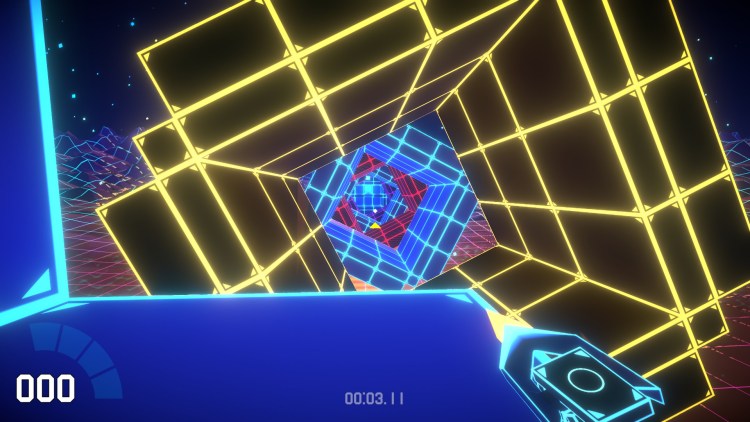 Most of that sounds all well and good, doesn’t it? And, y’know, for a lot of the game, it is. The levels where you swing from point A to point B in order to simply get the best time are simple but generally enjoyable. It’s entertaining to climb up enormous structures via hook with no safety net and swing your way across the levels at a breakneck pace. These make up the majority of Cyber Hook‘s levels. Getting to the finish line is typically not problematic, as it should be. Easy to get one point but hard to get three points is a good rule for a game like this.

But Cyber Hook isn’t satisfied with being that kind of game. As a breezy little time trial game about swinging around, it would have been perfectly fine. Instead, the rest of the levels are dedicated to endless instant death traps, poor signposting, and generally awful design. It’s perfectly fair to call the game horribly uneven in its design approach. It’s hard for me to put into words just how insufferably tedious and unenjoyable many of these levels are. They take any joy you may have experienced while swinging around before and dash it upon the rocks.

As I said, purple and red surfaces kill you on contact. Many of Cyber Hook‘s levels are, naturally, entirely made of purple and red surfaces. You’ll often have to swing between them and inside tight corridors where touching the walls or floors will kill you instantly. Some of these sections go on for far too long and aren’t clear about how you’re supposed to progress through them. Seeing these levels typically results in dying dozens and dozens of times while you repeatedly attempt to see how on earth you’re meant to proceed via pure trial and error. Many of these levels also seem designed specifically to make the player go, “No, please don’t make me do this.” For instance, one level is a made up of two tall towers comprised of red and purple objects where you have to carefully travel through the first tower, successfully fling yourself to the other via platforms that aren’t properly placed for this, only to reach the bottom of an identical tower in the opposite direction. The tiniest mistake results in death. It’s terrible. 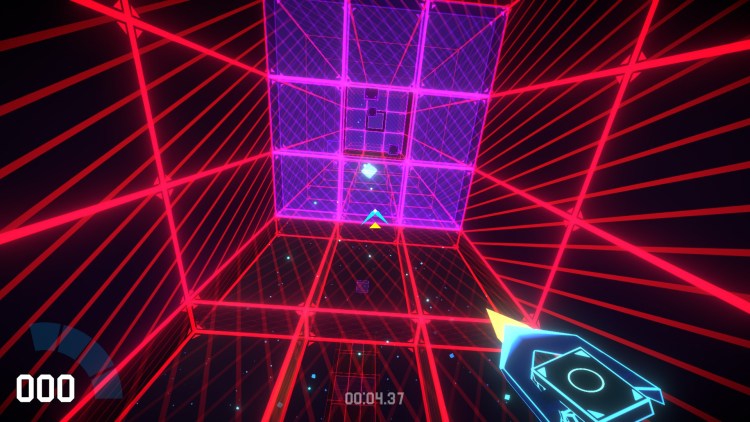 I can see I’m going blind

One of Cyber Hook‘s biggest miscalculations in aiming for these Super Meat Boy-esque levels that focus on extremely careful precision platforming among dozens of objects that kill you instantly is that you can actually see exactly how your character fits into the latter’s world. You can tell when he’s close enough to a saw so as to not touch it. It’s designed for you to be able to inch up walls covered in traps based on you knowing exactly how close the saw can come to Meat Boy’s head. But this game is in the first-person and you can’t see any of that.

Want to land on a yellow platform in the middle of red platforms? Good luck. You have no idea where your hitboxes are. Want to swing as close to purple walls as you can? Better hope you’re not an inch off on your guess of how much space you take up, or you’ll die. These levels don’t just damage Cyber Hook‘s pacing, they demolish it. Upon reaching each one, I had absolutely no desire to play them. But you need to play them in order to see the others. Further increasing the disconnect between the level types, the game will hit you with these levels that can see you dying dozens upon dozens of times to some of the most tedious BS I’ve seen in quite some time, only to follow it up with more easy-going swinging levels.

That’s how I’d sum up the rhythm of playing Cyber Hook. You spend most of your time beating your head against the awful levels and then you’ll do a series of easy levels. As such, the difficulty curve wildly fluctuates between nonexistent and maximum, which makes for a horribly uneven experience. A lot of the regular levels are just plain easy to get three points in. It’s so jarring to go from getting a perfect score on a couple of levels, only to have to spend half an hour carefully trying not to jump into the ceiling of a narrow all-purple hallway and dying repeatedly. 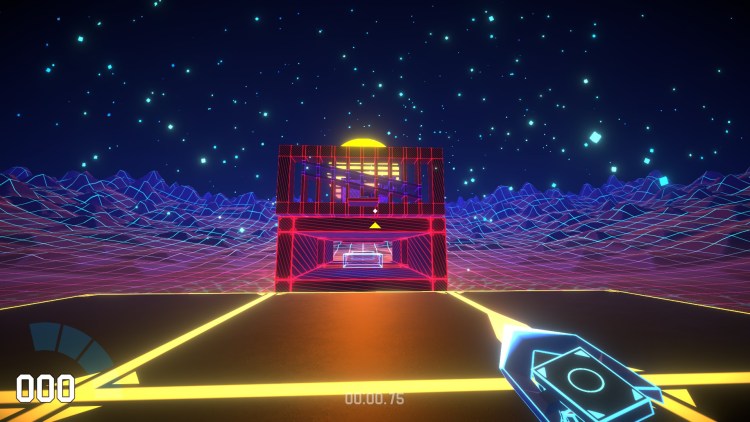 It would have been pretty easy for Cyber Hook to be recommendable but instead, the frustration and horrible level design inherent in the game’s more obnoxious levels only serves to taint the rest of its good qualities. What’s more, these two types of levels are clearly meant for different audiences, so the inclusion of both feels all the more pointless. If both types of levels actually sound good to you and you happen to like horribly frustrating levels where you need to be precise but are incapable of seeing what you’re doing, I might be able to recommend picking this game up.

It’s got an acceptable amount of content, plus leaderboards, monthly challenges, and a marathon mode for all levels too. But it’s too annoying and misguided to recommend to anyone who just wants to swing around, race, and have a fun time. It’s a shame too, as the game is kind of like getting a pizza that’s almost very good. That is, if the person who made it hadn’t intentionally made the sauce’s flavor not fit with the rest for the sole purpose of screwing with people to make a more memorable dining experience. 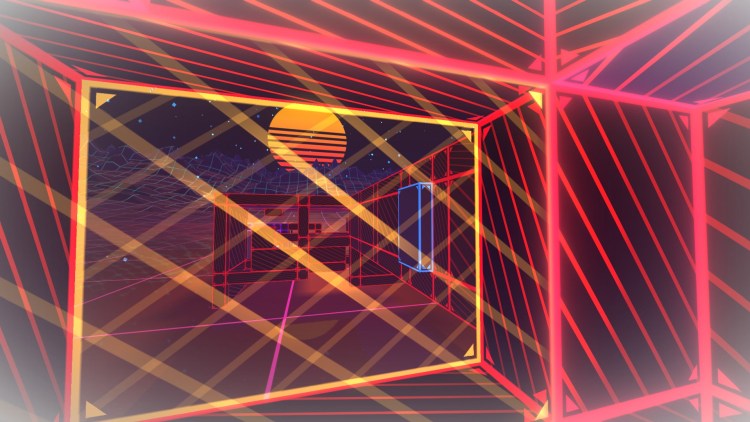 A solid game marred by uneven design choices and bad level design. It can certainly be fun and has some novel mechanics, but it's so unsure as to what kind of game it wants to be that it never finds its footing, despite the fact that it would have been easy for it to do so.