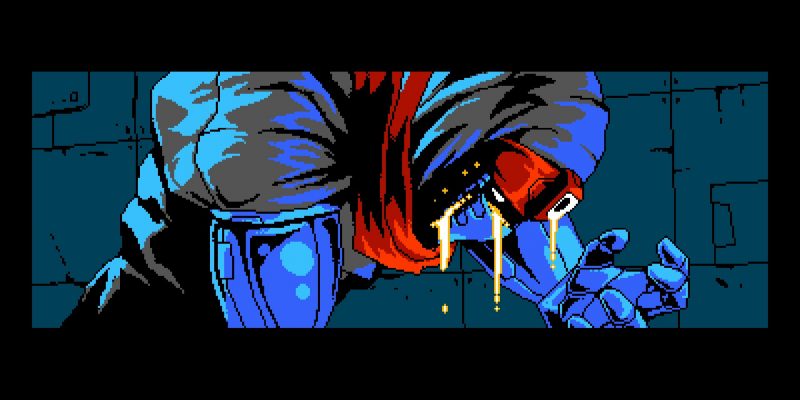 Cyber Shadow is a tough game. For me, the final boss was the toughest challenge that it offered, mostly because it’s got three phases. Because of this, I’m going to guide you through the Cyber Shadow final boss fight and we’ll have him beaten into the dirt in no time. Or vice versa. But you’ve likely already experienced the vice versa or you wouldn’t be here!

The first phase of Cyber Shadow‘s final fight is not only the easiest but is insanely easy in general. After being built up for a significant amount of the game, you finally fight Apparitor. Aaaaand he’s weak as hell. When the fight starts, he’ll do one of two things. If you notice targeting reticules on both sides of the area simultaneously, stay in the middle. As soon as the blue blasts dissipate, he’ll drop down directly on top of you, so use a dash slash to get out of the way. Once you do that, then do another dash slash to get behind him and then hit him in the back as many times as you can.

If he doesn’t launch the attack on both sides, he’ll be attacking most of the area instead. Immediately dash to the side that the targeting reticules aren’t coming from and then stand there. More blue blasts will drop down, so just wait for them to dissipate. If you run into any of it while it’s still on screen, you’ll get hurt. Then, just like the other variation, you’ll want to do a dash slash to get behind him and hack away at him. Regardless of what happens, he’ll then dash to one side of the screen and prepare an attack. Simply jump over it and then start hitting him immediately. He’ll jump into the air to attack you in a moment, so try and jump with him, all the while hitting him in mid-air. If you make use of all opportunities to attack him, then you can beat him in just two laps. Easy as pie. 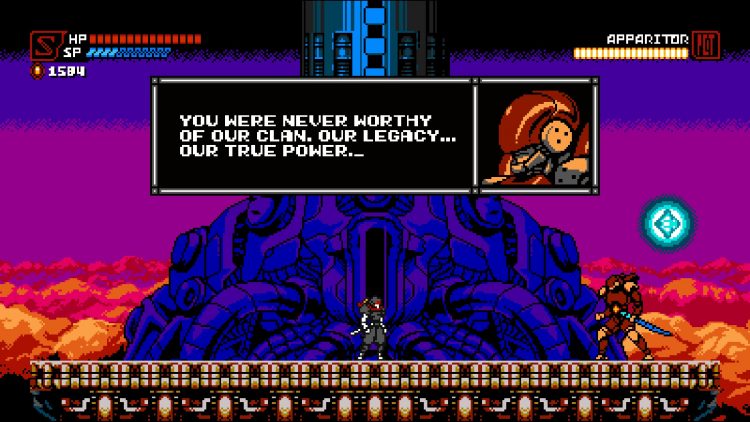 Now that we’re past the simple stuff, things are about to get tricky. Which is quite the feat consider how tricky Cyber Shadow already was. Progenitor has been watching the whole time and will finally start trash-talking you. You’re going to want to hit the glass dome in his center. If you strike it with a regular sword attack, you’ll bounce backward, so be mindful of that. You’ll want to hit the dome, which will cause it to retract, and then jump up and slash at Dr. Progen while he’s exposed. After a few seconds, the dome will come back down and you’ll need to hit it again.

Progenitor really only has three attacks. One of these is that he’ll send a homing fireball thing towards you. Go to one edge of the screen and then dash slash while it’s above you. It will then land near the edge and you won’t need to dodge around it, as it creates a damage zone directly above it. These stick around for a while, so be careful. The easier attack to dodge is that he’ll launch five fireballs that are spaced evenly. Be careful to stay out of their way and you’ll still have time to wail on Progen. But try not to hit the dome while the fire is coming down, as you can knock yourself straight into it. The last attack is that he’ll shoot a few fireballs at you. These don’t home so you’ll want to watch and move out of the way.

You’ll naturally want to practice this some, much like everything else in Cyber Shadow, as you want to take as little damage as possible during this phase. I’m usually able to get through it with only getting hit once or so, but any attacks during this battle do three damage. Once you’ve gotten Progen’s health down to half, he’ll start shooting three of those homing fireballs. These create three damage zones and you probably shouldn’t try and dash slash away from them, as you’re likely to dash right into another one. Learn how much space they leave and do your best to keep dodging attacks while getting some of your own in. 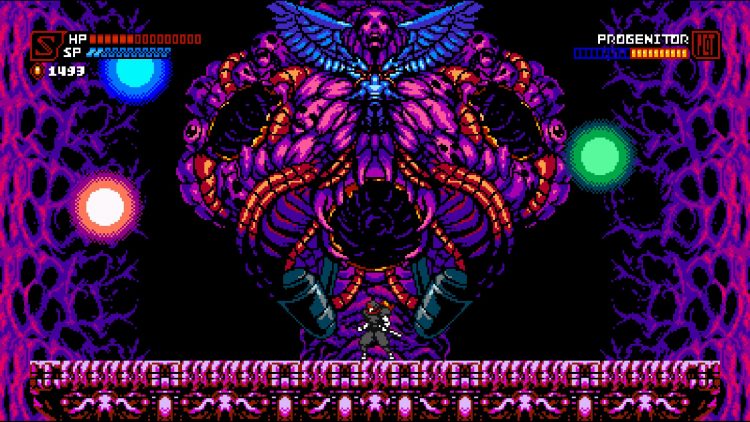 The last phase of Cyber Shadow‘s last boss is the worst part, but only if you don’t quite know what to do. It introduces new mechanics and the most important of these isn’t immediately clear. For the first half of this phase, things are extremely simple. You will hit Progen in the same spot as you did before, but don’t hit him yet. You’ll notice that he’s got three fleshy orb things on his body. Destroy those first. Once they’re broken, red, blue, and green orbs will go off to the side of the screen. When they’re all broken, go ahead and hit him. Once he’s down to half health, then he’ll rise up and you won’t be able to reach him solely by jumping off the ground.

Each of those three colored orbs has a unique property. The blue one will come first and protect you from Progen’s fire. This attack is easy to dodge anyway, so it feels like a bit of fluff. Then the fun begins. Progen will line everything but the very center of the floor with spikes, so stand in the middle! Before this, you’ll be graced with the pink orb’s power, which gives your sword strikes a projectile attack for a bit. Use your downward special, even if you don’t have any sp. No matter what, Shadow will strike upward and launch the pink attack at Progen. This is how you’ll primarily get damage in during this phase. Don’t get greedy.

Now that you’re trapped in the middle and are trying to get your pink sword licks in, the green orb will grant you two platforms that you’ll want to jump onto immediately. Progen will start laying down thorns that grow out of the ground. Pay close attention to them as they’re often tall enough to hit you on the green platforms. As if that weren’t enough, Progen then starts spawning three spinning blades that come after you. This is the only other time you can attack him, but dodging is honestly more important. If you do try and hit him here, you can get hit by the blade attacks as they spawn near him. Get a hit or two in if you can, but be patient. This is an endurance test. Get hit as little as possible and stay alive to hit him with more upward pink sword strikes when you can. If you do that, Progen will die eventually, and Cyber Shadow‘s ending will be in front of you.