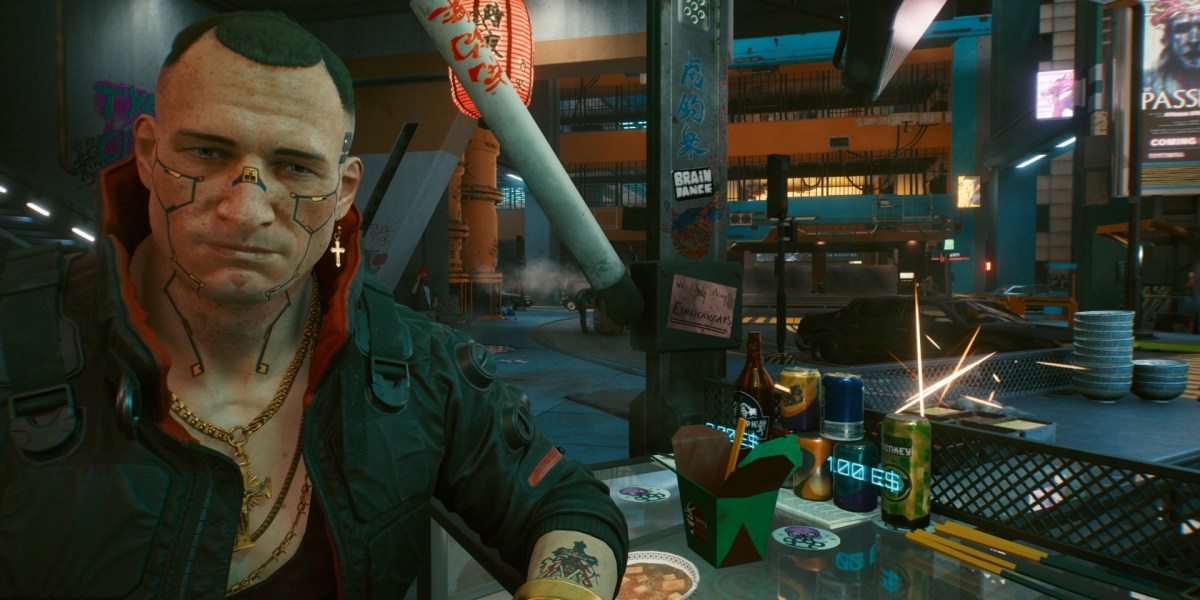 There’s a lot to do in Cyberpunk 2077 and starting your journey in Night City can be quite overwhelming, too. Here’s our beginner’s guide with several tips to help you out.

I’m serious. Although Cyberpunk 2077‘s lifepath prologue basically acts like one big tutorial itself, there are basic mechanics explained after you complete the first mission. Your companion will ask you if you want to see the tutorial, so check that out to see what’s in store.

Everything from gunplay/firefights, melee combat, stealth, and hacking are explained here. As such, you’ll have a general idea of what you can expect as you progress. 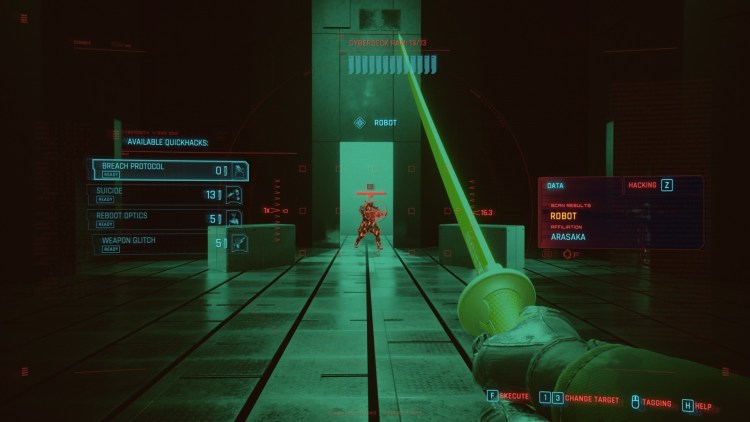 As you explore Night City, you’ll spot several kiosks, vending machines, and terminals that you can access: 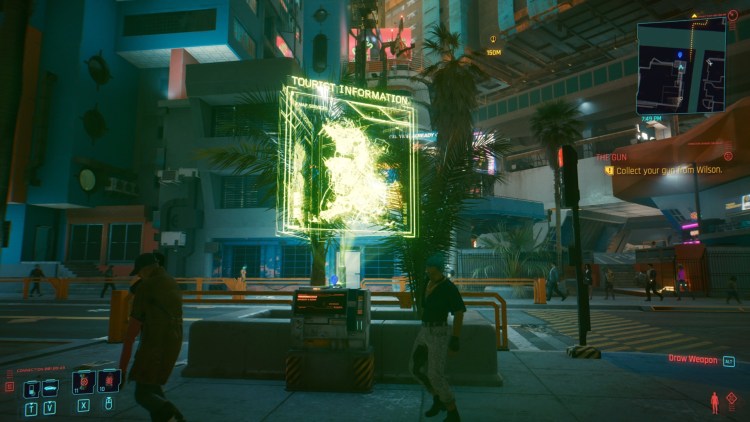 If there’s one nearby (whether you’re on foot or driving), it’ll get saved on your map.

Then, simply interact with one to fast travel to another location with a terminal that you’ve already discovered. 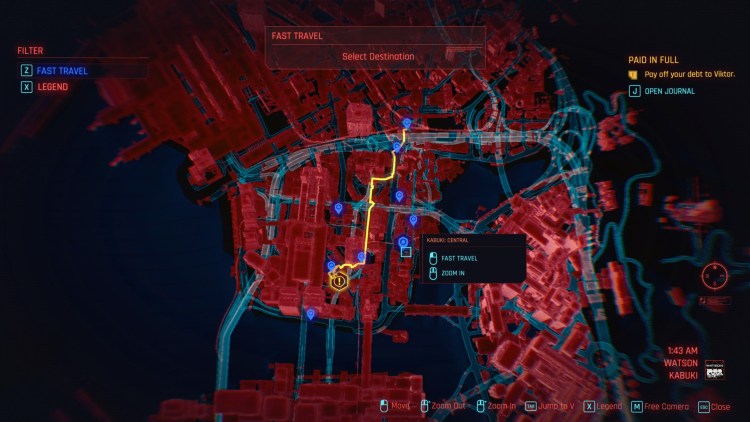 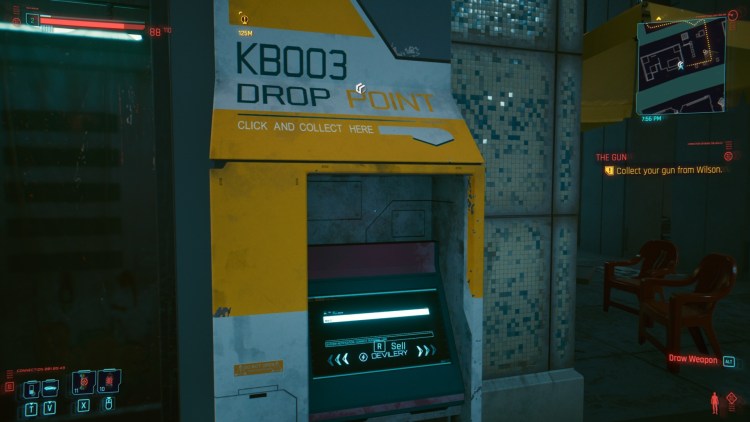 Drop-off kiosks, meanwhile, have a white-colored pin on the map.

Interact with these to sell any unwanted items. You can also do this when talking to vendors, but there are more kiosks in the game world. 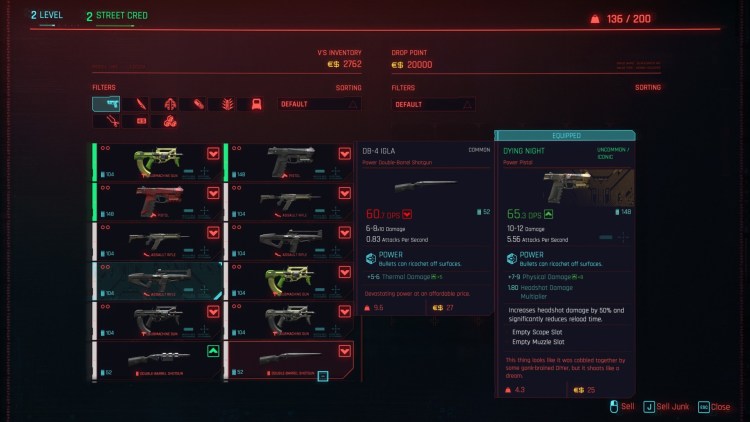 Night City is littered with vending machines. You can mouse over a button on the vending machine to buy a product (usually a restorative or buffing item).

This buff lasts temporarily and you can see the duration when the item is highlighted. Press “F” to pick up the item or “R” to consume it immediately. 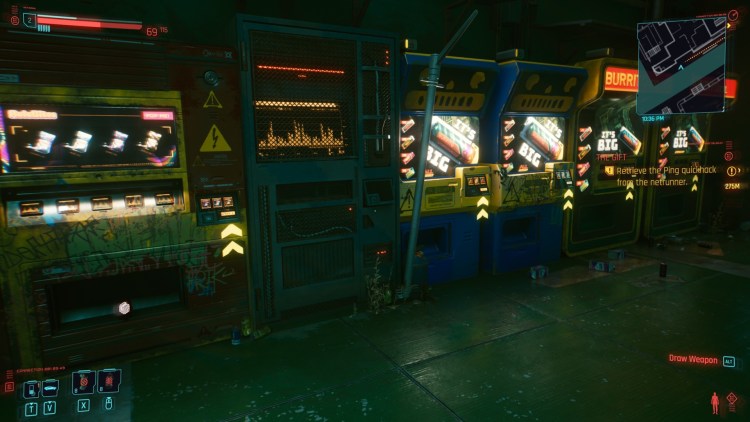 There are several vendor types you’ll find in Night City. The first one you’re likely to interact with is the weapons vendor. This dude or dudette sells you armaments, grenades, ammo, and upgrade components. 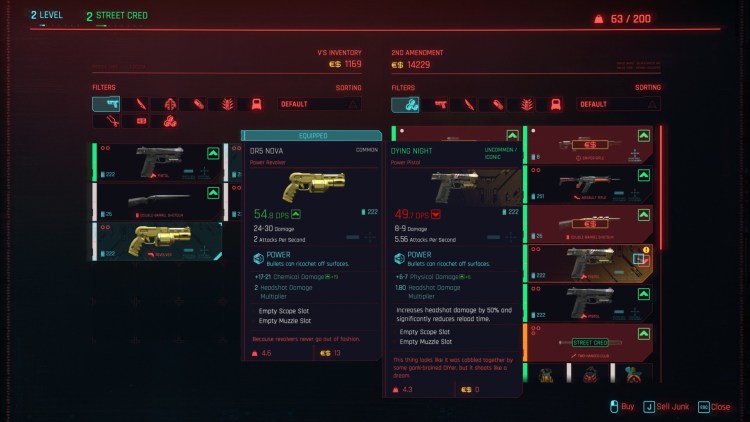 Cyberpunk 2077 also has Ripperdocs. These NPCs sell cyberware (cybernetic implants) that can be used to obtain permanent buffs as long as you have them equipped. 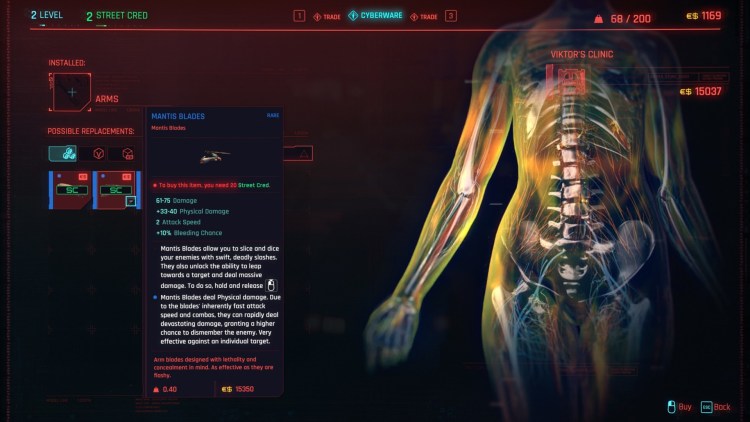 As for Netrunner NPCs, they provide you with components related to Cyberpunk 2077‘s hacking mechanics such as the Breach Protocol minigame. 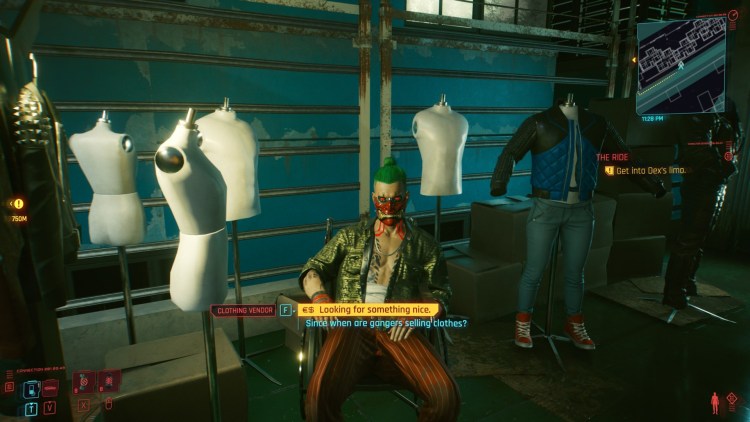 Of course, not every item in Cyberpunk 2077 can be purchased immediately. That’s because there are those that require street cred.

Think of street cred as your reputation. It’s increased through various actions such as completing quests or taking out hostiles. 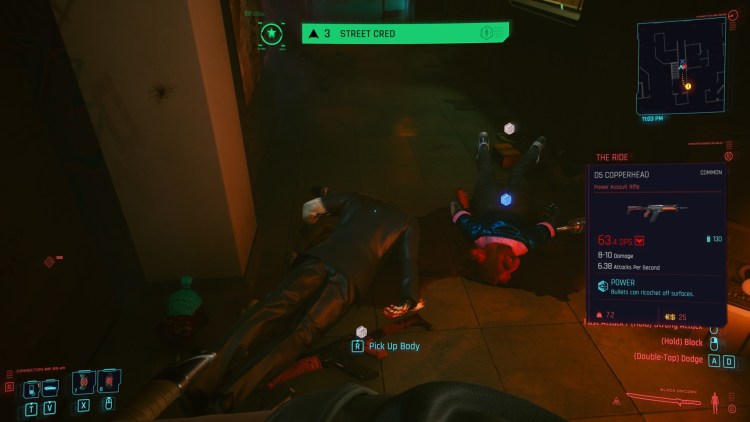 Leveling up and perks

Completing quests and defeating your foes nets you EXP to level up. Each time your level increases, you’ll gain an attribute point and a perk point. But, there’s more.

Cyberpunk 2077 uses a mastery or proficiency system that’s present in certain RPGs. The more you do certain actions (or use specific weapon types), the faster you’ll increase the perk that governs it. For instance, using handguns often increases your mastery rank. This confers additional boons that are independent of your character’s level or chosen perks. 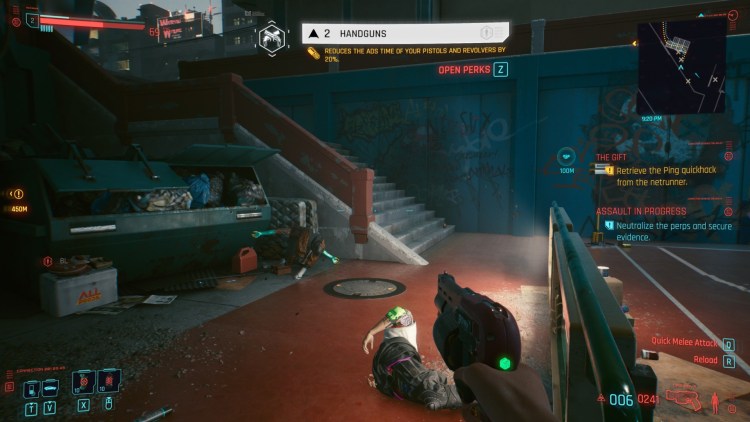 In most open-world action games (i.e., Grand Theft Auto), seeing a vehicle might prompt you to hijack it quickly. Well, that’s not the case in Cyberpunk 2077.

That’s due to the Body attribute. While most vehicles require only level 4 in the Body attribute, others might need you to spend more points on it. You can add some points during character creation and the rest will come via leveling up. 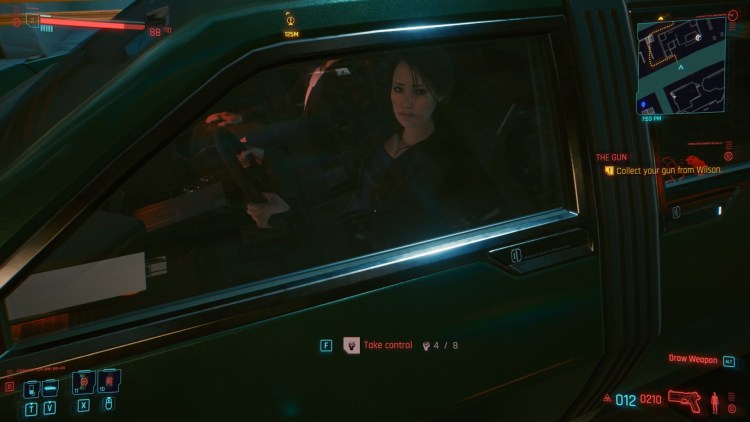 Dealing with law enforcers and lawbreakers

You don’t want to earn the ire of Night City’s police since they tend to be heavily armored, and they’ve got deadly weapons to boot. As such, try to avoid hostile actions like attacking people or stealing their cars in front of the cops.

Likewise, if cops are investigating an area, don’t accidentally bump into them or they might consider it a hostile action. 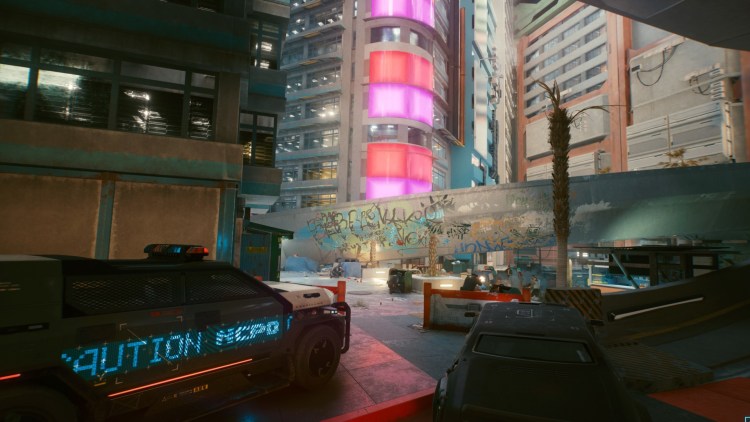 It’s also possible to side with the long arm of the law by cleaning up the streets. From time to time, your adventures in Cyberpunk 2077 will notify you of random encounters (i.e., reported crimes).

Head to the location and eliminate the baddies that might be around. 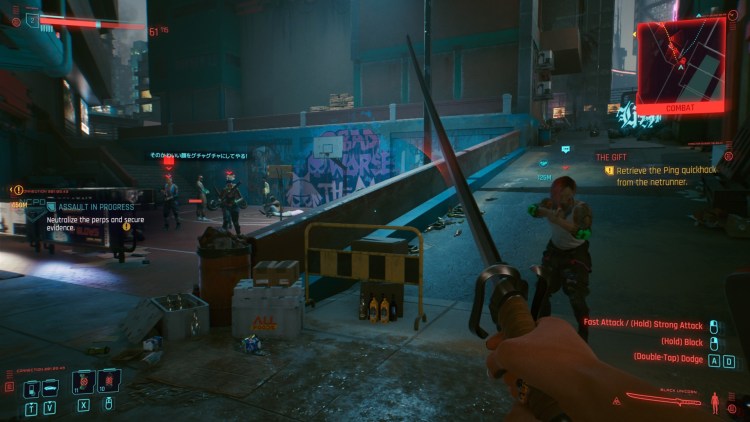 Once you’re done, scan the area (hold the “Tab” key) and find the evidence. This is usually an object that has a yellow glow.

This will complete the reported crime/random encounter and you’ll get some rewards, including cash, character EXP, and street cred. 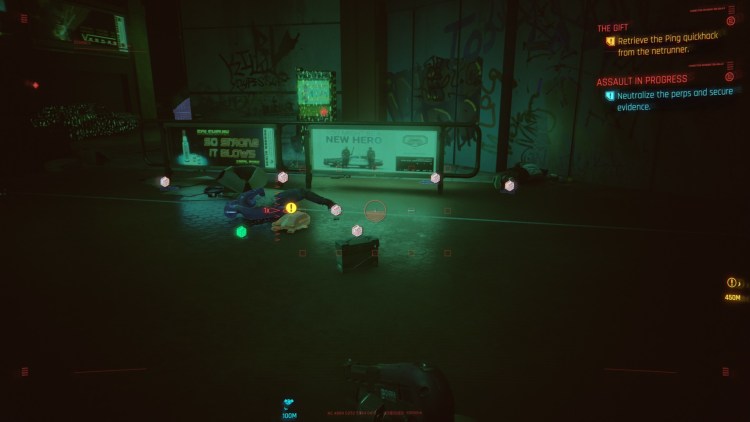 Whether you’re doing random encounters or just regularly exploring, you’ll want to keep scanning your surroundings. This highlights loot that can be picked up as well as objects that you can interact with.

If an object can be hacked, you’ll see “quickhacking” skills that can be used offensively or as support. This is also true for enemies since a lot of folks in Cyberpunk 2077 have implants that you can cause to go haywire. 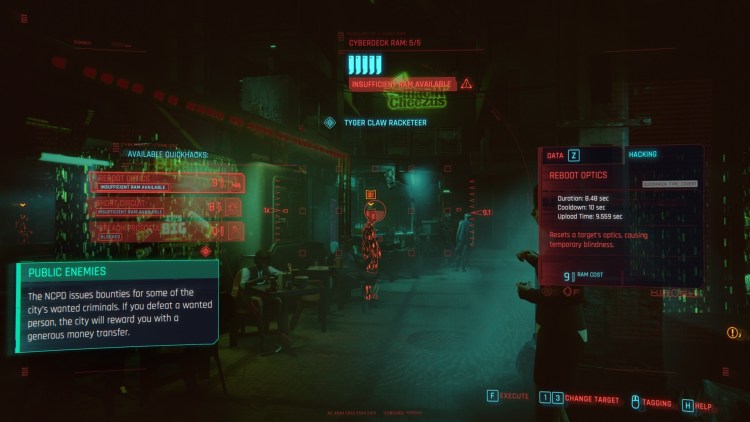 This one will probably make you scratch your head a bit. That’s because Cyberpunk 2077‘s hacking minigame (known as Breach Protocol) doesn’t get its mechanics fully explained. In fact, my first few attempts at these were purely trial and error.

The gist is that you’ll see a required code on the right-hand side of the panel. Meanwhile, the left-hand side shows you various characters. When you select the first one, the timer winds down. Running out of time, or running out of space for the combinations that you can input, will fail the Breach Protocol minigame.

As such, you’ll want to look at the yellow outline when an alphanumeric combination is selected. This is the row or column that gets unlocked, allowing you to input from the selection until the sequence is done. 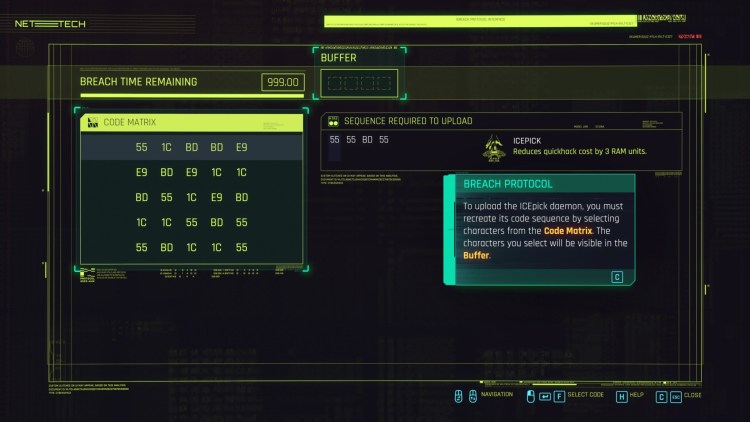 Take your time with the game

Cyberpunk 2077 has a massive world that can fully immerse you. While you do have main quests that pop up, don’t forget various sidequests from other NPCs, including the Fixer.

The Fixer hands you additional gigs that you can complete, mostly quick “run-and-gun” activities or “meet/handle an NPC” objectives. Lastly, don’t forget that some of these interactions and encounters have dialogue options, too. 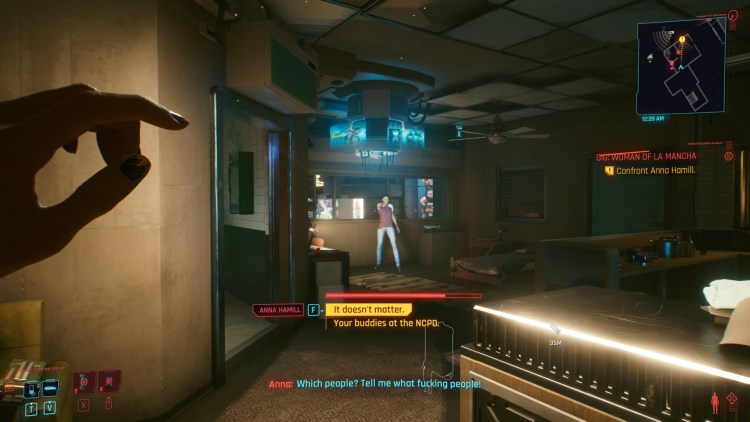 By Kurt Perry30 mins ago
Guides

By Martynas Klimas18 hours ago
Guides