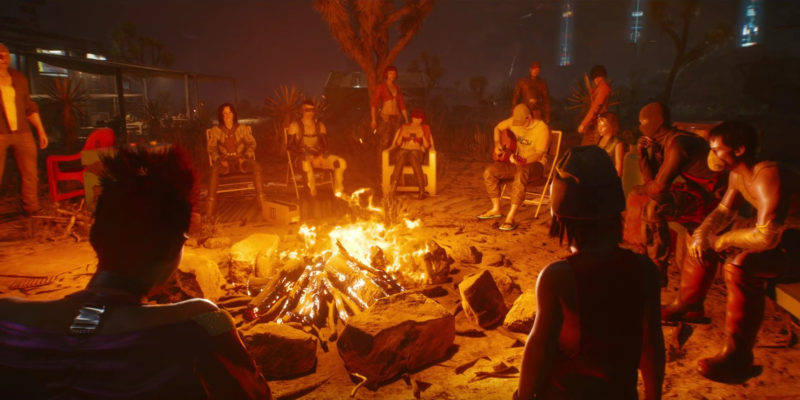 Today’s Night City Wire event was about two things: Keanu Reeves and Cyberpunk 2077‘s music. We already know how the former is (breathtaking), but the state of the latter has been a long unanswered question. As it turns out, the game will have both original tracks and features from a ton of popular bands and artists, yes, other than Grimes. And because it’s likely to be the most highly-streamed game when it comes out, Cyberpunk 2077 will also have a DMCA-friendly mode for content creators.

For those wondering what kind of tunes will blast from the futuristic cars in Night City, there won’t be any light-hearted American pop. The soundtrack of Cyberpunk 2077 is decidedly deep and dark, albeit warm because of the use of actual synthesizers from the ’80s, at least, according to the game’s composer Paul Leonard-Morgan. Overall, the original tracks in Cyberpunk 2077 will be a mix of ’90s inspired EDM, industrial and rave music, all adapted to fit the game’s unique aesthetic.

Besides the game’s original score, players can look forward to hearing a plethora of real-world musicians in Cyberpunk 2077. Besides Grimes, the game will feature the talents of Nina Kraviz, Gazelle Twin, Rat Boy, Run the Jewels and more. At first, this announcement probably raised concerns for streamers and other content creators, who want to avoid any DMCA claims while playing Cyberpunk 2077.

In all fairness, those concerns would be well founded. Streamers on Twitch began getting hit with DMCA claims by the bus-load. This sudden move forced streamers both fledgling and well established to delete hundreds of clips going back months if not years. To make sure that content creators won’t have to worry about having their channels taken down, CD Projekt Red is also including DMCA-friendly mode in Cyberpunk 2077. Functionally, the mode will simply replace certain copywritten tracks with other music, so don’t worry about driving around Night City in complete silence. CDPR has it covered.