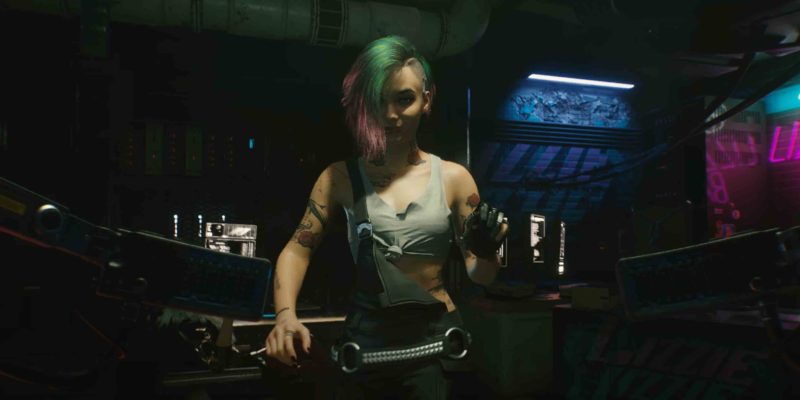 Cyberpunk 2077’s latest trailer, ‘The Gig,’ debuted early yesterday on the CD Projekt RED live stream Night City Wire. It teased more of Night City, introduced the badlands that surround it, and showed off several missions from the story. ‘The Gig’ is a highlight reel like we’re used to seeing for upcoming games, and it packs in plenty of details. This is the kind of trailer that rewards those who slow it down.

While the trailer does skip around to various settings and situations, it tells a coherent story. More of a primer, if you will, for what to expect in the full game. We’ve heard details about the protagonist V and his partner Jackie Welles already, but this trailer reveals specifics about what they’re after. ‘The Gig’ is all about a contract early in the game, and dealing with the fallout.

Notice the “Passion” advertisement on the right which looks a lot like Mel Gibson’s famous film.

The trailer starts with several camera pans of the cityscape to show off the attention to detail in Night City. Neon ads fill the streets and the skyline itself, most of which appear to be unique and detailed. Ray-tracing seems meant for the cyberpunk genre. The realistic lighting effects add a sublime mood to the city despite how grungy it is.

The city looks huge, too, and very alive from each perspective we get. CD Projekt RED seems to have done an incredible job in simulating busy city life. In fact, every part of this trailer screams details, from the backgrounds in night clubs to the unique outfits on every NPC.

‘The Gig’ also takes the opportunity to show off more of the characters and their colorful, but believable personalities. CD Projekt RED demonstrated its clear mastery of character design in The Witcher 3, and it’s evident in this trailer too. Jackie Welles seems like the life-of-the-party wherever he goes, while Dex continues to work the criminal overlord angle perfectly.

Speaking of bad guys, check out the creepy cyborg known as Adam Smasher who was revealed today. The character was previously introduced in the Firestorm book series, but today we saw his ugly mug in the game. Smasher is an Arasaka enforcer, and it’s probably a safe bet that he will be safeguarding a certain, priceless chip.

Johnny Silverhand (played by Keanu Reeves) was also teased again in the trailer, though his role in the story is still unclear. Silverhand is digitally linked to V in some way, and described by the developers as a “digital ghost.” Given Silverhand’s backstory, his role is likely linked to the mysterious “chip of immortality” as well.

There will be no shortage of gunplay and high-intensity firefights in this game. The trailer previewed several encounters related to the main story and showed V wielding pistols, SMGs, shotguns, and grenade launchers. Cyberpunk 2077 is confirmed to include a long list of melee weapons, firearms, grenades, and equipment to take out enemies. This trailer only scratched the surface as far as weapons are concerned, however, it did show off some more enemies.

Most of the interesting new enemies were either machines or cybernetically-enhanced humans. Most of these appeared in polished looking environments which suggest they could be part of the Arasaka security arsenal. It makes sense for a rich corporation to rely on some loyal, killer machines to protect them.

Mounted sentries with laser targeting systems and an armored drone with turrets could be seen. Also of interest was the human hostile operating an exosuit with shields and a heavy machine gun. These enemies look tough, and there are sure to be plenty more deadly surprises that await in the full game.

The more we see of Cyberpunk 2077, the more massive and impressive it looks. CD Projekt RED has clearly been hard at work, and for a long time at that. Today’s trailer was short, but we should start to see more regular information updates about the game as November nears. The developer has already confirmed that more episodes of Night City Wire are planned for the near future. When CD Projekt RED commits to a date for the next reveal, we’ll let you know.

Cyberpunk 2077 is currently planned for release on November 19 and will be available to purchase on all major platform stores for $59.99 USD. However, you can get every game CD Projekt RED has ever made including Cyberpunk 2077 for $88 USD right now.