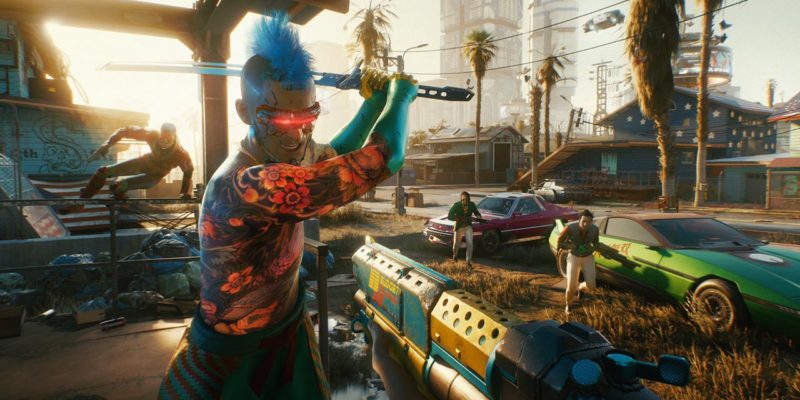 Players have been looking forward to diving into the world of Cyberpunk 2077 ever since it was announced. Lately developers have been teasing aspects of the game, and a third Cyberpunk 2077 Night City Wire showcase has arrived. Previous episodes shared some details on gameplay systems, destructive weaponry, and much more. The new Night City Wire trailer gives you a small glimpse into what life is like in each area.

Titled Postcards from Night City, various themes were explored. Cyberpunk 2077 fans got a glimpse into opposite ends of life. The trailer itself showcased the breath-taking visuals of the futuristic city. The very center of the city appeared to be very entertainment oriented, with a mix of traditional bars and lounges with VR headsets. Likewise, you are able to explore numerous districts and cruise the streets above the high-rising skyscrapers.

Take on Night City as part of a gang

On the other hand, The Cyberpunk 2077 Night City Wire event showcased some of the worst aspects of the city. There are shanty towns and plenty of gang violence, with crime rates that continue to rise. Also, gangs are able to hire you as you complete and explore more of Night City, as shown in the Gangs of Night City trailer. Here, only the strongest survive as you complete a variety of gang missions. There is no doubt that you will engage in a colorful assortment of conflicts throughout the city.

At the end of the Postcards from Night City trailer, you are also presented with a link to a working website. You can access the website to learn more details about Night City. Although the information is brief, you can learn about the City’s history, transportation, and more.

As we draw nearer to the end of the year, so to does the release of the highly anticipated Cyberpunk 2077. The trailer only provides us with a small glimpse into the action, though all will become clear when the game releases on November 19. However, it appears that players will be able to experience both extremes of city life.

Call of Duty: Black Ops Cold War sniper rifles will be nerfed for the beta