Today, on Cyberpunk 2077‘s prior release date, CD Projekt Red dove back into the game in its latest Night City Wire. The show covered the mysterious rocker-terrorist Johnny Silverhand, as well as the game’s music. But that wasn’t all the developer offered this fine Thursday. The company also released a new gameplay trailer, bringing over five minutes of in-game footage. Character interactions, customization, and another look at the world of Cyberpunk were among the latest highlighted in the video.

In Cyberpunk 2077, character customization goes deeper than your choice of dangly bits. Shown for the first time today, we got a brief glimpse at what will likely be your first three hours of the game. Customizing your character begins at the start, where you can choose from a wide variety of hair styles, tattoos, teeth, makeup, and much more. However, that’s only the beginning. Starting at around 2:40, the trailer gives us a look at the cybernetic enhancements you can install. We’ve seen a few examples before, such as the gnarly Mantis Blades that jut out of your arms. However, the gameplay trailer also shows options to upgrade your character’s circulatory, immune, and nervous system. It’s a sandbox within a sandbox.

Customization also extends into your skills. The Cyberpunk 2077 official gameplay trailer gives us a look at abilities and perks. Earning levels adds points you can spend on attributes and perks. Leveling up your reflexes improves reaction speed, allowing you to move and attack faster. There are also passive skills to acquire. You can give the aforementioned Mantis Blades a 200% damage boost — if you’re going for that melee-focused run.

Glow up, power up

The official gameplay trailer also dives into the story somewhat. And it’s with this that I must offer a mild warning. If you’re trying to avoid all spoilers of any kind, then it might be best to not watch the trailer. It explains your primary drive in the story, as well as Johnny Silverhand’s motives. Granted, it’s very likely you learn all this within the first few hours of the game. But if you want your first playthrough of Cyberpunk 2077 to be as fresh as possible, maybe you should avoid this and wait just a bit longer. Well, wait just a bit more than you have already.

Cyberpunk 2077 is coming to PC via Steam, the Epic Games Store, and GOG, supposedly on December 10. 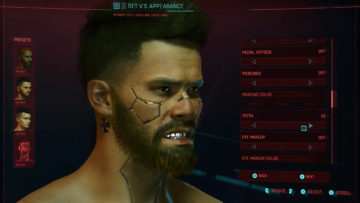