Developer Jagex Studios has reworked daily challenges in RuneScape. This update aims to make them more rewarding while also tackling some of the previous system’s core problems. Moving forward, players will receive three new daily challenges to complete every day. This has been increased from just the one that players could earn before.

The old system would assign the player a challenge that was specific to a certain skill. Completing this would reward experience in that skill, equivalent to one Huge Lamp. Now though, rewards provide the equivalent of a Large Lamp instead. But, it works out better overall as up to three rewards a day can be earned.

Another change made to daily challenges in RuneScape is that it’s now cheaper to re-roll them. Previously, 25 Vis Wax was required to do this, but it has been lowered to just 10. Furthermore, extending a daily challenge in order to receive double rewards now costs 30 Vis Wax, down from 50. Extending a challenge will also double the contribution it makes to your weekly progress.

Speaking of weekly progress, new to RuneScape is the Weekly Reward Track, a system that rewards players for completing their daily challenges. Every three completed daily challenges gives an additional weekly reward. Up to a maximum of seven of these can be unlocked per week. 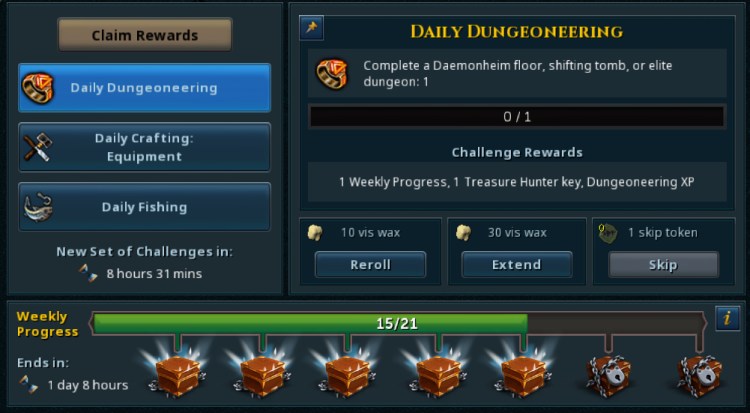 The rewards from the Weekly Reward Track vary between a mix of items available from Treasure Hunter, and the Travelling Merchant. These includes useful items like Silverhawk Down, Dungeoneering Tokens, Cash Bags, Gift For the Reaper, or even Deathtouched Darts. Ironmen accounts will not be able to receive some of these rewards.

Daily challenges aren’t the only thing that RuneScape players can now benefit from. Premier Club 2022 has also been released alongside the daily challenges rework. It offers the best deal for paid membership, costing $69.99/£49.99/€64.99 a year or your regional equivalent. As well as all the usual bonuses, this year’s package also contains the Dawnforged Armor Set, Greatsword Override, Sol The Unicorn pet, and 100 additional bank spaces.

The next DLC character for Guilty Gear Strive is Happy Chaos

By Sam Robins19 mins ago
News

By Keren Philosophales20 hours ago
News