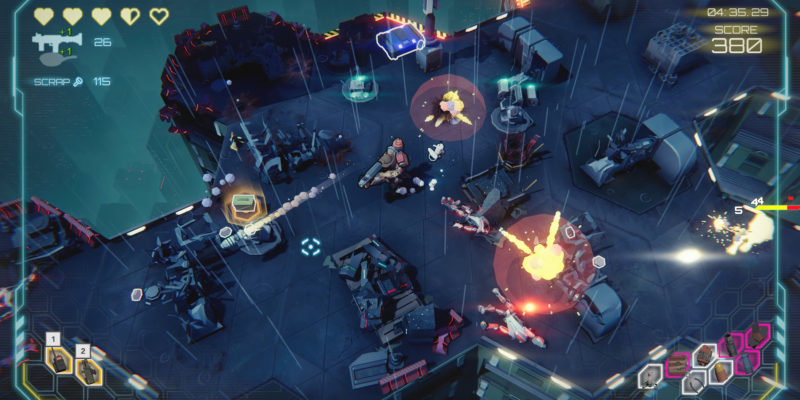 It’s not every day that the term “cyberpunk top-down looter shooter” can accurately describe a game. However, that’s about the only description suitable for developer Star Drifters’ latest endeavor, Danger Scavenger. First announced just last month, Danger Scavenger is available on Steam right now for $14.99 USD.

The machines are fighting back against their creators and it’s your job to teach them a lesson. The Scavengers are tasked with taking the fight to these machines and overcoming them to save the world. Despite once being shunned by society, the people now rely on the Scavengers.

The gameplay flow of Danger Scavenger is one that should be nostalgic for many retro gamers thanks to its old-school, simplistic approach. You move through levels collecting various power-ups and weapons to make mowing down legions of bots easier. Among these includes the likes of a sniper rifle, shotgun, and katana.

Each of these weapons has a random unique secondary effect, similar to the modifiers found in Borderlands. Some examples of these effects include a chance to throw a deadly saw your enemy’s way, a drastic increase in fire rate, or occasionally applying bonus elemental damage. Like many other looter shooters, all the guns in Danger Scavenger have an assigned rarity that impacts their usefulness.

Throughout Danger Scavenger‘s levels, you can also purchase various upgrades from the in-game shops. There are plenty of upgrades to pick from such as a knife that drastically increases backstab damage or a drone that will automatically target nearby enemies.

This isn’t the first game Star Drifters has published. It is also responsible for Driftland: The Magic Revival, a relatively successful real-time strategy game released last year that currently has Mostly Positive reviews on Steam. If the generally great reception to Star Drifters’ first game is anything to go by, Danger Scavenger might be worth checking out.