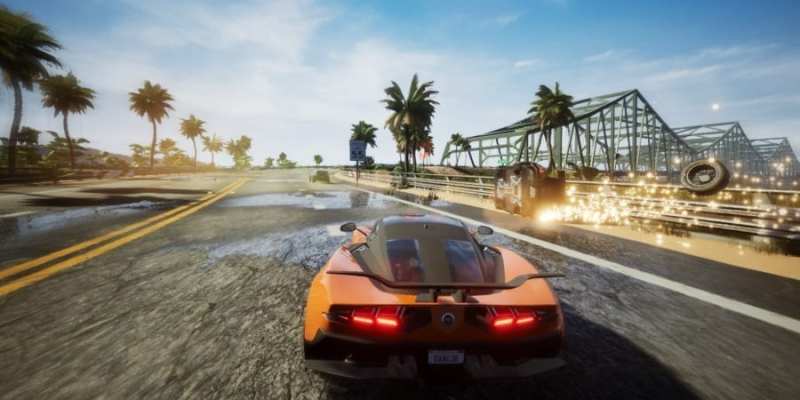 I wouldn’t say that racing games are my favorite genre, but they hold a special place in my heart. One of the first racers I ever poured hours into was Ridge Racer on the PlayStation 1. The constant drive to get that first place win was always a hanging over my head. Then, unlocking every track and car easily became a personal challenge for me.

Over the years, many other arcade racing and driving titles have weaseled their way into my eclectic library. Split/Second, Sega Rally, and even casual ones like Crazy Taxi are just a few that I’ve come to enjoy. None of these, though, provide as many crashes and explosions as the Burnout series. And Dangerous Driving is the closest you’re going to get to a spiritual successor to that franchise.

There are a number of different race types in Dangerous Driving. You can go head-to-head with a rival, sprint to the next checkpoint, or beat out five other drivers. Within each race, you’ll have to battle a number of different obstacles. Those obstacles come in the form of oncoming traffic and potential crashes from your opponents. If you think you’re a defensive driver, it might be wise to become a more offensive one in order to survive being completed lapped in the races that lie ahead.

The main gameplay mode breaks down in a very straightforward fashion. You’ll first enter the Dangerous Driving Tour. Here, you’ll be able to test your skills through the ranks of each type of vehicle. Starting out, you’ll have to earn your stripes through the sedan class and then make your way up into the more top-tier vehicles. 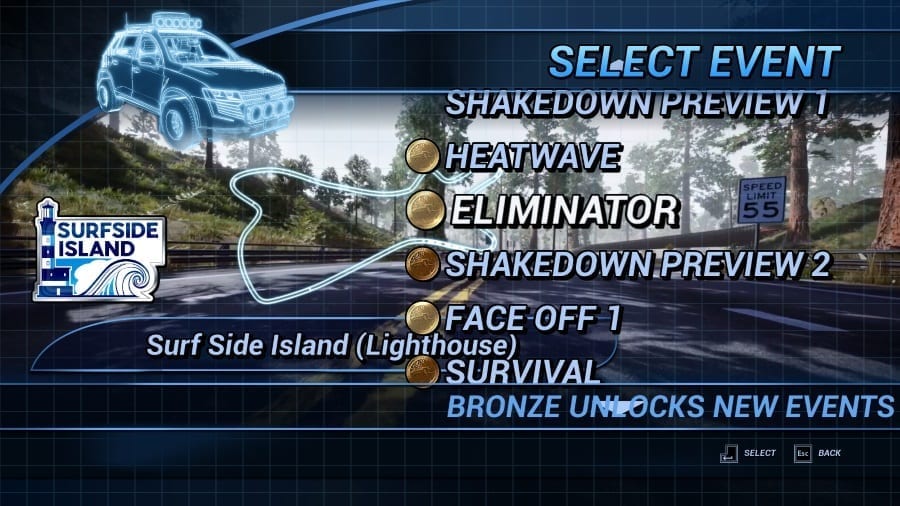 There is a pretty good mix of race types within each vehicle class. You can ride unlimited boost (as long as you don’t stop using it or crash) in Heatwave, or run as long as you can without crashing in Survival. There are also one-on-one races with Face Off and of course, your standard lapped challenges. After doing your best to ace them all, your final test comes in the form a Grand Prix race. Once this is completed, new classes, races, and cars will open up.

One of the biggest standouts of Dangerous Driving are its in-game visuals. Moonlight rides in the snow have a blueish hue to them, while desert scenes are rich reds and yellows.

Each map has a style of its own, rich with colors and lens flares. Most times when these are present in a game, lens flares become more of an additional style, even at times becoming an annoyance (I’m looking at you, Battlefield). 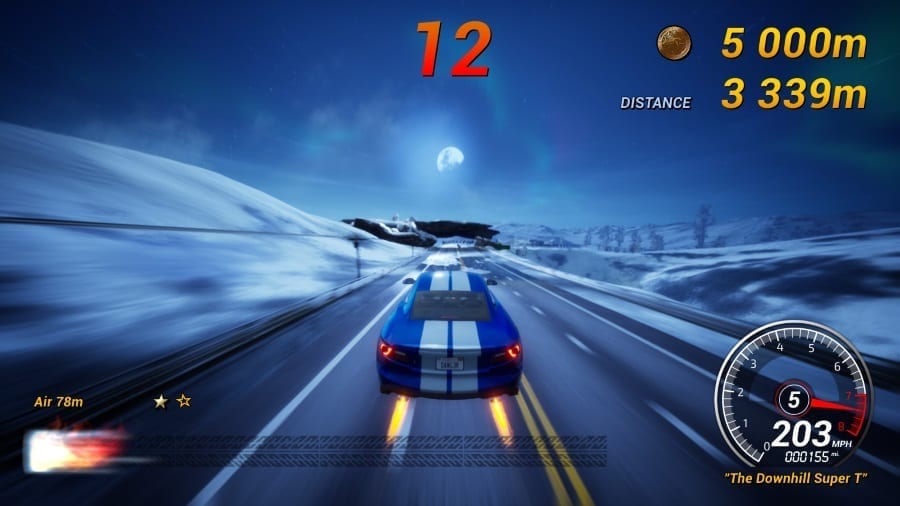 Dangerous Driving manages to pull these things off very well, not sacrificing performance with its visual polish. There are quite a few weather effects that can be seen on the tracks, including standing water and snow. However, these do not impact your driving whatsoever, which was a bit of a disappointment to see.

I did find it rather odd that the game doesn’t include a soundtrack. I mean, that problem really can be resolved by playing your own Spotify playlist in the background, or even the playlist provided specifically for the game. But, I did find it odd that the opening of the game does a great job amping up your experience with a music track to kick things off. I would have even been okay with some good old butt rock playing along during my high-speed runs. And if you don’t have Spotify? The free version with commercials will have to suffice. 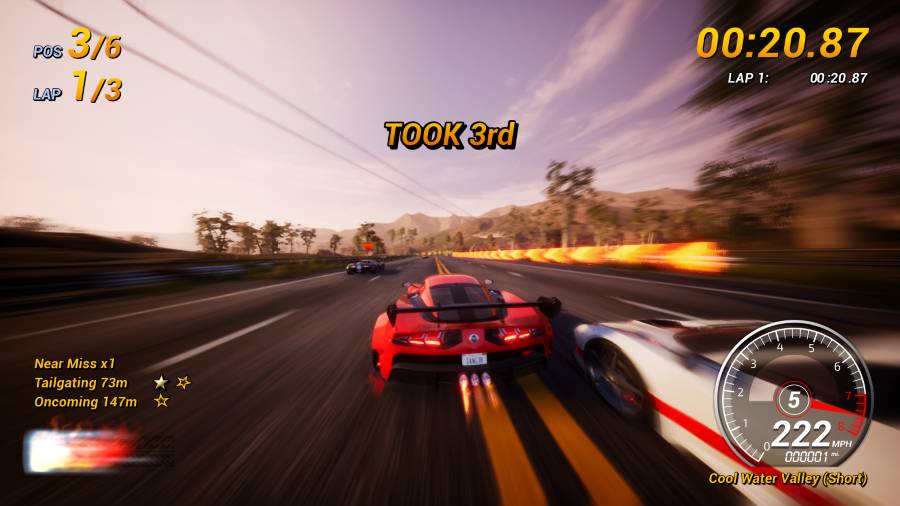 Although the game doesn’t include a heart-pumping soundtrack, the sound effects in the game are superb. When you pass a large freight vehicle on the opposite side of the road, your car will rock with the visible suction from the passing vehicle. The sound for this is very convincing, not to mention the rest of the screeches, crunches, and metal-on-metal contact. Even the muffled sputters from the supercar provide a very authentic sound experience for an arcade racer.

AI, Collisions, And Physics On The Fritz

Much of Dangerous Driving stays true to its racer roots. This is especially the case when emphasizes its similarities to the Burnout franchise. Things like the boost meter and even races align with previous Burnout titles. However, the biggest thing that started to work against my overall experience was with the AI and physics system.

The AI system in the game starts to become frustrating once the game starts raising its difficulty. In the later levels, small crashes can impede your potential to place first. Crashing will leave you anywhere from 10 to 15 seconds behind if you were neck-in-neck with a rival. This wouldn’t be as bad if I couldn’t see each time a competing car zipped past me unscathed. It’s almost as if they can do no wrong in the eyes of the game. There are times when multiple vehicles will crash within a few feet of each other but, more times than not, an opponent will simply zig and zag through the wreckage without even a scratch. 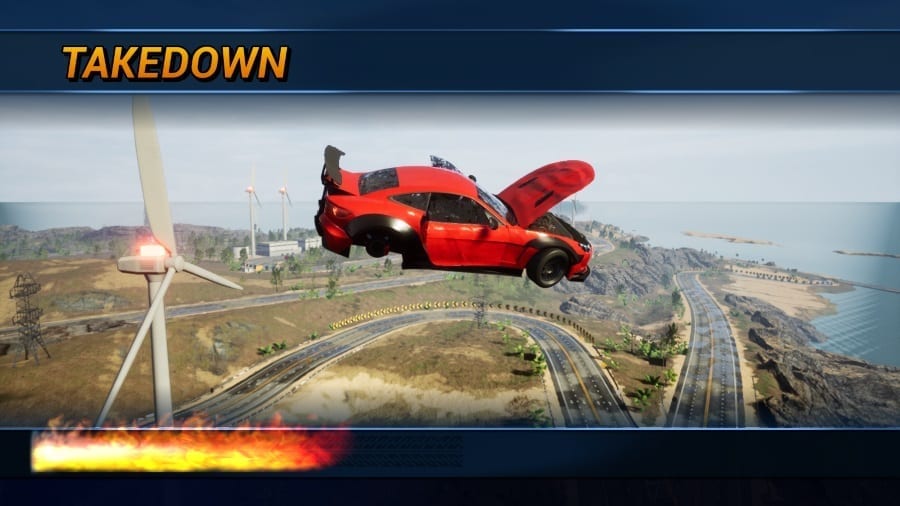 I tied the physics into this section as it very much ties into the AIs performance. In many other racers, you can see the sway and movement of vehicles even at top speeds. This allows for a more realistic interpretation of where NPC cars will end up and even how the AI will respond. Even the way a bump from a nearby vehicle will affect your maneuvering comes into play. But, with Dangerous Driving, there is a noticeable stiffness with the physics system, which can also be seen in how the AI reacts to other cars on the road. Hitting a vehicle also never deals the same result. Sometimes, you’ll send another car into the guardrail. Others, you’ll be flung into the air. I’ve even had instances in first-person mode, where I literally went through the car in front of me without repercussion.

Honestly, being that Dangerous Driving was developed by two of the original creators of the franchise, I was expecting more Burnout than anything. However, the final product is mostly just unremarkable. There are elements of fun to be had – especially in the Heatwave and Survival race types – but looking at the overall game reveals just how lackluster it is at its core.

There’s no doubt that you’ll find the visuals and sound effects are two of the most polished pieces to Dangerous Driving. However, the rest of the experience feels more like something that is still in the early stages of development or even an Early Access title.

If you’re expecting this spiritual successor to be a carbon copy, you’re probably going to be disappointed. There are too many blemishes within the gameplay, AI, collision, and physics systems, which in the end leave this experience feeling more than a little shallow.

The most impressive piece to Dangerous Driving is its aesthetic design. Each map is vibrant and awash color and the sound design has noticeable polish. However, the rest of the game feels rather shallow, especially for a spiritual successor to the Burnout series.